This insect keeps moving along. Two more counties in western PA have discovered the insect, Armstrong and Washington. I expect we will see more of it before the year is out. There is some good news however. The Evanston Review has reported that a parasitic insect has been released by the US Forest Service in two cities (Evanston and Chicago) for experimantal treatment.
For the full story on the insect release go to:
http://www.pioneerlocal.com/evanston/news/1668112,evanston-ashborer-071609-s1.article
(Evanston Review, July 16, 2009)
Emerald Ash Borer Found in Armstrong and Washington Counties Pennsylvania; Quarantine Expanded
(PA Dept. of Agriculture, Harrisburg, July 13, 2009) Campers and homeowners statewide are urged to not move firewood!
For the full story go to:
http://www.agriculture.state.pa.us/agriculture/cwp/view.asp?Q=153142&A=390
Posted by David R. Jackson at 3:00 PM No comments:

The Gypsy Moth has left the County (and State) 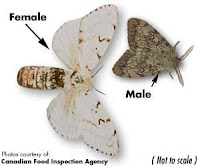 Most of you probably will not be surprised to hear that the Pennsylvania DCNR is finding that there has been a near-complete collapse of the gypsy moth population in the state. This is very much what many of you reported when you filled out the Gypsy Moth Activity Report on the county’s gypsy moth web site. Many thanks for your efforts – and for your unique observations in the text box. Such surveys are extremely helpful in getting a big picture view of what is happening in our large county.

The general collapse occurred as a result of the extremely unseasonal rainy weather that the whole of Pennsylvania experienced during late May and June. On three separate occasions, stationary fronts parked themselves over the Ohio valley and poured rain on us for a whole week. These were very favorable conditions for the pathogenic fungus, Entomophaga maimaiga, to grow from strength to strength until it killed even strong, late-stage caterpillars all over the county.
Please Report any Flying Moths
Even though it’s pretty certain that we have had a total gypsy moth population collapse, there is still a tiny chance that small residual populations survived in some parts of the county. The best indicator that this has happened is the presence of flying brown gypsy moth males and white non-flying females present on trees. If you do see any adult gypsy moths, please report them online on the county’s gypsy moth web site (www.co.centre.pa.us/gypsymoth).
As always, negative findings (no gypsy moth adults seen) are very important, as a reported absence of gypsy moths is a significant event in itself. (A negative report only takes 10 seconds to make; a positive report takes less than 1 minute.)
Identification Tip: Gypsy moth is one of the few moth species in N. America which flies during the day. Another telltale sign that it’s a gypsy moth is its zigzag flight path as it tracks the scent of the pheromone produced by the female. See the web site for pictures of male and female moths.
(Edited from the Centre County Gypsy Moth Coordinator - Gypsy Moth News, July 2009)
Posted by David R. Jackson at 9:06 AM No comments:

Biomass magazine recently reported on a group of foresters from Pennsylvania who traveled to Austria a year ago to see how the nation has managed its forests for multiple uses for centuries. According to the article, Austria, “which is about two-thirds the size of Pennsylvania, has 1,560 district heating plants using woody biomass—about 20 of those are combined-heat-and-power (CHP) systems. Soon 50 percent of Austria’s energy will come from renewable resources, with 15–20 percent from wood.”

Smethport, a small town in northwestern Pennsylvania, will soon be online utilizing the same technology. The town wants to be the first small town in the U.S. with a woody biomass-fired combined-heat-and-power district heating system.
To read the full article, visit the Biomass magazine website. http://www.biomassmagazine.com/article.jsp?article_id=2712
Edited from the Society of American Foresters E-Forester (June 29, 2009)
Posted by David R. Jackson at 11:52 AM No comments:

According to new research by ecologists at the University of California–Berkeley, canopy loss in eastern hemlock forests as a result of the hemlock woolly adelgid also is setting the stage for the invasion of non-native plants. The canopy decline leads to even greater invasion of non-native plants when combined with a high concentration of the plants’ seeds and white-tailed deer in affected areas.

For more information, visit the University of California–Berkeley website.
Edited from Society of American Foresters E-Forester June 15, 2009.
Posted by David R. Jackson at 8:41 AM No comments: