It’s likely we’ve all seen the popular media press about court cases against the manufacturer of Roundup and other glyphosate producers. This has caused considerable concern for some people who would otherwise benefit from its use for controlling competing and invasive vegetation. The media is effective at raising alarms, but less so about a thoughtful analysis of the science.

What follows is an article first published in the Branching Out Fall 2019 newsletter from the University of Maryland Cooperative Extension. It provides a thoughtful analysis of the concerns about glyphosate. The author, Jonathan Kays, discusses Roundup and similarly categorized products relative to their chemistry, use, and how it is viewed by different agencies and organizations. In addition, links to reference material are provided. Please take some time to give it a read.

What’s Going on With Roundup®? 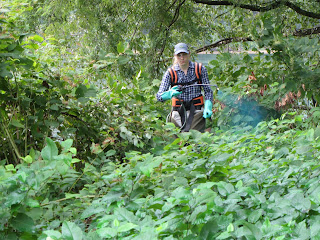 Compiled by Jonathan Kays, University of Maryland Extension Forestry Specialist
(Reprinted from Branching Out newsletter, Fall 2019, with permission from the author)

The news media is full of offers to join class action lawsuits against glyphosate, the active ingredient in many herbicide formulations, including Roundup®. High profile lawsuits in California have successfully sued Monsanto, the original manufacturer of Roundup. The assertion was that their clients’ long-term use of Roundup® caused the plaintiffs' cancer.

I am not a toxicologist, I am an extension forester and a faculty member at a land-grant university who is committed to looking objectively at scientific data and making recommendations. In this case the lawsuits and media do not seem to match with the science.

So why is glyphosate so important? Controlling undesirable vegetation in forestry is critical to assuring a healthy forest, establishing forest regeneration, creating wildlife habitat, and controlling invasive plants. Controlling undesirable vegetation is possible by using prescribed fire, mechanical tools and equipment, and possibly even goats, but herbicides are much more effective and efficient. In fact, mechanical control methods may pose a greater safety threat for human injury.

Glyphosate is a type of herbicide that has an active ingredient that interferes with plant growth. Glyphosate works by blocking the activity of an enzyme in the one of the biochemical processes so that the plant cannot grow. The process is found only in plants and not in humans and other animals. Monsanto marketed glyphosate as Roundup® in 1974 and held the patent on the chemical until 2000. The patent expired in 2000, allowing companies to legally produce and sell glyphosate, and at lower cost, which is where we are today.

Glyphosate is found in many formulations and trade names and is sold in big box stores and through agricultural dealers. It is widely used in forestry, agriculture, and residential markets to control unwanted vegetation. It works on all types of plants, becomes inactive in the soil, breaks down quickly in sunlight, and poses little danger to the environment. Glyphosate, like every chemical active ingredient for any herbicide, goes through an assessment by the Environmental Protection Agency (EPA), which determined it to be safe when used “according to the label directions.” The label is the law.

Some recent court verdicts in California have found glyphosate responsible for causing non-Hodgkin’s lymphoma (NHL). Scientists do not really know what causes this cancer. If glyphosate caused cancer at realistic exposure levels, then farmers and other applicators would be the first to show this effect. The largest study ever published (see references), looking at farmers and other applicators, found no association between glyphosate and solid tumors, including NHL.

Anti-glyphosate advocates point to the 2015 report from the International Agency for Research on Cancer (IARC, www.iarc.fr), an arm of the World Health Organization. The report labeled glyphosate a probable human carcinogen, a determination that was surprising to many. IARC responded to critics by clarifying their intent – to identify potential hazards. They asked, “Can it cause cancer under any circum-stance?” They defer to others to do risk assessment based on expected levels of exposure and background cancer rates. Most governments (US, Europe, Australia, New Zealand, and Canada) have published risk assessments about glyphosate, finding it unlikely to cause cancer in humans when used according to label directions.

Glyphosate use in forest management is critical for controlling undesirable vegetation and using it according to labeled directions minimizes risk. As with any pesticide, risk is reduced by using the Personal Protection Equipment detailed on the product label, such as proper clothing, gloves, eye protection, etc. To do otherwise is using the material illegally. Determinations by courts and lawyers do not necessarily reflect the science on this subject. I encourage you to review the references provided below and make your own decision. If use of glyphosate can be banned based on the science available, the obvious question is, “What’s next?”

Information for this article was drawn from the following sources:

The Cornell Deer Management Study efforts are now complete and published in the peer-reviewed literature. The findings are quite interesting. You can view a Video Abstract on Vimeo. The full research paper entitled, Red oak seedlings as indicators of deer browse pressure: Gauging the outcome of different white‐tailed deer management approaches, is open access and can be viewed here. Provided below are the highlights of their findings. 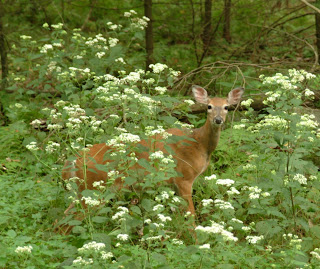 Different deer management zones were established around the Cornell Campus including a deer fertility control area, a recreational hunting area, and a “control” area where no deer management occurred. The researchers individually marked more than 100 deer. This allowed them to use annual camera surveys to assess the population, using mark - recapture models. They also used planted red oak seedlings to assess ecological outcomes. The combination of knowing the herd size while measuring ecological outcomes is unique, no other study has done this in open populations.

Results:
1. Fertility control: despite a 90%+ sterilization rate, it did nothing to reduce the deer population, this was not surprising.
2. Recreational hunting: as presently implemented by agencies and executed by hunters, also did not control the deer population. This may come as a surprise to some, researchers allowed access to all lands available and killed hundreds of deer, still to no avail.
3. Using planted red oak seedling sentinels as indicators of ecological outcomes, the study showed basically no difference in the fate of oak seedlings between the sterilization, recreational hunting, and no management zones, with slight annual variations. Other oak mortality factors, rodents etc., barely registered. Deer herbivory was rapid in late spring and summer.
4. Halfway through the study the researchers switched to the nuisance permits and eliminated recreational hunting in a core area surrounding the campus. Only then were they able to drop the deer population substantially. With the drop in the deer population, deer browse rate declined linearly. This showed how powerful the red oak sentinel method can be as it tracks changes in the deer population. However, immigration of deer from the surrounding areas more than offset deer kills, even with hunting over bait and at night, researchers were unable to get the oak seedling browse rates below 20%, not low enough to allow for successful forest regeneration.
5. The deer nuisance permit approach provided benefits but researchers are not sure it will provide the lasting deer reductions required to deliver the ecological and human health benefits, i.e. highly palatable plants and Lyme disease, needed for a healthier future. Ultimately, we need to fundamentally re-think and revise how we manage deer and landscapes. Those advocating for no deer kills in the animal rights community will likely not care for these results. Researchers also expect that many hunters, who are now accustomed to seeing large numbers of deer, or folks in state wildlife agencies may be surprised. For too long we simply believed that recreational hunting will deliver benefits if access is provided without seeing data showing that these assumptions were in fact true.

Summary:
The complaints by foresters and conservationists about the erosion of biodiversity assets have sounded loud and clear starting with Leopold some 80 years ago. It is time that we take our social and ecological responsibilities seriously and manage deer in ways that allows for a future that includes forest regeneration without fences, a walk in the woods without dousing us, our kids and our pets with tick repellent, and forests and landscapes to teem with the beauty and biodiversity that is still possible.  Denuded forests that also will not allow for thriving deer populations are the worst of all possible outcomes, unfortunately we are well on our way to that. We hope that our work, the current paper, and others that will follow will help chart a way to a better future. Will regulated market hunting and allowing the return of big predators, wolves and mountain lions, be essential to achieving this?