Bat Population in Pennsylvania in Peril

I wanted to share with you an article and an update concerning the bat population in Pennsylvania. Many of you may have heard of White-Nose Syndrome (WNS), I am not sure if many of you realize just how serious this disease is. It has literally decimated the cave dwelling bat population here in Pennsylvania and throughout the northeast and has now been detected as far south as Alabama.

WNS was first documented in New York in the winter of 2006-07 and first appeared in Pennsylvania in 2008.  It began killing cave bats in 2009. WNS refers to a white fungus on the muzzles and wing membranes of affected bats. This fungus is a cold-loving fungus affecting bats while they hibernate. While the fungus has been confirmed to be the causative agent of the disease, the specific mechanism on how it causes mortality is not fully understood. The Pennsylvania Game Commission web site has a lot of additional informaiton, including videos, fact sheets, and a range map. There is also a link to the US Fish and Wildlife Service's WNS site.

A number of bat species are now being considered for listing as either endangered or threatened. It is yet to be seen what that will mean for the forestry/timber harvesting community. We do know one thing for sure, the loss of bats will most certainly cause an increase in the insect population. Bats are insect eating machines, with a single bat having the ability to consume nearly a million insects per year. This is bad news for farmers and foresters as potential loss of crops could become increasing great. Risk of transmission of diseases like West Nile Virus may increase as well.

They serve a critical role in pollinating crops, killing insects, and fertilizing soil, but their presence throughout the state of Pennsylvania is in a disastrously serious decline. According to a new report by PhillyBurbs.com, 99.99 percent of bats living in Pennsylvania's second largest bat habitat were recently discovered to be dead, and a cohort of biologists currently studying the issue estimates that a shocking 98 percent of bats living throughout the entire state of Pennsylvania are now dead as well.

For many generations, tens of thousands of bats have made their home at an old abandoned iron ore mine in the Upper Bucks area of Central Pennsylvania. At least six different bat species resided in the mine, which has long been a key hibernation spot for bats during the cold winter months. But a recent inspection of the mine revealed that a mere handful of the approximately 10,000 bats that were believed to have lived there previously are now gone, and most of the few remaining bats are ill with a disease that will likely kill them.

To read the complete story click here.
Posted by David R. Jackson at 1:34 PM No comments:

Value of Eastern Hemlock on the Landscape

﻿ ﻿ With Hemlock Wooly Adelgid (HWA) moving across Pennsylvania there is a real threat of it impacting hemlock on the high Allegheny plateau.  Recently, a group called the High Allegheny Hemlock Conservation Project has formed to look into hemlock conservation in the region.  The group is headed by The Nature Conservancy but numerous state, federal and private entities are involved.  One of their first tasks has been to develop an in-depth list of various attributes that make hemlock valuable, or what makes certain areas of hemlock valuable.

The following is a list of the valuation aspects the Steering Committee feels are most important when considering the value of hemlock on the landscape:
Wildlife Habitat
Rare Habitats: Including old-growth, rare, threatened, and endangered species
Water Quality
Human “Use”:  Includes recreation, spiritual and aesthetic aspects, and can be used as a proxy for the amount of money gained from tourism, and amount of money that would be spent on removal of hazard trees

Other attributes that may make a stand of hemlock more valuable include:
1. Access to the site - which directly relates to the ability to use treatments on the ground

2. Connectivity of hemlock stands or patches on the landscape

This list is not in any particular order and any feedback would be greatly appreciated.......it’s completeness or incompleteness, or suggestions on what data to use or where to look for data, would be appreciated.

The steering committee is currently gathering spatial data relevant to each of these aspects.  The attributes will be able to be viewed and used to prioritize stands where treatmenst can then be applied.

Lastly, I have provided a link to a bookhlet entitled Silvicultural Options for Managing Hemlock Forests Threatened by Hemlock Wooly Adelgid.  The booklet was written by David Orwig, Harvard forest, and David Kittredge, UMass Extension.  It was developed for landowners to learn about HWA and their options concerning management of hemlock.  With HWA so near the High Allegheny Plateau it is imperative to get the word out to as many as possible, so people can be looking for the insect and reporting what they are seeing.

For more information you can contact Sara Johnson (sejohnson@tnc.org) at The Nature Conservancy directly.
Posted by David R. Jackson at 10:39 AM No comments: 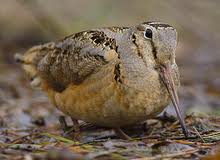 As a folIow-up to last weeks post on young forests, deer, and clearcutting, I wanted to let you know about a number of resources related to young forest habitat communications that a team of professionals across the Northeast have been put together. They should be beneficial resources to help explain to different audiences the importance of this habitat to wildlife.

The Wildlife Management Institute has created a number of excellent websites: www.youngforest.org, www.timberdoodle.org, and www.newenglandcottontail.org.

The websites were designed and written to educate and appeal to the public and to provide ready-made text for conservation professionals when developing letters, articles, reports, and proposals. The text can be used verbatim or adapted to your needs. Be sure to share this informaion with landowners, other colleagues, and anyone interested in learning more about young forests.

When you click on "Resources" in the menu bar (top left), you'll find a substantial (and growing) list of articles, handbooks, brochures, PowerPoints, youtube clips, and websites. Take a look around; you can use the "Choose a Resource Type" filter to zero in on resources for landowners and the public, and those for conservation professionals.

Here is their latest resource for professionals:
Talking About Young Forests: A Communication Handbook
(A guidebook helping conservationists explain the importance of young forest to the public and other key audiences -- 3 MB.)