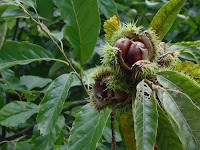 September 24 – The Charlotte Observer reports that 500 blight-resistant American chestnut saplings are thriving a year after they were planted in three national forests—a milestone in the long-term effort to re-establish the tree in its native habitat.

In stands of tiny trees in North Carolina, Tennessee and Virginia bloom the hope of restoring a mighty giant, as scientists try to bring back the American chestnut from near extinction.  "Just developing a blight-resistant tree is not enough," said Bryan Burhans, who heads the American Chestnut Foundation in Asheville. The trees have to be planted in the forest to see if they can survive real-world conditions and competition with other plants.

To read the full sory go to: http://www.charlotteobserver.com/597/story/965860.html?storylink=omni_popular

Story edited from the Society of American Foresters E-Forester - September 25th edition.
Posted by David R. Jackson at 10:18 AM