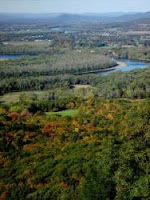 The following news release appeared in the May 21, 2010 Society of American Forester's E-Forester News.  The article highlights a report authored by 20 scholars in forest science and was produced by the Harvard Forest of Harvard University.  The report highlights a common trend across most states; the permanent loss of forest land.  Even though this report focuses on the New England states, the same can be said for Pennsylvania and many other states as well.  Read on......

CAMBRIDGE, Mass. -- New England forests are at a turning point. A new study released today by the Harvard Forest reports that, following almost 200 years of natural reforestation, forest cover is declining in all six New England states. The authors of the Wildlands and Woodlands report call for conserving 70 percent of New England as forestland, a target that they say is critical to protecting vital natural benefits that would be costly, and in some cases impossible, to replace.

"We've been given a second chance to determine the future of the region's forests. This report calls attention to the pressing need to couple New England's existing conservation capacity and shared land ethic with a vision for the next century in which forests remain an integral part of our livelihoods," said David Foster, lead author of the report and director of the Harvard Forest. Foster points to clean water, climate protection, and renewable wood supply as examples of the forest's many benefits to society.

The report, "Wildlands and Woodlands: A Vision for the New England Landscape," was produced by the Harvard Forest of Harvard University, and authored by 20 scholars in forest science, policy, and finance from across New England. It examines forest trends and promotes strategies for permanently retaining 70 percent of the New England landscape in forest over the next 50 years.  The vision would triple the amount of conserved land in New England while still leaving ample room for future development.