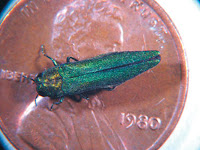 It apears as though the emerald ash borer (EAB) is rearing its ugly head in central PA again.  I am afraid it is here to stay and may have a significant impact on the ash resource.  Yesterday, July 1, 2010, the Pennsylvania Department of Agriculture confirmed the presence of EAB in three new counties, Centre, Fulton and Somerset counties.  They are also awaiting confirmation from an area detected in Union county as well.  To protect PA's hardwood industry, the secretary of agriculture is urging the public to heed existing qauarantines and not move firewood.  Pennsylvania is the largest producer of hardwood lumber in the nation.  To read the full news release go to the Pennsylvania Department of Agriculture's web site.

On June 25, 2010 Penn State Natural Resources Extension sent out a news release concerning EAB.  More specifically, describing the monitoring system in counties that are not yet impacted by the insect.  The use of what are know as purple panel traps is described.  These traps can be seen hanging in trees throughout the area.  To read this article go to Penn State Extension's Forest Stewardship News web site.

Lastly, Cornell Cooperative Extension will be hosting a live webinar on Wednesday, July 21, 2010 highlighting the work that Dr. John Vandenberg and Leah Bauer are doing to find biological control agents for this insect pest.  We are already implementing cultural and insecticidal controls but biological controls may be the best answer.  The webinars are hosted live at noon and again at 7:00 PM and generally last about an hour.  Anyone who has not previously registered [you only need to register once] can complete the registration via the WEBINARS link at http://www.forestconnect.info/.
Posted by David R. Jackson at 8:43 AM