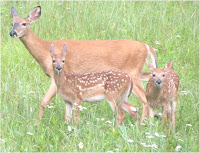 Do you want your deer management decisions made by politicians or trained professional biologists? Legislation before House Committees would fundamentally remove the biological decision making ability of the Pennsylvania Game Commission to effectively manage deer populations for the good of all.

The legislation proposes to form an “Antlerless Deer Harvest Committee” (H.B. 2034, sponsored by Rep. Michael Hanna, (D.) 76th district) and/or provide for a regulatory review commission with the power to repeal PGC and PFBC decisions.

The following article was written by Vic Attardo, a writer for The Mercury, serving Pottstown, Pennsylvania and the Tri-County area.  This is a must read.  Let me know what you think?

1/28/2012
Last year the Pennsylvania legislature — House and Senate — failed to pass any measure on Marcellus shale drilling. They also failed to pass legislation on the privatization of the state liquor control system. Last year was also just another year with no property tax reform or any meaningful mitigation for overburden taxpayers. Year after year, this same legislature either goes into overtime or accepts the state budget by the skin of the timetable’s teeth -- often forcing layoffs and cutbacks in state employment.

So I ask, are the few sportsmen pushing for this agency assault out of their minds?
Posted by David R. Jackson at 5:28 PM

Sounds good, both hunters and non-hunters agree the Pa deer population is too low. White Tails are a part of Pennsylvania and need to be managed responsibly.