Is Habitat Quality a Reason for Fewer Deer in Pennsylvania? 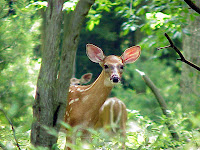 An article published in Outdoor Life caught my attention. The article was entitled Public Land Deer Hunting: How to Save America's Deer Woods by Frank Miniter. If you haven't seen it, I suggest you give it a read. The article highlights a deer hunters experience in NY's Catskill Mountains. Having worked in the Catskills I was interested in what the writer had to say. I also wondered if it might relate to public lands found in Pennsylvania. The writer is concerned about declining deer and wildlife populations in general caused by aging habitat and maturing forests. Miniter states, "These are big woods, and getting bigger. These days, both the game and the hunters are mostly gone."

Here is a quote from the article which sums it up, "Most agencies, however, have a hard time finding the funding and authority to make sure there is enough early successional habitat (what hunters often refer to as “cover”). Examples of this include overgrown pastures, thickets, and saplings. If these habitats are not mowed, burned, cut, or disturbed in some fashion, they eventually become forest. If a forest is never thinned, flooded, impacted by insects, or burned, it grows into a mature canopy that prevents sunlight from reaching the forest floor. When this happens a lot of wildlife and plant species disappear."

What the author is referring to is the process known as succession. Succession is the natural progression from one predominant vegetation type to another over time in the absence of disturbance. Understanding succession is important when managing habitat for wildlife. Some wildlife species are adapted to a specific successional stage of growth, such as grasslands or mature forest. Land managers can manipulate habitat to maintain the stage of forest succession necessary to support sufficient numbers of a particular wildlife species. White-tailed deer are adapted to a broad range of successional stages but do best in early successional habitat. One of the top threats to white-tailed deer populations is maturing forests. Mature forests do not provide sufficient food and cover to support large numbers of deer. In contrast, young forests or old fields transitioning to forest provide optimal deer habitat.

﻿﻿
In forested areas habitat quality for deer is dictated not only by the species of trees present but also by ﻿the range of age classes found. A wide range of age classes is important as it provides a diversity of habitat types. Young forests are necessary to provide browse ie. leaves, twigs, and buds for deer to feed on. A mature deer needs between 4 and 10 pounds of browse daily. A mature forest produces on average 50-100 pounds of browse per acre while a young forest can produce 1,000-2,000 pounds of browse per acre. Based on this alone, it is clear that young forest habitats can sustain many more deer than mature forests. Mature forests are important for providing mast (acorns and nuts). But, mast crops vary from year to year, with some years being in great abundance and others completely absent. The fact is deer need a variety of habitat types and a diversity of age classes to provide their day to day needs.

In doing a bit more research I found the issue concerning the loss of early successional habitat is not isolated to New York state but is also an issue in Pennsylvania as well as many other eastern states. The 2009 Whitetail Report (pages 33-36) prepared by the Quality Deer Management Association (QDMA) provides an excellent overview of the issue in the Quality Deer Habitat section of the report. QDMA authors indicate that extended deer seasons and increased antlerless licenses are often to blame as the sole reason for hunters seeing fewer deer in some areas. However, they are quick to point out, providing proper habitat is essential for maintaining any wildlife population be it deer or any other species. The authors indicate that balancing deer herds with habitat is best accomplished through a two-pronged approach consisting of harvesting the appropriate number of does while simultaneously improving habitat.

In 2006 the USDA Forest Service Inventory and Analysis data indicated that Pennsylvania had 1,795,527 acres of young forest habitat, down more than 700,000 acres from the 1989 inventory. Some of this habitat was lost to development but much of it simply grew up into a larger size class of trees, called the pole stage. This represents a significant loss of young forest habitat since young forests in Pennsylvania's make up only 11% of the total. If the loss of young forests continues our habitat will support not only fewer deer but also fewer upland game birds, numerous songbirds, and many other wildlife species dependent on this habitat type.

Many hunters have enjoyed high deer densities in the past. Often times these high numbers were directly associated with large amounts of young forest and early successional habitat. As the number of acres of young forests is reduced and forests mature, the number of deer and other wildlife species dependent upon this habitat type is also reduced. Expanded seasons and increased allocations are often to blame for decreased deer sightings but don't discount the importance of habitat. The loss of early successional habitat and young forests may just be the overriding factor as to why there are fewer whitetails in the deer woods.

Very good article. Unfortunately in Pennsylvania, the public lands forests (game lands and state forests) are managed on a rotation that they deem most profitable and little else. As for timbering more for habitat improvement purposes, they have the means to do it... Just not the desire apparently.

It is the major factor in SOME PARTS of Pennsylvania. In many others it is simpy a bazillion doe tags, dmap, coyotes...etc.

MAIN issue I see is pgc mismanagement. Not all areas of Pas habitats are ecological wastelands, yet still have fewer deer than could be and should be the case.