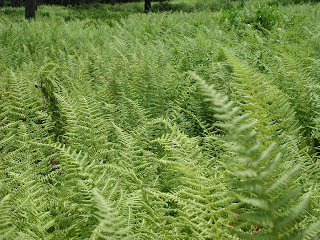 Hay-scented, New York, and bracken fern are referred to as “interfering plants” since they inhibit the establishment and growth of desirable tree species. A series of comprehensive field, greenhouse, and laboratory experiments evaluating how ferns interfered with tree seedling regeneration concluded the quantity and quality of light to the forest floor was the most limiting factor. Dense fern groundcover can reduce the number of desirable seedlings by 50-90 percent and inhibit seedling height growth by 40 to 65 percent.

U.S. Forest Service researchers began looking at herbicides to control fern in the mid-1970s and found herbicides to be an effective, practical, economical, and safe means of controlling fern understories. Researchers looked at fire and found it stimulated the spread of fern and mechanical weeding was nearly impossible. This work led to the prescriptions commercial applicators use today for fern control.

Sustaining hardwood forest species diversity and timber value requires recognizing when interfering plants, such as fern, are or will become a problem. When fern covers 30 percent or more of an area it is likely to dominate the understory following a harvest or other disturbance. It’s important to recognize and treat fern problems prior to performing timber harvests. Not every site that contains an undesirable fern understory is a candidate for herbicide treatment. Whether your goal is to increase plant and wildlife diversity or regeneration success it’s important to consult with a professional forester who can help you recognize and treat fern problems.

This fact sheet is available online at the link below or in hard copy by contacting the Penn State Extension Ag Publications Distribution Center at:
Phone: 814-865-6713 or E-mail: AgPubsDist@psu.edu
http://extension.psu.edu/natural-resources/forests/private/tools-resources/publications/forest-stewardship/controlling-understory-fern-competition-for-regeneration-success/extension_publication_file
Posted by David R. Jackson at 1:15 PM