I seem to be seeing a lot of deer hit along the roadways these days. Is that evidence that our deer numbers are up? In a recent article, released by State Farm Insurance Company, Pennsylvania moved up to third place in the nation when comparing all states in the likelihood of having a deer vehicle collision. The numbers also included collisions with elk and moose as well. West Virginia and Montana were the only states ahead of Pennsylvania. The numbers were generated from claims data and state licensed driver counts from the Federal Highway Administration.

This time of year has been shown to have the highest incidence. This is because of two reasons, first, deer are active at dawn and dusk which, as the days shorten, happens to occur when most drivers are on the road during rush hour. Second, deer also become more active this time or year with the occurrence of the breeding season.


I have provided the full article below.

In many U.S. states, drivers are all too familiar with deer crossing signs, but do they really know how close the danger may be? State Farm has released its annual deer claim study, which ranks states by the potential drivers had of hitting a large animal, including deer, elk and moose over a given time period. On average, one of every 41 West Virginia drivers will have an insurance claim for damage caused by a collision with a deer in 2016.

The top five states a driver was most likely to have a claim from a collision with a deer, elk or moose in the 2015-2016 study are: 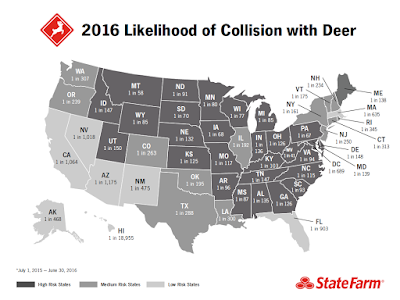 Pennsylvania and Iowa have switched positions on the top ten list of states where drivers were more likely to collide with a deer, while Wyoming moved into the top ten at number eight. South Carolina is no longer in the top ten and thirteen states had no change in ranking.

The likelihood of colliding with a large animal more than doubles during the months of October, November, and December; during deer mating season. Whether you hit a large animal or it jumps into the side of your vehicle, such collisions can cause significant injuries and property damage. No matter where you live, it’s important to keep your eyes up and focus on the road, helping you take action in the event a large animal is suddenly in your path.

Some other tips to help keep drivers safe include:
•Slow down, particularly at dusk and dawn
•If you see one deer, be prepared for more deer to cross the road
•Pay attention to deer crossing signs
•Always buckle up, every trip, every time
•Use your high beams to see farther, except when there is oncoming traffic
•Brake if you can, but avoid swerving, which could result in a more severe crash
•Remain focused on the road, scanning for hazards, including animals
•Avoid distractions, like devices or eating, which might cause you to miss seeing an animal
•Do not rely on products such as deer whistles, which are not proven effective
•If riding a motorcycle, always wear protective gear and keep focus on the road ahead

“We know there is an increased risk of collision with deer around dawn and dusk, and also during the October-December breeding season,” said Chris Mullen, Director of Technology Research at State Farm. “However, drivers should be engaged, alert and on the lookout at all times, because you never know when you may need to react to a deer or any other obstacle that may suddenly be in your path.”

Methodology:
Using its claims data and state licensed driver counts from the Federal Highway Administration, State Farm, the nation’s leading auto insurer, calculates the chances of any single American motorist striking a deer, elk or moose during the time frame of July 1, 2015 to June 30, 2016 in all 50 states and the District of Columbia. The data has been projected for the insurance industry as a whole, based on the State Farm personal vehicle market penetration within each state. The State Farm data is based on comprehensive and collision claims only. Claims involving policyholders with liability insurance coverage only are not included.