The Science Behind Turkey Day


Below you will find an appropriate article for Thanksgiving.  I thought I would share the "Penn State" science and technology that goes into raising that turkey you will be enjoying for dinner on Thursday.  Have a great holiday and a successful deer season to follow!

The science and technology behind the Thanksgiving turkey
Julie Eble
November 15, 2016
.. .. 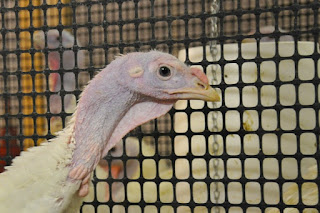 UNIVERSITY PARK, Pa. — Thanksgiving is just around the corner, and for many families, that means a turkey dinner with all the trimmings.

But for Mike Hulet, associate professor of animal science, and others in Penn State's Poultry Education and Research Center (PERC), it's also the culmination of the science and technology that go into raising a better turkey.

Surrounded by a border of locust and Austrian pine trees, the PERC consists of six separate buildings that house turkeys and other poultry for education and research. The vegetative barrier is used to help filter any possible odor, dust, feathers and noise emitted from the poultry operations, and each house is fully computerized and environmentally controlled.

"We can maintain temperatures within a degree or two from the front to the back of the houses," Hulet said, noting that the PERC manager can monitor temperature changes through applications on his tablet or smartphone and make adjustments remotely when necessary. Even on Penn State's hottest summer or coldest winter days, the combination of computer-controlled, evaporative cooling (misting of air into the building) and perpetual air exchange keeps the temperature in the turkey houses within the optimum range: between 68 and 70 degrees Fahrenheit.

Because the U.S. has developed birds that are very large — male turkeys can grow up to 70 pounds and females can grow up to 25 pounds — they can't efficiently mate naturally, according to Hulet. As a result, researchers at the PERC use sophisticated artificial insemination technologies to improve the turkey fertilization process and incubation environment that can enable year-round chick laying.

Once the turkey hens are inseminated, their eggs are placed in one of the PERC's four incubators, which can hold about 1,000 eggs each. While chicken hens are egg-laying dynamos, dropping one egg almost every day, a turkey hen produces only about four per week.

Systems for automatic measurement of carbon dioxide, weight loss from eggs and exact regulation of temperature are used in the PERC's incubation process. These data are used to control the necessary heating, cooling, humidification and ventilation of the incubation machines to maximize the environment for the development of the embryo.

"We try to mimic what old mother hen would do naturally and keep the shell temperature within the incubator at 100 degrees Fahrenheit," said Hulet.

Performing much like a brooding or sitting hen, the eggs in the incubator are turned automatically each hour to ensure that the embryo doesn't get stuck to the shell membrane, gases move around and the temperature is evenly distributed. Alarm systems on the incubators also alert for any problem in the machines and all necessary information is provided on a digital display. Everything is connected to the manager's office so it can be monitored and controlled through a central computer system.

To help enhance the welfare of the turkeys and provide uniform growth, the lighting in the turkey houses is also automated through a computer system with an optimized color spectrum and dimming capability.

"Lighting has been shown to be a key input in healthy poult (baby turkey) development," said Hulet.

As a result, the lights in the turkey houses at the PERC are initially set at a higher intensity when the birds are first placed in the pens so they can find where the water and feed are located. The light is later decreased as the turkeys get accustomed to their surroundings. Hulet says this low-light spectrum output helps to calm the turkeys and reduce injury.

For many families, having turkey at Thanksgiving is a tradition that has been part of the American culture for a long time.

In 2011, there were 248.5 million turkeys raised in the U.S., including 7.5 million in Pennsylvania, which made the Keystone State ninth out of the top 10 turkey-producing states, according to the National Turkey Federation.

"If you're feeding a large group of people, a nice 22-pound turkey is the one product you're able to share with everyone," said Hulet.

In the 1970s, only about half of turkey sales for the year were made during the Thanksgiving holiday. But throughout the last 35 years, the turkey industry has gone from mainly marketing a single-product consumed at holidays or special occasions, to offering a diverse array of food choices ranging from sausages and burgers to deli meats and more, according to the federation. In 2015, U.S. consumption of turkey was 16.1 pounds per person. Increasingly, consumers are including turkey in their daily diets because of its health benefits, versatility and taste.

Regardless of all the technology that goes into raising turkeys these days, Hulet says he is looking forward to spending the Thanksgiving holiday with his adult children.

"They'll be cooking the turkey this year, but I always carve it to make sure I get my favorite part of the bird — the dark meat of the legs and thighs — because it has more flavor and tends to be moister as opposed to the white breast meat," said Hulet. "There's nothing better than a turkey sandwich with cranberry sauce the day after Thanksgiving."
Posted by David R. Jackson at 2:49 PM