Threatened by a Thousand Cuts


Forests cover over half of Pennsylvania, totaling 16.6 million acres. More than 70 percent of forested land is privately owned. With about 58 percent of its 28.6 million acres covered in forest, Pennsylvania still honors its namesake, "Penn's Woods," as one of the more heavily-wooded states in the country. Forest cover was as high as 90 percent before European settlement in the 17th century, and as low as 32 percent in 1907.

It's often assumed that most Pennsylvania's forestland is owned and protected by the state, the federal government, or nonprofit conservancies. But, nearly three-quarters of it is privately owned. Penn State's Center for Private Forests puts the current number of "woodland owners" at a startlingly high 740,000 — more than eight times as many as in New Jersey. Their average age is high, too: 57.

A number of threats influence those vast privately held acres, totaling 11.5 million to 12.5 million acres. Invasive plants and insects, deer over-browsing, improper harvesting practices and others all have their impact on the forest. However, parcelization, taking large tracts of land and dividing them into smaller and smaller parcels, is one of the most significant threats to forests functioning properly. One report estimates that 300 to 600 acres of forest and farmland are lost each day in Pennsylvania, particularly in urban and suburban areas.

Threatened by a Thousand Cuts 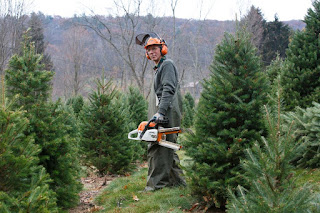 Many trees in Gary Hague's Wyoming County forest sprouted before he was born. Others were planted with his own rough hands. A memory seeded in the summer twilight a half-century ago grows there, too.

The deed says 99 acres "more or less," but it felt even bigger when Hague was 14 and his Uncle George said they needed to walk it. They left the clapboard farmhouse at dusk, mostly silent aside from waking insects, and followed the boundary lines in the long shadows.

When George Hague died in 1973, an attorney told his nephew the land was his. "I think he drew up his will that night after our walk," Gary Hague, 65, said from his kitchen table in the rancher that replaced the farmhouse. "I think he was trying to show me what stewardship was, that this is family, part of who we are."

He looked out the window at his inheritance. "Sorry if I get a little emotional about it," he said. "When I was younger, I didn't get emotional, but the older I get, the more I feel."

To read the rest of the story and view the interview videos click here.
Posted by David R. Jackson at 1:45 PM