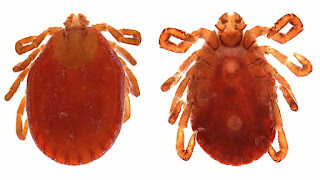 For those of us that spend any time in the woods this is not good news, as if it weren’t bad enough with Lyme disease and deer ticks. The PA Game Commission just announced they discovered a new exotic introduced tick species, the Asian longhorned tick. Check out the fact sheet from Penn State Extension. I also included a follow-up from the Centre Daily Times.

A single longhorned tick (Haemaphysalis longicornis) was identified on an adult, male wild white-tailed deer that was euthanized on July 10 by Game Commission personnel because it was exhibiting signs consistent with chronic wasting disease (CWD), according to Dr. Justin Brown, agency wildlife veterinarian. The deer was diagnosed with severe pneumonia and no CWD prions were detected.

Ticks were collected from the deer at the laboratory as part of the Game Commission’s active longhorn tick surveillance program. The suspected longhorn tick was sent to and first identified by the Southeastern Cooperative Wildlife Disease Study in Athens, Ga., and subsequently confirmed at the NVSL.

The longhorned tick, also known as the “cattle tick” or “bush tick”, is an invasive parasite native to Southeast Asia. It currently is not known when, where or how this tick was introduced into North America. However, it was first found and identified on a sheep in New Jersey during 2017. Since then, it has been identified in wild and domestic animals in other states, including Virginia, West Virginia, New York, Arkansas and North Carolina.

The longhorned tick, during its three life stages can be found on birds, wild and domestic mammals and humans. To date, the tick has been identified on goats, raccoons, horses, cattle, sheep, humans, an opossum, deer and dogs. The longhorned tick can negatively impact the health of humans and animals both directly and indirectly. Longhorned tick infestations can reach very high numbers on an animal host, which can result in disease and, in some cases, death.

The longhorned tick, in its native range, can carry many pathogens that may cause diseases such as babesiosis, anaplasmosis, theleriosis, ehrlichiosis and Powassan encephalitis in animals or humans. To date, none of these pathogens have been identified in longhorned ticks from North America. However, testing has been limited.

“The preventive measures currently used for our native ticks are the best way to protect yourself and animals from the longhorned tick,” Brown said. “They include frequent tick checks, prompt and proper removal of any attached ticks, avoiding or removing the high grasses or brush where ticks concentrate, and tick treatments.” Concerns regarding ticks on humans or domestic animals should be addressed through consultation with a physician or veterinarian.

The recent identification of the longhorned tick in multiple states throughout the eastern U.S. suggests that it is likely established. Many questions remain about the ecology of this tick and the impacts it will have on the health of humans and animals.

State health and agriculture officials are urging the public to be vigilant in checking humans and animals for ticks after a new invasive species was found in Centre County. The species, initially found by the Game Commission on a male white-tailed deer in Potter Township, was submitted for testing and positively identified as an Asian, or longhorn, tick, the state announced Tuesday.

“The discovery of the longhorn tick is another reminder of the importance of tick prevention for Pennsylvanians,” Secretary of Health Dr. Rachel Levine said in a release. “Ticks can be found in your own backyard, so it is essential to wear long sleeves and pants, use insect repellant containing DEET to help keep you safe from ticks and the diseases they carry. It is also important to check yourself and your pets for ticks, as pets can bring ticks indoors. It has likely traveled quite far in the U.S. and probably has more of a presence in the country than we think, but we’re just now finding it,” she said.

Because the tick, identified in Virginia, West Virginia, New York and Arkansas, survived the New Jersey winter, it is officially established as an invasive species. In its native range, Machtinger said the longhorn tick is known to carry a wealth of different pathogens that have affected livestock. However, how it will interact with pathogens native to the U.S. is yet to be seen. So far, no longhorn ticks examined in the U.S. have been found to carry infectious pathogens, according to the state.

The species is known to infest host animals — such as cattle, pets, small mammals, birds and humans — in clusters and can cause anemia in livestock. All longhorn ticks are female and reproduce asexually, meaning a single tick can reproduce and lay 2,000 eggs after feeding on a host, according to the Department of Agriculture.

The best way to prevent the tick’s spread, according to Machtinger and state veterinarian Dr. David Wolfgang, is through regularly checking pets and livestock, and reducing the tick’s habitat near animals. “Take careful look at your animals,” Machtinger said. “If you have cattle, sheep, goats, make sure you’re putting your hands on them and looking for insect infestation. And look for ways you might be able to protect your property by either modifying your fencing or pastures away from forest habitats to try to prevent infestation before it happens.” Wolfgang also recommended maintaining a 9-foot distance between lawn or pasture and wooded areas, keeping grass height low and removing weeds and brush from bordering wooded areas.

As its “horns” may not be visible without a microscope and it’s otherwise pretty nondescript, the longhorn tick is often mistaken for other tick species, including the common rabbit and bird ticks. “This particular tick is a bit rounder than your black-legged tick and it has uniformed coloration across its entire body, whereas some of our other ticks have what we call ornamentation,” Machtinger said. “This tick is all one color, sort of a reddish-brown, and even difficult for people who study ticks to immediately be able to tell the difference, especially if it’s on an animal and engorged, or a small or younger-life-stage juvenile.”

Machtinger said the best thing for someone who thinks they’ve identified a longhorn tick to do is send the specimen off for identification. Veterinarians can send a sample to the Penn Vet Diagnostics Laboratories at 3900 Delancey St. in Philadelphia, and other Pennsylvania residents can send specimens to Penn State’s Insect Identification Lab at 501 Agricultural Science and Industries Building, University Park.
Posted by David R. Jackson at 4:30 PM