A Geneticist's Take on Tackling the Emerald Ash Borer

The emerald ash borer is the most damaging invasive forest insect pest in North America, having killed hundreds of millions of ash trees across the U.S. since it was introduced. Finding and breeding emerald ash borer-resistant trees may be a key strategy in combatting this pest. U.S. Forest Service research on this was recently featured in an article in Science Magazine.

Can an ambitious breeding effort save North America’s ash trees? 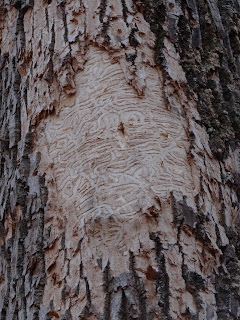 DELAWARE, OHIO—On a weekday morning in August, just one pickup truck sat in the sprawling visitors’ parking lot here at the U.S. Department of Agriculture’s (USDA’s) Forestry Sciences Laboratory. A decades long decline in research funding had been slowly quieting the place—and then came the pandemic.

But in a narrow strip of grass behind a homely, 1960s-era building, forest geneticist Jennifer Koch was overseeing a hive of activity. A team of seven technicians, researchers, and students—each masked and under their own blue pop-up tent—were systematically dissecting 3-meter-tall ash trees in a strange sort of arboreal disassembly line. Over 5 weeks, the researchers would take apart some 400 saplings, peeling wood back layer by layer in search of the maggot-like larvae of the emerald ash borer (Agrilus planipennis), the most devastating insect ever to strike a North American tree. Since the Asian beetle was first discovered in Michigan in 2002, it has killed hundreds of millions of ash trees across half the continent and caused tens of billions of dollars of damage.

“We have contests for who can successfully pull out the smallest larvae and the biggest larvae,” Koch says. “People get pretty excited and competitive about it. You have to do something, because it is very tedious—and [the larvae] are really gross.”

The larvae kill ash trees by burrowing into them to feed on bark and, fatally, the thin, pipelike tissues that transport water and nutrients. They then transform into iridescent green beetles about the size of a grain of rice that fly off to attack other trees. Dead larvae excite Koch and her team the most. Those finds signal trees that, through genetic luck, can kill emerald ash borers, rather than the other way around. Such rare resistant trees could ultimately help Koch achieve her ambitious goal: using time-tested plant-breeding techniques to create ash varieties that can fend off the borer and reclaim their historic place in North American forests.