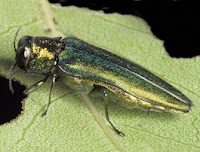 Emeral ash borer (EAB) adults are on the wing in Pennsylvania!  Adults were observed on the wing next to a large, infested ash tree by Dr. Greg Hoover, Penn State University Extension Entomologist, while doing a program on EAB for a local TV station this past week.  He was at an EAB site located in northeastern Union County in Central Pennsylvania.

The EAB peak flight period in Pennsylvania is June through mid-July.  So, while in your travels be on the lookout for adults, especially on the sunny side of ash trees.  Additionally, look for any marginal notching on the ash leaflets, especially on leaflets associated with epicormic shoots around the base of infested tree.

Dr. Hoover has compiled a number of fact sheets with high quality images on his Emerald Ash Borer Web Site.  There are fact sheets on Identification and Damage, Ash Tree Identification, Borer Look-Alikes and others.

On another note....biological control measures are moving forward.  Scientists in Wisconsin made their first release of tiny wasps (Tetrastichus planipennisi) collected from China this past week.  The wasps have show promise at killing the borer.  Now the research will attempt to find out if the tiny wasp will control ash borer populations.

In Battle Against Ash Borer, Wasps May Be the Saviors (The Northwestern.com, June 7, 2011)
MADISON — A battle of insects is coming to Wisconsin as scientists look for ways to save the state's ash trees.

On one side is the emerald ash borer, an invasive insect that has killed millions of ash trees and, scientists say, threatens billions more. On the other are tiny species of wasps that, in China, have shown they will kill the borer. Scientists are now starting to release the wasps in an experimental effort aimed at controlling the borer.