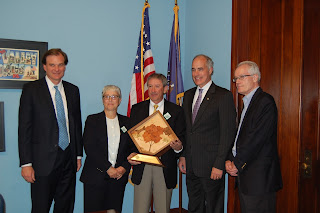 Raul and Janet were presented this high achievement by Pennsylvania Senator Robert Casey, Under Secretary for Natural Resources and Environment at the U.S. Department of Agriculture, Robert Bonnie and Tom Martin, President and CEO of the American Forest Foundation (AFF), the organization that runs ATFS.

“I want to extend my congratulations to Janet Sredy and Raul Chiesa for being chosen as the National Outstanding Tree Farmers of the Year. Janet and Raul’s work in transforming Beckets Run Woodlands shows that we all must take part in conserving and protecting our forests,” Senator Casey said. “Forestry is close to the heart of many people across our region, serving as a major part of our heritage and our economy. As a member of the Senate Committee on Agriculture, Nutrition and Forestry, I have and will continue to support any efforts in protecting National Forests, especially in Pennsylvania. But the work Janet and Raul do, has a lasting effect on how we ensure the continued stewardship of Pennsylvania’s woodlands. Thank you both for your continued work.”

“Family forest owners like Raul and Janet are some of the unsung heroes of our forests,” said Under Secretary Robert Bonnie. ”Many don’t realize that family forest owners are the largest ownership group of forests in the U.S. What’s more, the work they do on their land, is felt far beyond their properties – for wildlife habitat, clean water, recreation and more.”

Chiesa and Sredy, who took ownership of Beckets Run Woodlands, within the State designated Beckets Run Biodiversity Area, in 2007, found themselves managers of a severely damaged property due to poor agriculture practices, air pollution, vandalism and fractured ownership. Wildlife in the area struggled to move through the underbrush and lacked the needed food because of invasive species and disease. Chiesa and Sredy immediately created a management plan and set on a path to restore the native ecosystem, improving the health of their trees, eradicating invasives and planting species that provided food for wildlife. Not long after, they were certified in the American Tree Farm System and enrolled in the U.S. Forest Service Forest Stewardship Program with the support of Pennsylvania’s Department of Conservation and Natural Resources, Bureau of Forestry.

In a state known for deer hunting, Chiesa and Sredy saw an opportunity to provide for the wildlife, while also providing for the community. They established a wildlife management partnership with neighboring landowners and the Pennsylvania Game Commission to improve wildlife and game, and provide recreational hunting to more than 100 hunters. Chiesa and Sredy have also formed an educational partnership with neighbors, the local university and Pennsylvania’s Department of Conservation and Natural Resources to protect and study rare Pennsylvania plant species.

“Our Tree Farmers are significantly contributing beyond their own property boundaries, and they are doing it in fresh, creative ways,” said Tom Martin of AFF. “Recognizing and honoring individuals like Janet and Raul is the least we can do to thank them.”

ATFS, which celebrates its 75th anniversary next year, began the time-honored tradition of recognizing a National Outstanding Tree Farmer from the more than 82,000 Tree Farmers in the 1970s. Individuals considered for the award must demonstrate exceptional efforts to preserve and enhance their woodlands, which includes conserving and enhancing clean water and air, wildlife habitat, recreational activities, and the wood for homes and paper products that come from their land, all of which are exemplified on the ATFS sign.