Early Successional Habitat for Deer and Other Wildlife Species 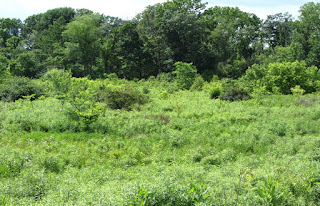 Early successional habitat, also called young forests, is declining.  During the last half century the number of acres in the east and upper mid-west has dwindled.  Many acres have been lost to development.  Also, as brushy areas mature to become middle-aged and older forests, they cease being useful to numerous species that need young woods.

The American woodcock, or timberdoodle, is considered the umbrella species for young forests.  Woodcock represent all of the animals that use young forests during part or all of their life cycle.  By creating habitat for woodcock we can halt and reverse the decline in their numbers while helping more than 50 other kinds of wildlife.  To create habitat we must restore, create, and maintain young forests by cutting trees in a sustainable manner or abandoning agricultural activities on non-productive lands.

Because young forests mature quite rapidly, within 10-15 years, management activities need to be frequent and ongoing.  Abandoned agricultural fields can be maintained in an early successional stage of growth by periodically disking them on a 3-5 year rotation.  Mowing is discouraged as it promotes grasses.  Young forested areas can be re-cut periodically or new areas harvested as others mature.

To learn about the kinds of wildlife that use young forests and more specifically how to create and maintain it visit the Young Forest Project web site.  To learn more view the “Young Forest Informational Video.”

What about deer and early successional habitat?  Do they benefit from this type of habitat?
Yes, they absolutely do.  Young forests and old overgrown fields provide invaluable habitat for deer, providing both food and cover.  Kip Adams from the Quality Deer Management Association recently released a short video describing the benefits of early successional habitat to deer.  I have provided a link to his video and story below.

Better Hunting with Early Successional Cover
By Kip Adams
September 3, 2015
Want more deer to spend time on your hunting area while also moving more in daylight hours? In this video, I share one of the best-kept secrets for making this happen: early successional cover! We talk a lot about timber management, and food plots certainly get lots of press, but providing early successional cover like I show in this video can greatly increase available forage. Because deer feel "safe" in this heavy cover, they also move more during daylight and use a greater percentage of your hunting area. This cover type can even help hide fawns from predators. Watch now to learn more!
Video: Better Deer, Better Hunting with Early Successional Cover