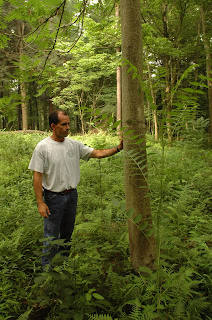 Background:
It was imported into the Philadelphia area around 1784. Immigrants introduced tree-of-heaven into California in the 1850s. It was initially valued as an urban street tree and was widely planted in the United States particularly around the Baltimore and Washington D.C. area. From these areas tree-of-heaven has spread and become a serious weed in urban, agricultural, and forested areas. 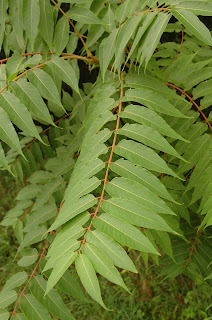 Description:
Tree-of-heaven can reach heights of 80 feet and grow to 3 feet in diameter. The tree has smooth grey bark, stout, blunt, chestnut brown twigs, and a long compound leaf ranging in length from 1-4 feet with as many as 30 leaflets. The leaflets are smooth-edged except for 1-3 teeth near the base. Clusters of twisted papery seeds, called samaras, often hang on the trees over winter. The wood is soft, weak, coarse grained, and creamy white to light brown in color. All parts of the tree, especially the flowers, have a strong, offensive odor. Tree-of-heaven is often found growing in clusters around a “parent” tree as new sprouts grow from the roots.

Look-A-Likes:
This species is often confused with some of our native species having compound leaves with many leaflets such as; sumac, black walnut, and butternut. The leaf edges of all of these native trees have small teeth (serrations) while those on tree-of-heaven are smooth. The foul odor produced by the crushed foliage and the scraped bark is also unique to tree-of-heaven.

Site:
Adapted to a wide variety of soil conditions, tree-of-heaven quickly colonizes disturbed areas. Having long been established in some urban areas, it is now found growing in fields, roadsides, fencerows, woodland edges, and forest openings. Tree-of-heaven has become an agricultural pest and may occur as sprouts that pop up from root fragments in recently tilled fields, or persistent thickets in rocky, untillable areas. In forested areas, disturbance created by storms, insect infestation, and timber harvesting can open the way for tree-of-heaven to become established, often displacing more desirable native trees. 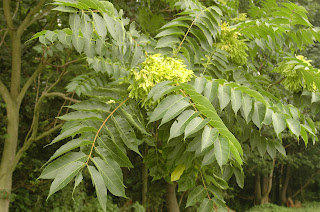 Spread:
One female tree-of-heaven can produce over 300,000 seeds in a year. These winged seeds are easily windblown and have a high-germination rate. This allows trees to colonize adjacent areas and invade forest interiors when canopy openings occur. Established trees constantly spread by sending up root suckers that may emerge as far as 50 feet from the parent tree allowing them to rapidly dominate sites. Root suckers as young as two years of age are able to produce seed. Tree-of-heaven also produces a toxin (referred to as allelopathic) in the bark and leaves which acts as a natural herbicide. As the toxin accumulates in the soil it inhibits the growth of other plants. All of these factors combine to make tree-of-heaven a very successful invasive plant.

Mechanical Control:
Using only mechanical methods for controlling tree-of-heaven may be counter-productive since the tree responds to cutting and girdling by producing large numbers of stump sprouts and root suckers. Stump sprouts can reach heights of 10 feet in one growing season. Hand pulling of young seedlings, not root suckers, may be effective when soil moisture is high and the entire root system is removed. However, small pieces of root are capable of generating new shoots.

Biological Control:
In 2009 a fungal wilt disease was discovered causing unprecedented wilt and mortality of tree-of-heaven in south-central Pennsylvania. The pathogen is currently being researched by Don Davis at Penn State, scientists from the U.S. Forest Service, and others. To date, the wilt disease has been reported in three states; Pennsylvania, Virginia, and Ohio. The wilt disease is caused by Verticillium nonalfalfae, formerly classified as V. albo-atrum. In field studies performed by Penn State University (Schall and Davis) all tree-of-heaven seedlings and canopy trees inoculated died within 3 months.

If V. nonalfalfae proves to be widespread, it may represent a natural biocontrol for tree-of-heaven. Since USDA APHIS evaluates and regulates new potential biocontrol agents on a state-by-state basis, it is important to document each state where V. nonalfalfae is killing tree-of-heaven, so that in-state inoculum can be used for biocontrol efforts. This will simplify the regulatory process. Pending further studies, including a risk analysis, Verticillium wilt of tree-of-heaven may be available as biocontrol agent. Currently no inoculum is available for public distribution. To assist you in locating trees that may be infected with Verticillium wilt a photo guide has been developed.

Chemical Control:
Typically the most effective approach for controlling tree-of-heaven involves the use of herbicides applied to foliage or frill (downward angled) cuts in stems. Foliar sprays are the method of choice where tree height and distribution allow effective coverage. Treatments can be applied with equipment ranging from truck-mounted high pressure sprayers to backpack sprayers. It is important to cover all portions of the canopy. Difficulties arise when trying to get adequate coverage of tall plants while protecting surrounding vegetation. To be most effective apply sprays in later summer or early fall, prior to the onset of fall color. This timing will limit re-sprouting from the root system. Herbicide mixtures containing glyphosate alone or in combination with metsulfuron methyl, triclopyr (amine), or imazapyr will provide control when applied to the foliage.

Frill herbicide applications, referred to as hack-and-squirt where a hatchet is used to make downward angled cuts through the bark, are highly selective. The cuts must penetrate the bark into the living tissue or sapwood. The downward angled cuts produce a cupping effect to hold herbicide. Concentrated herbicide solutions are sprayed into cuts using a squirt bottle. This method can be used on trees of any size and is most effective if applied from late summer to early fall when plants move the herbicide to the roots. Space the cuts so that 1 inch of uncut living tissue remains between them. Make approximately 1 frill cut per inch of tree diameter. If the stem is completely girdled the herbicide will not move to the roots and the tree will likely re-sprout from the stump and roots. Herbicides containing glyphosate, imazapyr, 2,4-D & picloram, and dicamba provide effective control using the hack and squirt method.

For well established, high density infestations a combination of foliar and frill herbicide applications are most effective. The initial foliar application will control most of the shorter stems while the hack and squirt application is used as a follow-up treatment to control stems that were missed or were too tall for adequate coverage.

Basal bark herbicide applications provide an additional method for treating tree-of-heaven with little or no non-target injury. Using a low volume spray wand, the herbicide and oil solution is applied completely around the stem from the ground line up to a height of 12-18 inches. To maximize herbicide translocation to roots, applications should be made during the same window as foliar and frill applications, late summer or early fall. Herbicides containing the ester formulation of triclopyr used in combination with imazapyr in oil are recommended for this type of application. Triclopyr ester alone has been shown to not translocate well in root systems and will likely require follow-up applications to root sprouts.

For safety reasons where the tree needs to be cut and removed from the site, the preferred approach is to kill the tree using one of the above mentioned methods prior to cutting. Cutting tree-of-heaven and treating the stump will prevent stump sprouts, but will have little impact on root sprouts. No matter the time of year, if the tree has to be cut it is better to treat the stump than not. When using water soluble herbicide solutions spray or paint the living tissue of the stump immediately after cutting. Glyohosate based herbicides in a 50% solution with water work well for this application.

Well established tree-of-heaven stands can only be eliminated through repeated efforts and monitoring. Treatments often only reduce the root systems making follow-up measures necessary. Small portions of the original root system that survive can quickly re-establish new trees. Persistence is the key to success.