Which Trees to Cut.....And Why 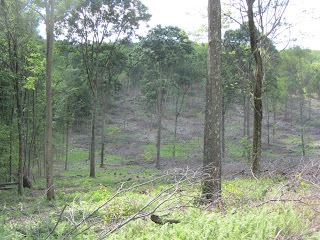 I had the below article sent to me earlier this month.  I thought it would make a great follow-up to some earlier posts on harvesting I made that received a lot of interest.

The first article I posted on April 27, 2016 entitled "Why the Forestry Profession Should Harshly Criticize High Grading" by Dan Pubanz.  Dan is a consulting forester out of Wisconsin.  His article first appeared in the winter issue of the National Woodlands magazine.

The second article, posted June 21, 2016, was a great follow-up written by Dr. Jim Finley, Penn State, Department of Ecosystem Science and Management. Jim's article was called "Describing Sustainable Timber Harvesting: What Do Words Mean?"  In the article Jim describes sustainable timber harvests as focusing on the residual trees you leave and/or the regeneration you establish.

The third article, posted November 2016, was a news story posted by the Pittsburgh Tribune about a logging job that was taking place in the Lower Burrell.  The article includes an interview with Tom McQuaide, a forestry consultant in Pennsylvania, where Tom compares a forest to a garden. He states, "you pick the mature fruit."

Now on to the most recent article, this one is a radio interview produced by West Virginia Public Broadcasting.  The person being interviewed is Kelly Riddle, a procurement forester with Allegheny Wood Products.  Give it a listen (6 minutes) or read the text I provided below.  Let me know what you think?  Was Kelly on track with his answers?

In the next part of our occasional series on the timber and forest products industry, we find out how timber cruisers -- or procurement foresters -- help landowners decide when to harvest trees in a timber stand, which trees to take and which ones to leave behind.

Riddle said deciding on which trees to take depends on several factors. “One that we look at is, first of all if we’re dealing with a private landowner, what their goals and objectives are. Second, we look at merchantability of the trees. What I mean by that – is it useable for a commercial process – whether it be for saw timber, or pulp wood or some other product? And then we look at the overall health of the stand and the trees,” he said, looking around a stand of trees he’d marked.

“This stand is composed primarily of yellow popular and soft maple, with some scattered oaks in here. I look at the size of the trees as an indication of whether they’ve reached their biological maturity or financial maturity,” Riddle said.

“Generally, once a tree reaches about 18 inches in diameter – and this depends on the site it’s growing on and other factors – it’s probably reached its financial maturity – meaning, if you harvested that tree, gained the revenue from that tree, reinvested in something else, you could do better from a financial standpoint than if you left that tree to grow. Biologically, the tree may have 50 more years that it could live and produce wood and other values. “The other thing we’re trying to do is create optimum growing space for the residual trees that you have.”

Age and Condition
Riddle walked up to tree in the stand. “This tree happens to be a yellow poplar – 24 inches in diameter. And given the age and condition of the stand I marked this tree because it’s mature, it’s ready to be harvested. And there are other trees adjacent to it – this hard maple for instance – that is one of the trees that I want to be the next stand,” he said. “So, by taking this yellow poplar out, it creates product for our sawmill and it also creates space for that maple to grow and be part of the next stand.”

When to Revisit a Timber Stand
Riddle said he typically goes back to any given stand about every five years to re-evaluate the growth and response since the last thinning.

“We typically look at a 12-15 year cycle of re-entry to harvest. In these stands that are even-aged – they were all re-generated about the same time – you can do that three or four times depending on the stands, the site and the characteristics of how good a site it is,” he said. “And then, towards the end of that 80 – 100 year period, you have to look at regeneration, maybe in the form of a ‘shelter wood’ type harvest, and get a more uneven aged management distribution.”

Riddle said a shelter wood-type harvest is a little more intensive harvest where you have fewer trees per acre that are remaining.

“It allows full sunlight to reach the forest floor, which most of our species here in Appalachia need in order to regenerate. All of our poplar, cherry, all of our oaks are shade-intolerant and they will not regenerate without that full sunlight, so it’s a requirement to initiate the next stand,” he said.

Signature Marking
Walking through the forest, Riddle pointed out the various types of marks he has put on the trees. These marks tell the loggers which trees to cut – and whether they should go to the sawmill nearby or the pulp mill in Luke, Maryland.

“Foresters have their own signature way of marking. If I have a tree that’s primarily a saw timber tree, I’ll just put a dot, whereas a lateral slash may mean that there’s some imperfection in that tree, or that it’s a pulpwood, or a cull type tree. A full cull tree would be an ‘X’,” he said.

‘Bad Management’
Riddle said there are some misconceptions about what “bad” management is. “Sometimes you have something that doesn’t look aesthetically pleasing and people might consider that to be bad management,” he said. “As foresters, we know that that’s not necessarily the case. There are some fairly intensive harvests where most of the material is removed that can be very good management, though it’s not aesthetically pleasing.”

Riddle said as a forester now for more than 30 years, the worst thing we can do is high-grade timber stands.

“That was a harvest philosophy where all you took was the best and left only the low-grade, non-commercial species – something like these soft maples that are damaged or have issues already. And all you were taking was the ‘cream’, so to speak,” he said. “If you do that more than one thinning cycle, then you’ve left a stand that has trees – it might look fine – but from a commercial standpoint, it has no value to the landowner.”

Riddle said we have a great resource in West Virginia as a whole. “We say that we’re trying to provide a resource for today and manage it for future generations,” he said.

This series is made possible with support from the Myles Family Foundation.
Credit Jesse Wright / West Virginia Public Broadcasting
Editor's Note: This story is part of an occasional series from independent producer Jean Snedegar about the timber and forest products industry here in the Mountain State -- from seedlings to final products.
Posted by David R. Jackson at 10:49 AM

This is excellent journalism and communicates the views of a forester who clearly knows what he is doing. While some of what he practices may seem to contradict the beliefs that others have expressed, there is agreement if we look deeply at the big picture.

One of the expressions attributed to Yogi Berra is, “You can observe a lot just by watching.” Being 85 years old, I have watched and observed most of a timber growing cycle of 80 to 100 years described by Kelly Riddle; and have found his views to be valid for harvests not only on my property, but also on adjoining woodlands.

Recognizing that he says, “not every stand or site is the same, “ we can agree that what is most important is what you leave after a harvest. The following general rules apply:

1. If you harvest marketable trees and leave junk, you have compromised the potential of the woodland.

2. If you harvest marketable trees and leave healthy growing trees of a desirable species, you are using the potential of the woodland.

3. If you reach a point where option two is no longer possible, you cut everything and start a new 100-year cycle.

It appears that the keys to successful timber management are to be flexible, patient, cooperate with nature, and think beyond our lifetimes.