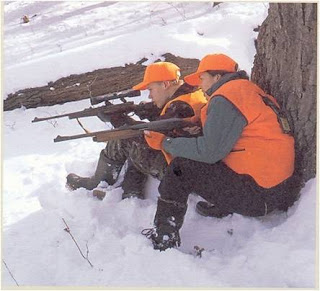 The Pennsylvania Game Commission today offered testimony to legislators on an issue important to the state’s hunters and trappers. Game Commission Deputy Executive Director Bryan J. Burhans testified before the Senate Game and Fisheries Committee about the potential expansion of Sunday hunting. The testimony is provided in full below:

“Thank you Chairman Scavello, Chairman Brewster, and members of the Senate Game & Fisheries Committee for the opportunity to come before you today in regards to the expansion of Sunday hunting in Pennsylvania.  I am Bryan Burhans, Deputy Executive Director for the Pennsylvania Game Commission.”

To be clear, we are in fact talking about the expansion of Sunday hunting opportunities in Pennsylvania.  Currently hunting on Sundays is permitted on a very limited basis in terms of species, but it is legal every Sunday throughout the year, not just the typical hunting season.  I believe that point bears repeating – every Sunday throughout the year. We have one of the most restrictive laws for Sunday hunting, and it is important to note that only four states currently prohibit Sunday hunting altogether – Maine, Massachusetts, Connecticut, and Delaware.

Contrary to some rhetoric that is floating around out there, the No. 1 reason that people stop hunting is lack of time.  The overwhelming majority of hunting takes place on Saturdays; people work during the week, don’t get a lot of time off, have other commitments, etc.  For a lot of hunters the only option is Saturday. By expanding Sunday hunting, we would be able to increase recreational opportunities for hunters.  Sunday hunting is an effective means of recruiting new hunters and retaining current hunters by increasing the value of the hunting license through offering additional opportunities to spend time in the field.

In a recent survey of lapsed hunters – those who at one time bought a license – 49 percent stated that having the opportunity to hunt on Sunday would encourage them to buy a license again.  Without having the ability to schedule seasons to include one of the days when individuals have the most amount of time available, the PGC is limited regarding what it can do to recruit and retain hunters.
Unfortunately, we know of many cases where Pennsylvania residents, particularly near the state lines, don’t even purchase a Pennsylvania hunting license.  Instead, they opt to drive an hour or so to hunt in Ohio or New York because they are able maximize the time they have available by hunting both Saturday and Sunday.

Likewise, we miss out on license sales to non-resident hunters because they don’t want to come to Pennsylvania to only be allowed to hunt on Saturday. Youth participation is vital to maintaining the long-standing tradition of hunting in Pennsylvania.  Over the past decade, we have worked to increase hunting opportunities for the youth; mentored youth hunting, early rifle season for deer, additional junior hunting privileges, early opening day for spring gobbler, junior pheasant hunts, junior waterfowl hunts, etc.

With a plethora of other activities vying for their time, especially during the week, and more and more activities taking place on Saturdays, it is difficult for young hunters to get out.  Even to assume that they have Saturday free, many hunters don’t want to drive a few hours to camp just for one day to hunt. We can effectively double the number of hunting days for youths during the school year by offering Sunday hunting.

Suppose you couldn’t golf on Sundays, or ski resorts were required to close on Sundays.  Would that be enough to drive the number of participants down?  Maybe a better question would be, to what degree would that drive participation down?  If you think about it, on a nice Sunday during the summer, just about any golf course is going to be booked with tee times from sun-up to well into the evening. The PGC recognizes that other recreational user groups are paying close attention to this issue as they have been for years – groups like the hikers, bikers, and horseback riders, among others.  These groups advocate for just one day per week that they can recreate as they choose without the fear of a hunting related incident or accident.

The truth of the matter is that these groups recreate 365 days per year, including Saturdays and Sundays during hunting seasons.  They recreate on State Game Lands, State Forests, at State Parks, and in the Allegheny National Forest; all lands where hunting is permitted. It is important to note that despite the inaccurate portrayal by these groups, hunting is an inherently safe sport.  In fact, over the past decade, hunting related shooting incidents have decreased by half.  In 2015, the total number of hunting related shooting incidents was 23.  Out of nearly 935,000 hunters, 23 incidents represents less than one one-thousandth of 1 percent.

We have heard from many people on both sides of the issue, hunters and non-hunters.  I can tell you that a majority of those that we hear from support Sunday hunting.  Where the difference is lies with what season they want Sunday hunting implemented.  Rest assured, that if given the authority to further regulate Sunday hunting, the PGC would be looking for input from a wide variety of stakeholder groups and will endeavor to engage these stakeholders before passing any new regulations in regard to Sunday hunting. Additionally, Sunday hunting will provide substantial economic benefits to rural areas and businesses by increasing money spent by hunters on lodging, food, gas and other incidental items.

According to the 2010 report by Southwick Associates, prepared for the Pennsylvania Legislative Budget & Finance Committee: In 2010, if Sunday hunting were permitted, considering spending and economic multipliers...  “Spending by all hunters would likely have increased by $460.0 million. The multiplier effects of that spending would have produced $803.6 million of total output in the Pennsylvania economy and supported 7,439 jobs with $247.4 million of salary and wage income. The increased activity would have generated $56.8 million in tax revenue to state and local governments and $60.7 million in federal tax revenues.”

By nature, Sunday hunting is what is commonly referred to as a blue law.  Blue laws are antiquated, religious-based laws that were originally designed to restrict or ban some or all Sunday activities in order to encourage a day of worship or rest.  To date, all but two blue laws in Pennsylvania have been repealed: the complete ability to hunt on Sundays, and the option to purchase a vehicle.
In 1937, the Legislature repealed the blue law that made it illegal to fish on Sundays.  The law was changed so that fishermen were permitted to openly fish any public waters, and allowed to fish private waters with the permission of the landowner.

According to the Pennsylvania Fish & Boat Commission’s historical records, “The Bureau of Law Enforcement reports that relatively few landowners take action to restrict fishing on Sundays, but anglers should respect "Sunday Fishing Prohibited" signs where they are posted. A person who violates a Sunday fishing restriction commits a summary offense of the third degree.” The PGC is willing to work with landowners who choose to not allow Sunday hunting on their land, even going as far as providing the corresponding signage at no cost to those landowners enrolled in our public access programs.  We are also willing enforce a Sunday hunting restriction for landowners, much like PFBC agreed to when their blue law was repealed.

Today, with the exception of hunters, every single person in Pennsylvania has the ability to recreate as they choose every day of the week.  In 1937, it was determined that fishermen should be allowed to recreate as they choose any day of the week.  It wasn’t mandated that you had to fish on Sundays, but you had the option.  Almost 80 years later, we are asking for the same consideration.  A considerable majority of hunters want the ability to recreate as they choose to on Sunday.  If an individual chooses not to, that is absolutely fine as well.  The time has come and hunters deserve the option. Thank you again for your consideration.  I would be happy to take any questions you may have.”