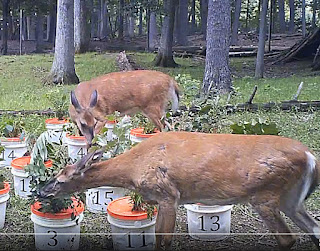 UNIVERSITY PARK, Pa. -- Selective browsing by white-tailed deer likely is promoting the spread of some invasive plant species in northeastern U.S. forests, as deer avoid eating vegetation they find unpalatable. That's the conclusion of researchers who conducted a study of deer dietary choices at the Penn State Deer Research Center, during which captive deer were simultaneously offered a selection of eight non-native invasive and seven native plants to determine the animals' preferences.

The research is important because it quantifies interactions between deer and invasive plants -- and how, over time, deer might be exacerbating problems with non-native plant species, according to researcher David Mortensen, professor of weed ecology in Penn State's College of Agricultural Sciences. He expects the findings to contribute to the conservation of forest understories and natural areas.

"This study provides evidence that deer impacts on plant invaders depend on plant species' palatability," he said. "Consequently, deer selectivity likely plays an important role in the invasion process. To the extent that herbivory impacts plant communities, these results suggest that deer promote the spread of some plant invaders by avoiding them."

In the study, published this month in the journal Biological Invasions, researchers documented feeding preferences of eight mature does without fawns through three seasons (late summer, early autumn and spring). The 15 plant species were offered in containers where deer could choose among them. A camera activated by a motion detector and infrared-enabled for night viewing allowed the researchers to observe and record deer behaviors. The amount of each plant consumed also was measured. 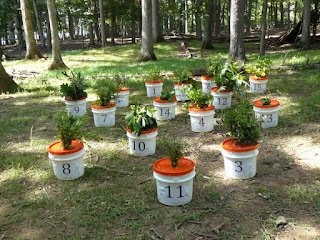 Deer clearly avoid certain invasive plants that are increasing in abundance in natural areas, suggesting that the herbivores are indirectly contributing to the growth and spread of unpalatable invasive plant species, noted lead author Kristine Averill, who spearheaded the research while pursuing her doctoral degree in Ecology at Penn State. Now a research associate in Cornell University's Soil and Crop Sciences Section, she suggested that deer preferences play an influential role in determining the species that make up plant communities.

"Together, these biomass consumption and behavior data indicate that deer selectivity likely depends more on species and growing season than on native or invasive introduced plant status," she said. "The extreme preference and avoidance among plant species observed in the preference trials suggest that deer-browsing selection occurs on a species-by-species basis, and likely according to species' traits."

At a minimum, Averill explained, the research indicates that deer might play an important and indirect role in the invasion processes of introduced plants. "These species-level, deer-plant interactions should contribute to deeper understanding of the variable patterns of invasive introduced plants across the northeastern U.S.," she said.

"It's pretty revealing that the findings in this study correspond to what we have been seeing in the field and confirm that deer preferences play a major role in plant community assembly." Still, some invasive plants that deer seemed to highly prefer are increasing in abundance in natural areas. That pattern may be exacerbated by the deer because these plants produce fleshy fruits that deer eat, and then the seeds of the plant are spread in their feces, Averill noted.

Also contributing to the study were Penn State researchers Erica Smithwick, associate professor of geography, and Eric Post, professor of biology. The study was funded partially by the U.S. Department of Agriculture.

Great information. Thanks for sharing