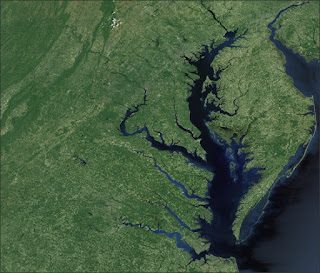 Interestingly enough I came across both of these related articles today and decided to share them with my readers. It seems we need to do a better job in our efforts at reducing the amount of non-point source pollution, predominantly from farms, reaching the Chesapeake Bay. As noted in the first article Pennsylvania needs to increase the number of farms under nutrient management plans and continue planting many more acres of forest and grass buffers along streams. In addition, the second article highlights a curriculum I use entitled "The Woods In Your Backyard." This curriculum is focused on landowner with 20 acres or less. It encourages them to begin managing their woodlots with a focus on getting rid of the mega-lawns in an effort to reduce pollution to the Chesapeake.

Environmental Protection Agency Administrator Gina McCarthy acknowledged this week that Pennsylvania had not done enough to control pollution flowing into the Chesapeake Bay, and said that her agency needed to coordinate with agriculture officials to change the course.

Pennsylvania’s lack of progress is “discouraging at the very least,” McCarthy told hundreds of environmental activists, government officials and foundation leaders attending the Choose Clean Water Coalition conference in Annapolis. “I need to talk to the USDA as well,” she added, to applause, “because there is work that needs to be done.”

EPA officials and the states involved in the Bay cleanup have known for years that Pennsylvania lagged behind. But a report released last June showed the Keystone State would need to double the number of farm acres under nutrient management and plant seven times as many acres of forest and grass buffers as it did in 2014 to meet its interim reduction targets under EPA’s Total Maximum Daily Load pollution diet.

Pennsylvania contributes a large share of the pollution loads to the Chesapeake Bay, and agriculture is the bulk of that. The state has 35,000 farms in the Potomac and Susquehanna watersheds, according to Richard Batiuk, associate director of science, analysis and implementation for the Chesapeake Bay Program. Many of these farms are small dairy farms, exempt from the Clean Water Act regulations of animal farms because they are too small to meet the thresholds. Some are also Amish and Old Order Mennonite operations, and those farmers are hesitant to take government funds to modernize their operations to control pollution.

Small woodlots are a big deal to the Chesapeake’s restoration

The commencement of spring is always a significant moment in our Chesapeake forests. Buds swell, ready to break dormancy and add the first of the year’s growth to the canopy while green hues begin to emerge from the forest floor.

It is also significant for forest enthusiasts who, themselves, are breaking from the wintertime’s stupor. For me, spring always provokes an eagerness to get out into the woods just to be there.

It is no wonder that there are many springtime events honoring trees, from maple syrup festivals and the National Cherry Blossom Festival that recognize specific attributes of particular species to Arbor Day, which simply celebrates all of the services that trees and forests provide: cleaning our air, creating habitat, contributing to our economy and providing recreation.

There is little debate as to how crucial forest functions are to the quality of our streams, rivers and the Bay. The Chesapeake Bay Program model estimates that our woodlands prevent more than 180 million pounds of nitrogen from reaching the Chesapeake each year. Around 80 percent of these forests are owned by more than 900,000 private landowners or entities.

Since the 1980s, the region has been losing forest land at a rate of 100 acres per day to development. The forests that remain are more fragmented than ever and face new pressures: invasive plants and pests, diseases, browsing by deer, high-grade harvesting (cut the best and leave the rest) and air pollution. All of these reduce our forests’ ability to provide the vital ecosystem services we depend on to help us restore the Chesapeake.

Although total forest acres are decreasing throughout the Chesapeake region, the number of private forest owners is increasing as land is often divided or sold off in smaller parcels.

For the rest of the story click here.
Posted by David R. Jackson at 9:40 AM