A way to reduce the high number of deaths of migratory bats at wind turbine sites may lie in a groundbreaking study at Iberdrola Renewables' Casselman Wind Power Project in Somerset County. During the study, conducted at the 23-turbine project from late July to early October, selected wind turbines were stopped during low wind conditions to determine whether shutting down the big blades during low power production periods would reduce bat deaths while having a minimal impact on power generation.

"As responsible stewards of natural resources, we recognize there is an impact on bats that requires scientific study," said Andy Linehan, wind permitting director for Iberdrola, the world wind-power leader. "The new information generated by the Casselman project will be useful in improving many techniques for reducing wildlife risk at those wind power sites where there are significant impacts to bats." Iberdrola will dedicate the 34.5-megawatt Casselman turbine project today. The turbines have been operating since February. Gov. Ed Rendell, a vocal supporter of wind power, is scheduled to attend the noon ceremony at the project near Garrett.

Wind energy holds promise as a clean, renewable energy source. But there have been high numbers of bats killed at many wind-energy facilities and it remains unclear why some bat species seem susceptible to such collisions, especially in the eastern United States, and especially during low wind conditions. "We need to develop renewable energy resources, and we would like to develop those responsibly," said Ed Arnett, a principal wildlife investigator for Bat Conservation International, a conservation group that is part of the Bats and Wind Energy Cooperative. Other members of BWEC are the American Wind Energy Association, the U.S. Fish and Wildlife Service and the National Renewable Energy Laboratory. The cooperative's work since 2004 focuses on identifying and reducing the effects of wind energy on bats.

Previous BWEC research suggests that bat fatalities occur primarily on low wind nights when turbines are operating at low power but in some cases the turbine blades are rotating at or near maximum speed. Scientists think that shutting down those facilities during those low-wind periods could significantly reduce bat fatalities with only a modest reduction of power production. "The U.S. Fish and Wildlife Service is concerned that several species of bats, including potentially endangered bats, are killed each year by wind turbines," said Alex Hoar, the service's northeast coordinator for review of wind power projects. "The Service is pleased to be helping fund this precedent-setting study to test if slightly changing the way a wind turbine operates can substantially reduce or even avoid killing bats." The results of the Casselman study will be made public after they are reviewed by BWEC's scientific advisory committee.

Pennsylvania is the leading producer of wind energy east of the Mississippi River, generating more than 153 megawatts, enough to power 70,000 homes. The Rendell administration has been a major supporter of wind energy and has set a goal to boost wind power production to more than 3,000 megawatts, a twentyfold increase, over the next 15 years. But such a massive expansion of wind energy along Pennsylvania's windiest Appalachian ridges -- which also happen to be bat and bird migratory routes -- has the potential to kill thousands of bats and birds. In 2004, hundreds of migratory birds and up to 4,000 bats were killed by the whirling blades of 44 turbines in the Mountaineer Wind Energy Center on Backbone Mountain in West Virginia. And just down the road from Garrett in Meyersdale, Somerset County, hundreds of bats were killed at a 20-turbine wind power operation. 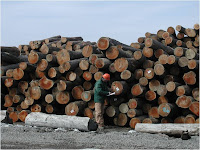 Below is a link to an excellent 9 minute forestry career video now available on You Tube. The video was produced by Career Gates PA and is entitled Lumber. It highlights careers in the forest industry with live interviews of actual employers from our very own local PA industries. Careers highlighted include sawmill workers/managers, trucking companies, loggers, and foresters. If you have an interest in a career in the forest industry be sure to check it out. This is also an excellent video to share with high school Vo-tech classes.
The local Pennsylvania industries highlighted in the video include; Lewis Lumber, Conestoga Wood Specialties, Shoemaker Trucking and Processing, and Pine Creek Lumber.
To watch the video click the link below.
http://video.aol.com/video-detail/pbs-39-career-gates-pa-lumber/1524796374
Posted by David R. Jackson at 1:33 PM No comments:

Understanding forest taxes and financial planning can save forest landowners money. There are numerous tax and financial incentives and tools that are often unknown not only to landowners but their advisers such as accountants, attorneys and forestry consultants. Penn State’s School of Forest Resources will be hosting a series of one-day workshops on forest finance and taxes across the state this fall.

Workshops will be held in Westmorland County, Centre County, Cumberland County and Clarion County. The objectives of the workshops are to provide clients with knowledge of key up-to-date aspects of forest taxes and finance that will affect their businesses. Each workshop is devoted specifically to tax or finance issues. The tax workshops are geared toward accountants and financial advisers, while the finance workshops are more tailored for foresters and forest landowners. However, anyone involved in owning, managing or advising on timberland management would find either or both these workshops useful.
The workshops will be led by Dr. Michael Jacobson, an associate professor and extension specialist in the School of Forest Resources. He has over 12 years of experience formally educating the forestry community on these issues. He will be assisted by Lloyd Casey who has decades of experience teaching forest taxes.
For more information, specific dates of each workshop and registration contact Mike Powell at the Penn State School of Forest Resources: Phone: 814-863-1113 or E-mail: mjp175@psu.edu
Posted by David R. Jackson at 8:29 AM No comments:

I was just notified by Pat Baxter from WPSU-TV. They have just completed posting a number of educational videos concerning gas leasing in the Marcellus Shale on You Tube. They include live interviews with Penn State professionals and company representatives as well as live video of an actual drilling site.


Fracing a Natural Gas Well
This is short three minute video produced by Penn State Cooperative Extension Educator Dave Messersmith. The video shows an actual well drilling site in Lycoming County. The site is owned and operated by Chief Oil an Gas. The video was produced in February 2008. http://www.youtube.com/watch?v=QefLQKLb5co

Gas Exploration in Pennsylvania
Pennsylvania is in the midst of a natural gas rush with gas companies buying up mineral rights from landowners all over the state. Patty Satalia talks with Penn State professor Terry Engelder about what exactly the gas companies are drilling for and Penn State Cooperative Extension agent Tom Murphy about what landowners should think about if approached by a company looking to buy their mineral rights. To view the full 21 minute video go to:
http://www.youtube.com/watch?v=z4SH3gmQH7E

For additional information go to: http://naturalgas.psu.edu/
Posted by David R. Jackson at 10:02 AM 1 comment: