The Value of Using Wood: Wood Makes a Building Green

First, I wanted to share with my readers a new video that was recently released by the American Forest Foundation.  It is entitled Wood: A Better Way to Build and was produced in partnership with the US Forest Service Forest Products Laboratory.  It provides a great argument for using wood as a green sustainable building material.

Here are some of the talking points developed in the six minute video:
1.  Wood is the only major building material that is renewable and sustainable over the long term
2.  Wood provides a 70-80% reduction in emissions compared to concrete and steel
3.  Using wood contributes to the livelihood of 11 million private forest landowners across the US
4.  Using wood allows us to maintain healthy rural communities
5.  Wood feels good, is warm, and has a lot of aesthetic appeal

Next, this video compliments the recent announcement (October 25, 2013) concerning the US General Services Administration's (GSA) recognition of wood as a sustainable building material.  The GSA has agreed to recognize both Green Building Initiative's Green Globes and U.S. Green Building Council's Leadership in Energy and Environmental Design (LEED) as viable green building rating systems.  For many years the GSA has only recognized LEED, which discourages the use of wood.  This means that the GSA, and other federal agencies, can choose not to use LEED.  This change will allow the federal government to use more wood in their buildings. To read the full announcement on Yahoo.com click here.

Additional reasons why wood is a good choice:
- Wood is better for the environment in terms of greenhouse gas emissions, air and water pollution, and other impacts.
- Wood helps reduce energy consumption across the life cycle of growth, harvest, transport, manufacture and construction compared to other structural building products.
- Wood can improve energy efficiency, serving as an excellent insulator.
- Wood products store carbon, helping to mitigate climate change.
- Using wood helps to sustain our forests and increases our carbon storage potential.
Compiled from the American Forest Foundation.

Posted by David R. Jackson at 4:23 PM No comments: 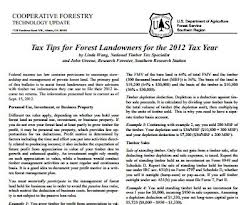 It's getting to be that time of year, landowners are beginning to think about getting their taxes in for 2013.  The USDA Forest Service has recently release their Tax Tips for 2013.  The annual bulletin provides federal income tax reporting tips to assist forest landowners and their advisors in filing their 2013 income tax returns.  The tip sheet provides useful examples and calculations landowners can use to assist them in calculating their own tax.

I wanted to share the research project with my readers.  It is certainly applicable to Pennsylvania with the big push in the state to create early successional and young forest habitat.  A research paper was recently published in the journal Forest Management and Ecology.  The article is entitled Long-term response to disturbance-associated birds after different timber harvests.  The research was conducted by Roger Perry and Ronald Thill both from the US Forest Service Southern Research Station.  The authors looked at changes in early successional bird abundances of 12 species for 16 years after harvest under 4 regeneration methods.  These included: clearcutting, shelterwood, single-tree selection, and group-selection harvests.

Here are some of the highlights of their research findings:
1. Detection rates generally peaked 5 years after harvest.

2. Clearcuts retained some species for longer periods than other treatments.
3. Some species benefitted more from partial harvesting than clearcutting.
4. Greater expanses of partial harvests may be needed to sustain population levels similar to those
found in clearcuts.
Abstract:
Timber harvest provides favorable habitat for many species of shrub-dependent birds. Because of historical dominance, effect of clearcutting on early successional birds has been widely studied, but less information is available on alternatives such as shelterwood and group selection, which have become a more dominant means of regenerating pines (Pinus spp.) on federal lands of the southeastern US. We compared detection of 12 species of early successional forest birds prior to harvest and at various intervals for 16 years after harvest in stands subjected to clearcutting, shelterwood, single-tree selection, and group-selection harvests. We also compared detection rates of these species between harvested and unharvested control stands.
To read the full abstract and view some of the tables click here.
Posted by David R. Jackson at 12:55 PM No comments: 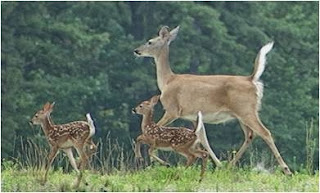 A new Deer-Forest Study is now underway in Pennsylvania.  The DCNR Bureau of Forestry in partnership with Penn State University, The PA Game Commission, and the U.S. Geological Survey’s Pennsylvania Cooperative Fish and Wildlife Research Unit are taking a closer look at deer, forest, and hunter interactions on 3 state forests in central and north central Pennsylvania; the Bald Eagle, Rothrock and Susquehannock State Forests.

Researchers will be investigating deer numbers, impacts on vegetation, and impacts of deer on forest regeneration and plant species composition in both Deer Management Assistance Program (DMAP) and non-DMAP areas.  DMAP allows landowners to harvest additional antlerless deer from their properties in addition to any doe licenses allocated to the corresponding wildlife management unit by the Commission.  Field data will be collected on forest regeneration, deer impacts, deer populations, and forest-management practices.

Hunters will also be involved in the Deer-Forest Study.  The study will assess hunter activities and experiences through hunter surveys and gathering information on their activities while hunting the study areas.  Hunters are asked to register when hunting these study areas.  Hunters can view maps and register by visiting the White-tailed Deer page at the Game Commission’s website then clicking on the “Deer-Forest Study” link in the “Research and Surveys” or by clicking here.  Study areas will be clearly marked with signs in parking lots and along roads.

To summarize, a better understanding of deer impacts in real-world conditions in Pennsylvania will help ensure that recommendations made to reduce deer populations due to forest impacts are truly necessary.