The following news release came out of the Harrisburg USDA Natural Resource Conservation Service office last week.  The program looks to restore wetlands and early successional habitat for bog turtles and golden-winged warbler respectively.  Both of these types of habitat have been degraded or are in decline and both provide critical habitat for many other species as well.  In particular we are seeing a big push to create early successional habitat to favor other species like woodcock.

Harrisburg, PA, April 23, 2012
﻿
﻿ Pennsylvania farmers and forest landowners are being urged to sign-up now for assistance to protect and restore habitats for the northern bog turtle and golden-winged warbler through the Working Lands for Wildlife partnership.


Working Lands for Wildlife is a new partnership between USDA’s Natural Resources Conservation Service (NRCS) and the Department of Interior’s U.S. Fish and Wildlife Service (FWS) to enhance natural resources by improving and protecting wildlife habitat.


Working Lands for Wildlife is funded through USDA’s Wildlife Habitat Incentive Program (WHIP), which will share the cost of conservation practices with landowners in areas known to support one or both of these selected species. Examples of conservation practices that improve habitat for bog turtles include wetland restoration, prescribed grazing, brush management, and fencing; and for golden-winged warbler, early successional habitat management.

Bog turtles and golden-winged warblers are two of seven selected species nationally that are being focused on because of their declining populations. One of the smallest turtles in the world, the bog turtle has been protected under the Endangered Species Act since 1997, when it was listed as a threatened species. The golden-winged warbler is a migratory song-bird that is at-risk for listing under the Endangered Species Act.

Applications within priority Bog Turtle and Golden-Winged Warbler habitat areas will receive the highest consideration in Pennsylvania. To view a map of these areas: Bog Turtles or Golden-winged Warblers. Interested producers and landowners in targeted areas can enroll in the Wildlife Habitat Incentive Program (WHIP) on a continuous basis at their local NRCS field office, but are encouraged to apply now while funds are available.
Posted by David R. Jackson at 11:43 AM No comments: 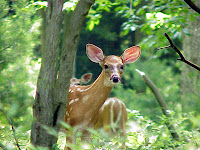 A couple of things to share with my readers.......The first is the Spring 2012 Research Review publication put out by the US Forest Service Northern Research Station entitled Deer Can Be Too Many, Too Few, Or Just Enough For Healthy Forests.  This 6 page booklet provides an excellent synopsis of deer populations and their interactions with forests.  The booklet is ideal for distribution to general audiences.  The publication also contains several references and websites for additional information.

Second, the Pennsylvania Game Commission surveyed Pennsylvania deer hunters in 2011.  The preliminary results of the survey were released today.  To view the complete report visit the Game Commission’s website (www.pgc.state.pa.us), select the “White-Tailed Deer” photo button on the homepage, and click on “2011 Pennsylvania Deer Hunter Survey Preliminary Results under “Deer Hunting.” Below is the news release.

HARRISBURG – Deer hunters have long been recognized as Pennsylvania’s most devoted hunters and their commitment to hunting has helped keep wildlife management afloat in this state for almost 100 years.  But who are these people? How and where do they hunt deer? Do they support or oppose the agency’s deer management program? The results of a recent Pennsylvania Game Commission survey of 5,892 randomly selected deer hunters now sheds light on their preferences.

“Hunters returned 3,572 surveys, which resulted in a response rate of 61 percent,” said Carl G. Roe, Game Commission executive director. “We were pleased with hunter participation in the survey, because it improves substantially the accuracy of responses hunters provided in this important periodic survey.”

Posted by David R. Jackson at 3:32 PM No comments:

Pennsylvania's state tree, the eastern hemlock, is threatened by the hemlock woolly adelgid in about three-quarters of the state's counties.  Last week on April 10th a forum of proffessionals met at Penn State University Park Campus to examine the problem more closely and discuss current research attempts and trends.  The below article appeared in the Centre Daily Times.

UNIVERSITY PARK — Pennsylvania’s state tree — the eastern hemlock — is threatened by a bug in about three-quarters of counties.  Local farmers hope to draw attention to the problem, and Penn State researchers are working to find a natural enemy to combat the bug — the hemlock woolly adelgid.

Landowners and Penn State, state and federal forestry officials gathered on campus Tuesday for a public forum on the issue, hosted by U.S. Rep. Glenn Thompson, R-Howard Township.  Thompson, chairman of the subcommittee on conservation, energy and forestry, organized the forum after retired farmer Jim Walizer approached him for help with the insect.

Walizer, a retired farmer who lives in Walker Township, bought forest land in 1984, then attended a forestry session with Penn State’s Cooperative Extension, and became involved with various groups, including the Pennsylvania Forestry Association.

To read the rest of the story click here.
Posted by David R. Jackson at 3:48 PM No comments:

From Tree to Baseball Bat

With today being the opening of the baseball season, I thought it would be fitting to share with you a video that records the process of a tree being harvested and processed into a bat.  Take a few minutes and enjoy this intro segment by ESPN.  It features the creation of a Louisville Slugger bat from a tree harvested in Warren, Pennsylvania all the way through the process until it is put in the hands of a player.  It is well done and well worth watching.
To watch click here.
Posted by David R. Jackson at 9:44 PM No comments: 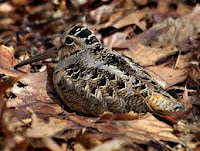 Penn State Natural Resources Extension will host Linda Ordiway, a biologist with the Ruffed Grouse Society, as she presents; Early Successional Habitat: More than Meets the Eye on Tuesday, April 10th at noon and again at 7 p.m on the Pennsylvania Forests Web Seminar Center.  This webinar will inform landowners, managers, and consultants of the advantages and needs of early successional habitat within the landscape.  There are two distinct types of early successional habitat: the old field scrub/shrub habitat and that created through timber management.  Each web seminar lasts approximately one hour.

This webinar will briefly cover the history of how we got to where we are today with the condition of our forests and the low percentage of early successional habitat within the landscape.  With a lack of quality young habitat, due to urban sprawl and lack of forest management, there is a decline in certain songbirds, ruffed grouse, American woodcock, as well as numerous other species.  It is important to note that early successional habitat benefits a wide range of native flora and fauna from a bottom up approach.

To participate in the live seminars you must register to receive reminders.  The "Register Now" page on the website will walk you through this process.  To log into the site you will need to use your Penn State UserID and password (or Friend of Penn State account).  Or we have a new feature that allows participants to log in as a “Guest” with no need for a UserID or password.

Participation in the web seminar does not require any special software.  To view live and previously recorded seminars all you need is a high-speed Internet connection and sound.  Each session is recorded and loaded onto the Web Seminar Center along with a copy of the presentation and any handout materials.  So, if you are unable to participate in the "live" session, a recording of it will be available for you to view at your convenience.  Of course, none of the interactive elements will be available when watching the recording.
Posted by David R. Jackson at 4:19 PM No comments: