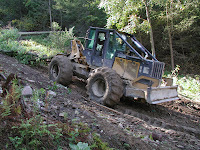 When trying to control invasive plants we often talk about using an integrated approach or "integrated vegetation management."  I write about this on my Forest Vegetation Management web site.  Each form of control is highlighted with an emphasis on chemical since this is often the most productive approach when manpower and dollars are limited.  It was brought to may attention that the US Forest Service has a new publication out entitled Proposed BMP's for Invasive Plant Mitigation During Timber Harvesting Operations.  I thought I would share this with my readers, since my vegetation site does not specifically address the disturbance opportunity associated with timber harvesting.

Invasive plants are opportunistic and disturbance adapted.  This is something I have really begun to notice about the ongoing battle with invasive plants.  On many properties visited I have been reluctant to recommend a harvest since it often means opening the door for invasive plants to get a strong hold on the site.  It can be a tremendous cost in time and money to keep invasive plants under control.  By implementing some of the Best Management Practices (BMP's) outlined in the publication maybe we can keep the invasion of invasive plants to a minimum.  It is certainly something to consider prior to harvesting.

Abstract: The invasion and spread of invasive plants is a major problem in forested ecosystems. Invasive plants can displace existing vegetation and in some cases take over the site. With the displacement of native vegetation come major ecosystem changes that may jeopardize ecological processes and functions as well as habitat for wildlife. The disturbance caused during timber harvesting processes creates conditions that encourage the establishment and spread of invasive plants. The machinery and traffic movement within a job site may introduce and spread seeds, roots, and plant parts from one job site to another. In this report, we address the timber harvesting processes and the disturbance that is created; explain how seeds, roots, and other parts of invasive plants can be spread; address the opportunity costs involved and those responsible; and propose voluntary BMPs for invasive plant mitigation during timber harvesting operations.
Posted by David R. Jackson at 3:07 PM No comments:

Looking at Four Centuries of Change in Northeast Forests

A Harvard-Smithsonian study released on September 5th in PLOS ONE compared modern forests to their pre-colonial condition.  The purpose of the study was to answer the fundamental question: How similar are today's forests to those existing prior to European colonization?  What they found might surprise you.

Researchers looked across a 9 state region from Pennsylvania to Maine comparing more than 300,000 witness tree records and compared them to modern US Forest Service data.  The northeastern United States is a predominately forested region (80% forested) that has undergone a 400-year history of intense logging, land clearing for agriculture, land abandonment, and natural reforestation. During the 18th and 19th centuries more than half the forestland was cleared for agriculture and cut for timber. Most farms were eventually abandoned, and during the 20th century, forests returned.

Below are a number of key findings:
1. Looking only at a tree species list Northeast forests haven't changed.
2. Maples have exploded across the Northeast, increasing by more than 20%.
3. Beeches, oaks, and chestnuts have declined sharply.  This is of concern for wildlife depending on nuts for winter survival.
4. Pine numbers have shifted more than any other tree type, increasing in some places, decreasing elsewhere.
5. Colonial farming history was found to be the most powerful factor in determining modern forest composition -- more powerful than regional climate, soil conditions, and numerous other factors.
6. Todays forests are more homogenous and less responsive to small changes in temperature and precipitation.

David Foster, a co-author on the study, indicated that despite the impacts of disturbances such as forest clearing, widespread logging, fires, climate change, invasive pests, and disease, the Northeast remains the most heavily forested region of the country.  Foster also notes, "If we do not replace forests with houses and pavement, they will endure future challenges as well." 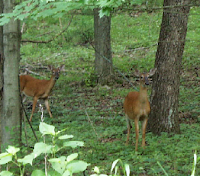