Lisa Williams is a ruffed grouse biologist with the Pennsylvania Game Commission. She and her colleague filmmaker Tracy Graziano recently released an excellent short (9 min.) documentary on the impact West Nile Virus is having on ruffed grouse populations.  The film has received national recognition.  A news release went out last week from the Commission.  I wanted to share the release and the video with my readers.  Check it out below or by clicking here.  There is also a link to a live webinar recording Lisa did on the topic as well.  Very interesting.

Between 2001 and 2005, the ruffed grouse population suffered a 63 percent decline in Pennsylvania. No one was sure why but in 2015 through 2016, Game Commission biologist Lisa Williams and her team confirmed their suspicions about Pennsylvania’s state bird being affected by the West Nile Virus (WNV).

After the challenge study was completed, the laboratory findings were then tested on wild grouse in Pennsylvania by looking for WNV-positive antibodies in harvested grouse. This testing is the first of its kind where lab results were then tested in wild populations.

Williams rallied hundreds of hunters across the state to send in blood samples when they harvested a grouse during the hunting season. Game Commission pathologist Justin Brown and their research partners at Colorado State University and the University of Guelph then did the careful lab work to assess WNV exposure in wild grouse. By incorporating these findings into habitat management planning, the Game Commission and partners hope to direct habitat management efforts to areas where grouse populations have the best chance of responding.

Williams’ research then caught the ear of one of the Game Commission staff filmmakers. Game Commission filmmaker Tracy Graziano, armed with her Canon C500 and Final Cut X editing program, set out to tell Williams’ story that continues to unfold even today. Graziano completed the 9-minute documentary in late January 2017 after 18 months of shooting and countless hours in the field. She has been with the agency for eight years but has been creating science and wildlife documentaries since 1999.

“The most rewarding thing I can hope for in any of my film projects is to help influence change for the benefit of wildlife and conservation,” said Graziano. “With more than 27,000 YouTube views to date, I believe the ‘Ruffed Grouse’ film was critically important in raising awareness among hunters about the risk of WNV to grouse and is one of the reasons other state wildlife agencies started looking into WNV as a contributing cause of decreasing grouse populations,” Lisa Williams said.

Game Commission Executive Director Bryan Burhans concurs. “Lisa Williams’ research into the ruffed grouse population decline in Pennsylvania is cutting-edge science-based wildlife management,” Burhans said. “Documenting these important findings by using the latest technology by skilled filmmaker Tracy Graziano so others can learn and benefit exemplifies why the Pennsylvania Game Commission is at the forefront in modern wildlife management.”

This past July, the “Ruffed Grouse” film was recognized with its most recent award at the Association for Conservation Information (ACI) conference in Springfield, Missouri. The film took third place in the 2018 “Video Long” category. ACI is a professional organization that recognizes excellence in educational work completed by state and federal fish and wildlife agencies across North America.

Posted by David R. Jackson at 1:02 PM No comments: 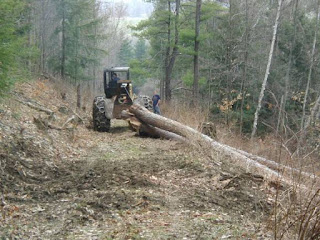 Pennsylvania Law recognizes and protects forestry as a beneficial land use, but some-times timber harvesting operations run into issues with unauthorized local ordinances.

On July 6, 2005, Act 39 also known as "ACRE" (Agriculture, Communities and Rural Environment) went into effect to ensure that ordinances adopted by local governments to regulate normal agricultural operations (which includes forestry and timber harvesting) are not in violation of state law.


Spotted Lanternfly Permits are required for businesses and organizations moving within or from the quarantine zone in the course of work activities. Currently the counties of Berks, Bucks, Carbon, Chester, Delaware, Lancaster, Lebanon, Lehigh, Monroe, Montgomery, Northampton, Philadelphia and Schuylkill are under quarantine, but this is subject to change should SLF be discovered in any other areas.

Working with PDA, Penn State Extension just launched an online course for companies to receive training and permits as needed. You can find the course at here.

Companies should designate specific employees to take the course. Once a designated employee passes this course, his or her company will receive spotted lanternfly permits for company vehicles. The designated employee must train fellow employees to work in the quarantine zone without inadvertently spreading these insects and endangering agriculture and commerce. This course includes fact sheets to use with training.

PLEASE NOTE: YOUR COMPANY MAY REQUIRE A PERMIT, EVEN IF YOU ARE NOT MOVING FOREST PRODUCTS!

Below are examples from the Pennsylvania Department of Agriculture:

Do I Need a Permit?
Spotted lanternfly permits are required for Businesses and Organizations if you are moving within or from the quarantine zone in the course of your work.

Examples:
·         A tax preparation business has an office within the quarantine zone. Employees drive their personal cars to work and work in the office all day. The business has no company cars, and is not actively moving products. This business does not need a permit. However, employees are encouraged to complete and carry a compliance checklist in their own vehicles.
·         A potato chip company has a manufacturing facility in the quarantine zone that packages pallets of product, and ships either in its own fleet of trucks or with common carriers. This business needs a permit. The company should designate one or more supervisors/managers in charge of warehousing or trucking to take the permit training and exam, and request enough permits to cover all vehicles under his/her authority. That designated person should then train all workers in the product movement/transport stream and maintain a record of who has been trained. They should place a permit in each company vehicle, along with documentation to show that inspections are being done and control measures (such as vehicle washes) are done at appropriate times to keep spotted lanternfly from moving with the product or vehicle. Training and inspection/control records must be kept for two years.
·         The PA Department of Agriculture (PDA) has a regional office within the quarantine zone. In the course of their duties, some regional staff drive state vehicles within the zone, and some drive in and out of the quarantine zone. This organization needs a permit. A designated regional employee should take the permit training and exam, requesting enough permits for all vehicles in the work group. The designated employee then trains others in the group, maintains the training record, and provides the permits to be in each vehicle. Each vehicle should carry a log to track Spotted Lanternfly inspection or control measure activities. Records must be kept for two years.
·         A business based in western Pennsylvania, outside the quarantine zone, routinely delivers truckloads of product to New Jersey, also outside any quarantine area. The truck drives through the quarantine area but does not stop to load or unload any product. This business does not need a permit. However, the business should consider securing the truck and load from hitchhiking Spotted Lanternfly.
·         An agricultural business that is based outside the quarantine zone routinely delivers produce to a retail distribution center in the quarantine zone. The truck stops in the zone, unloads product, may or may not load material for the return trip. This business needs a permit. This business, although it is based outside the quarantine zone, needs to have a Spotted Lanternfly permit.

Posted by David R. Jackson at 1:13 PM No comments: