In an earlier post I provided an update on captive deer that tested positive at a deer farm in Adams County, Pennsylvania (see Friday, October 26th post).  In that post I mentioned that a captive deer from the farm escaped while they were in the process of euthanizing the animals that may have been exposed to the disease.  I have some good news to share, apparently that deer has been killed by a hunter in the area.  The doe was easily identified by it's pink ear tag and the number 23.  This is very good news for deer and deer hunting in Pennsylvania as this disease could devastate wild deer populations.

Below is the news release from the PA Department of Agriculture, November 26th.

Agriculture Department to Test ‘Pink 23’ Adams County Escaped Deer
A doe that escaped from a quarantined Adams County deer farm in October was shot by a hunter today and is now being tested for Chronic Wasting Disease, according to the Pennsylvania Department of Agriculture.

"The department has been working to prevent further spread of the disease," said Agriculture Secretary George Greig. "The capture and testing of this escaped deer will allow the department to close this chapter of the investigation." State veterinarians identified the doe by its pink farm tag. Testing for Chronic Wasting Disease will be done at the Pennsylvania State Veterinary Laboratory in Harrisburg and will take up to two weeks.

Chronic Wasting Disease attacks the brains of infected antlered animals such as deer, elk and moose, producing small lesions that eventually result in death. Animals can get the disease through direct contact with saliva, feces and urine from an infected animal.

For the rest of the story click here.
Posted by David R. Jackson at 9:23 AM No comments:

I thought I would share with you the new app that was launched by Ohio State University, the University of Georgia, and several other entities across the region. It is called the Great Lakes Early Detection Network (GLEDN).  It is currently availabe in the Android version and plans are in the works to release an iPhone version soon, probably December or January.

Check it out and see if it meets the need.  This has some real possibilities for tracking new insect infestations such as Asian longhorned beetle, emerald ash borer, and hemlock wooly adelgid. 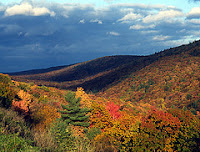 For those of you who may be thinking about a possible career in forestry and natural resources, the Society of American Foresters (SAF) has recently completed a booklet entitled Guide to Forestry and Natural Resources Programs.  The guide is an excellent source if information where you can learn about SAF-accredited programs at colleges and universities all across the United States.  Each program is highlighted giving you an opportunity to learn what they have to offer and helping you choose the one that is right for you.  There are many options to choose from.
﻿ ﻿

﻿﻿﻿﻿﻿﻿ Have to put a plug in for Penn State here....vist the "new" Department of Ecosystem Science and Management at Penn State, University Park, formerly kown as the School of Forest Resources.  You may find the degree program you are looking for!