With the bear hunting season currently underway in Pennsylvania for the next few days I felt it would be appropriate to share this information with my readers.  The below article was written for Virginia but Pennsylvania is experiencing the same shortage of acorns statewide as well.

After the bumper crop of acorns Pennsylvania had in 2012 we are experiencing a severe acorn shortage this fall.  Many wildlife species rely upon acorns to fatten up before winter sets in.  In fact, in a news release from the PA Game Commission chief forester Dave Gustafson indicated, "This year has produced a spotty acorn crop statewide.  A late spring frost affected white oaks and chestnut oaks. And a cold wet spring in 2012 affected red oaks, which take two years to produce.  Those conditions have combined to limit acorn availability in many areas.  That's not to say there aren't acorns to be found.  In some cases, though, it can take some work to find them."

Points of interest:
1. During acorn shortages a bears range may double or even quadruple
2. Bears may go into hibernation earlier during shortages
3. In years of mast failures bear cub survival declines
4. A bears lifetime is typically 12-15 years
5. In years of mast failures bears turn to alternative food sources, including human provided sources
6. A bears lifetime can be cut in half if it has access to human-style foods

Acorns are scarce, and that means black bears may behave differently, Virginia’s forest and game experts said. Most of the oak trees that produce acorns are taking the year off in Virginia and neighboring states, forestry officials have said on their websites.

Bears depend heavily on acorns for food since red and white oak trees that produce those nuts dominate mountain forests. Bears and other wildlife can turn to alternate foods, or mast, such as berries and hickory nuts, which grew abundantly this year. Also, frequently, they turn to bird feeders, trash cans, dumpsters — dog food too, if it’s left where they can sniff it, even in urban areas. Police routinely confirm reports of bears venturing into human habitats, such as a family that included cubs, which roamed Lee’s Trailer Park in Madison Heights in September. Another bear was seen crossing the road onto Lynchburg College’s campus two weeks later. Humans actually harm bears if food or garbage is left where bears can reach them, wildlife experts say. A bear’s lifetime, typically 12 to 15 years, can be cut in half if it has access to human-style foods, according to the National Forest Service. It also is against the law to feed bears in Virginia.

Acorns typically provide about half the forage consumed by bear, deer, and turkey. As a result of the acorn shortage, the roaming range of bears can double or even quadruple, according to the Virginia Department of Game and Inland Fisheries. Also, bears may go into hibernation earlier. Bear cub survival tends to decline in years with mast failures, said Gary Norman, of Virginia’s Department of Game and Inland Fisheries.

There’s no single explanation for the lack of acorns this year, said Jerre Creighton, of the Virginia Department of Forestry. Possibilities include a natural cycle in which oak trees may be resting after producing a bumper crop of acorns in 2012, he said. Also, many of the oaks’ flower buds died before they could be pollinated last spring, he said — possibly due to late-spring freezes or high humidity from abundant spring rains. “We experienced both of these over much of Virginia,” Creighton said in a news release.

To read the full release click here.
Posted by David R. Jackson at 12:28 PM No comments:

Conserving the Hemlocks of the High Allegheny Plateau

The Nature Conservancy has partnered with the US Forest Service on a long term study to identify the most critically important hemlock forests in northwestern PA and western NY.  As most of you are already aware, hemlocks are threatened by an introduced, invasive insect called the hemlock wooly adelgid (HWA).  Hemlocks, the state tree of Pennsylvania, are important for a variety of reasons. They provide important ecosystem services such as clean water, fish and wildlife habitat, and host a diversity of fungi and insect communities.

This new study plans to use existing data to develop a technique to prioritize hemlock forests that are most at-risk and have the highest conservation value.  These results will provide landowners and managers with the tools necessary to identify where to deploy limited dollars and resources.  The tool will help identify priority areas for monitoring and treatment.

At this time, an interactive, web-based GIS tool has been developed.  The tool allows maps of infestation risk and conservation priorities to be dynamic, adaptable, and up to date.  To go to the web maps home page click here.  To view the map, click the OPEN button below the map icon, and select the option to 'Open in ArcGIS.com map viewer' (first option).  You can click on an area to get a pop-up window to display.  The windows have a lot of information on the attributes of each of the priority areas, including the acres of hemlock (including areas where hemlock is very sparse) in each and the average basal area of hemlock.

In the future, this web site will be a component of a website that will include other information about the initiative including collaboration, hemlock conservation, HWA, control measures, outreach, etc.  Development of that website will occur over the next several months, in conjunction with the formation of a Cooperative Forest Pest Management Area for the High Allegheny Plateau.  Further refinements to these areas, and the inclusion of further data, will continue to occur as new information is provided.

To view and article that appeared in the Society of American Foresters, The Forestry Source, November 2013, Vol. 18, No. 11 click here.

Special thanks to Sarah Johnson, Conservation GIS Analyst, The Nature Conservancy, for heading up this project and providing much of this material.
Posted by David R. Jackson at 5:35 PM No comments: 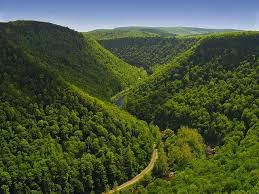 Wanted to provide an update on a publication released by the US Forest Service Inventory and Analysis section on the status of Pennsylvania's Forests.  A recent report entitled Pennsylvania’s Forests (2009 data) provides useful insights into the health and condition of the state’s woodlands.  In the past, statewide forest inventories conducted by the US Forest Service were periodic -- every 10 to 15 years. Starting in 2004 the data are collected annually and reported on a five year cycle.

Pennsylvania’s forest land area is stable, with some parts of the state gaining while others are losing forest cover. This has been the case since the mid-1960s.  Land use patterns suggest the forest land area stability is a function of offsetting of development in the southern tier as agriculture declines in the northern tier counties. The amount of forest cover has relatively constant at about 59 percent or about 16.7 million acres.

Most of this forest land, about 71 percent, is held privately by individuals, families, partnerships, and other entities not in the business of harvesting and using trees.  A recent Penn State study estimated there are 738,000 individual private ownerships in the state. Most of these ownerships are small parcels.  About 420,000 of these ownerships are smaller than 10 acres, and about 25 percent of the private forest is in ownerships of less than 20 acres. Statewide there are only about 25,000 privately owned forest tracts larger than 100 acres in size.

From a removal perspective, Pennsylvania is still growing more wood than it uses. Forest industry harvests trees for many uses and it is a major part of the state’s rural economy. The 2009 data finds that the growth to remove ratio is 2:1 for timberland – the forest is growing twice as much than is harvested.

The report conveys concerns about potential impacts from non-native insects and diseases that are increasingly affecting forests. Among these are gypsy moth, hemlock wooly adelgid, emerald ash borer, Asian long-horned beetle, thousand cankers disease, sudden oak death, and the list goes on. Added to this are the rapid invasion and expansion of non-native exotic plants that are filling our old fields and woodlands with aggressive competitors.

A truly problematic concern is the continuing failure to establish adequate tree regeneration (the next generation of trees) in woodlands disturbed by harvesting and other events. Using guidelines developed by the USDA Forest Research Lab near Warren, Pennsylvania, the 2009 inventory assessed adequacy of tree regeneration. When there was canopy disturbance sufficient to initiate and sustain seedling growth and development, only four of ten acres had sufficient desirable regeneration to replace the overstory.