UNIVERSITY PARK, Pa, — The recent announcement by the Pennsylvania Game Commission that it found 25 more wild deer with chronic wasting disease last year underlines the importance of studies being conducted by a team of researchers in Penn State's College of Agricultural Sciences.

With the overarching goal of determining how the always-fatal-to-cervids disease will disburse through the state's free-ranging white-tailed deer herd, the research is aimed at informing the commission's efforts to slow or limit the spread of the disease, according to David Walter, adjunct assistant professor of wildlife ecology.

Often referred to as CWD, chronic wasting disease infects the brain and nervous system of cervids. The illness, which belongs to a group of diseases known as transmissible spongiform encephalopathies, or prion diseases, eventually produces enough damage to the brains of affected animals to result in death. While CWD is similar to so-called mad cow disease in cattle and scrapie in sheep, there is no known relationship between them.

There is no strong evidence, either, that humans can contract CWD, according to the U.S. Centers for Disease Control and Prevention, although the disease is similar to Creutzfeldt-Jakob disease, a rare, fatal syndrome that afflicts people.

Walter, who is assistant unit leader of the Pennsylvania Cooperative Fish and Wildlife Research Unit at Penn State, conducted research from 2007 to 2011 on the spread of the disease in Colorado and Nebraska in free-ranging mule deer and white-tailed deer. Since coming to Penn State in 2012, he has concentrated on the CWD outbreak spreading through deer herds in Virginia, West Virginia, Maryland and Pennsylvania.

Working under Walter's guidance in 2013-14, master's degree student Tyler Evans, now a wildlife biologist with the West Virginia Department of Natural Resources, investigated the geographic coordinates where deer testing positive for CWD were found, and he modeled the likely future spread of the disease in Pennsylvania.
"That research looked at what environmental variables were associated with the presence or absence of chronic wasting disease in the Northeast," Walter said. "We obtained the geographic coordinates of hunter-killed deer that tested positive for CWD and overlaid them on a map showing a variety of habitat and landscape features. The analysis showed a high prevalence of CWD in deer sampled from low-lying open and developed landscapes."

Now, Walter's advisee Will Miller, a doctoral degree candidate in the Intercollege Graduate Degree Program in Ecology, is continuing to study the spread of CWD in Pennsylvania. But he is focusing on whether some deer might be susceptible to the disease because of their genes, and how genetic variation in deer might influence where and how fast the disease spreads.

"It appears that deer in Pennsylvania's Northern Tier are less related to those in Maryland and in southern Pennsylvania," Walter said. "That may well have implications for how CWD spreads."

Walter and Miller are slated to travel to Edinburgh, Scotland, in late May to attend an international conference focused on prions and diseases the mysterious proteins cause. At the conference, Miller will present findings of his research focusing on genetic susceptibility of some deer in Pennsylvania to chronic wasting disease.

Detected in captive and free-ranging deer and elk in 23 states and two Canadian provinces, CWD was found last year in reindeer in Norway, Walter pointed out. "The Europeans are eager to learn what we know about the disease, based on our experience in North America," he said. "But despite all that we are learning about the disease, there is much we still don't know."

In the case of the outbreak in Pennsylvania's wild deer, that includes how the disease infected free-ranging deer in Pennsylvania. Among the possible sources, two include captive deer and wild deer moving from Maryland. Although researchers have seen evidence that deer may carry the disease over the border with Maryland, the Pennsylvania counties of Blair and Bedford, where CWD originally was found in 2012, also had the highest inventories of captive cervids in Pennsylvania.
The location of the original outbreak, which was more than 40 miles from the Maryland border, makes it difficult to confirm the actual source of infection.

"In southern Fulton and Bedford counties, we have seen more CWD-positive deer along the border," Walter said. "We have seen over time that it is likely the disease is moving into this area from the West Virginia-Maryland outbreak."

The Game Commission tests both hunter-killed deer and animals killed on highways in parts of the state for CWD to assess the dimensions of the outbreak, Walter noted. The dual approach addresses sampling bias built into testing hunter harvests.

Because hunters are restricted by antler regulations from killing young male deer, and they mostly pass on taking young females and button bucks, some reached the mistaken conclusion that the disease primarily infects older deer. But road kills show that is not the case, Walter explained.

"It is a chronic disease, so it takes a while for the animal to succumb, but there is a fallacy out there that young deer can't get it — but they do, and we are detecting it now. Wisconsin has found CWD in fawns," he said.

"Most of the road kills with CWD are yearling males and females. We don't see that in hunter harvests, so our data from across the country has been skewed. Collecting and testing road kills has been a great investment of resources, and it has proved to be very valuable in finding this disease in areas we wouldn't find it otherwise."

Chronic wasting disease is not established in Pennsylvania yet, the way it is in Wisconsin and West Virginia, Walter believes, and he would like to see the Game Commission and state Department of Agriculture take steps, such as targeted culling of deer in CWD hotspots, to keep it at bay.

A colleague of mine sent me the link to this article.  I know it is close to a year old but it was quite fascinating to read.  I hope you find it the same.
Visiting physician sheds new light on Lyme disease
From MyTimes.com
By Barry Stringfellow
July 13, 2016

This past Friday, Dr. Nevena Zubcevik, attending physician at Harvard Medical School and co-director of Dean Center for Tick Borne Illness at Spaulding Rehabilitation Hospital in Charlestown (SRH) traveled to one of the nation’s front lines in the public health battle against Lyme disease to speak to a group of Martha’s Vineyard Hospital physicians. “I wanted to do this presentation by Skype because of all the ticks you have here,” she joked.

Dr. Zubcevik was at Martha’s Vineyard Hospital (MVH) to speak at grand rounds, a weekly meeting of clinicians, which on this day was open to the public, resulting in an overflow crowd at the Community Room just off the hospital lobby.

Over the course of the hour, she shared the most recent findings that she and her colleagues have made on the diagnosis and treatment of Lyme disease, in particular on the 10 to 15 percent of patients who suffer long-term symptoms, defined by Centers for Disease Control (CDC) as post-treatment Lyme disease syndrome (PTLDS). She discussed the protean nature of tick-borne diseases, the importance of public awareness, and the urgent need for the medical community to step up its game.

“Graduating medical students and doctors really aren’t educated about the gravity of this epidemic,” she said. “There’s a gap there that needs to be filled. We’re all responsible to educate our young doctors about what this entails.”

Dr. Zubcevic said the recent revelation that actor, singer, and songwriter Kris Kristofferson was cured of dementia once he was properly diagnosed with Lyme disease should be a lesson for medical professionals on how pervasive the disease is, and how often it is overlooked. “Sudden-onset dementia should really be a red flag for Lyme [disease], especially in people with compromised immune systems,” she said. “Everyone over 50 has a compromised immune system.”


To read the rest of the story click here.

For more on Lyme Disease from Penn State click here.

Posted by David R. Jackson at 1:53 PM No comments: 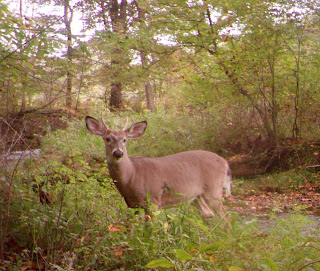 They have carefully monitored deer populations, biological diversity, and forest growth in this area. Hopes are, the study will lead to a better understanding of the complex relationships between deer and forests. Please join the Mifflin Perry Woodland Owner Association as we tour a few of the permanent monitoring plots as some of the researchers explain their findings.

The tour will consist of a 10 minute walk on an easy to moderately difficult trail that will lead us to a monitoring plot. Please where appropriate clothing and footwear for this short hike. This is a rain or shine program.

The program will start promptly at 6:00 pm from a parking area along Coopers Gap Rd near Reedsville, PA. This parking lot is just east of the Conklin Road and Coopers Gap intersection and if coming from the south travel approximately 2.6 miles northwest from the corner of East Back Mountain Road and Coopers Gap Road. Since our meeting location doesn’t have an address we also are meeting attendees at the Arby’s Restaurant parking lot located at 20 Commerce Dr, Milroy, PA 17063 at 5:15 and promptly leaving at 5:30 to lead attendees to the Coopers Gap Parking Area.

For more information about the Deer Forest Study click here.

Posted by David R. Jackson at 5:56 PM No comments: 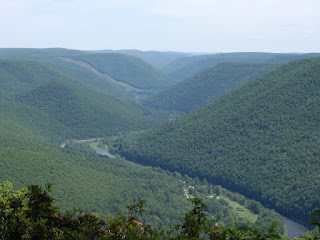 Hey All! See all that tall green stuff whizzing by your window as you drive through our state? All that is Penn’s Woods! Did you know it’s working for you? Would you like a personal introduction?

As the fall season arrives, the first Sunday in October this year will feature mentored woods walks across the state, providing entrée to land that is not always open to the public along with easy access to expert forest and wildlife professionals. A Walk in Penn’s Woods event may showcase management for wildlife or watersheds, exhibit the results of harvesting or planting, demonstrate the impacts of urban tree cover, showcase riparian buffers, offer children’s activities, or reveal the fascinating workings of a local sawmill. You’ll be able to find information about each individual walk at www.WalkinPennsWoods.org, as well as offer to host a walk. We are constantly updating this site as new events are planned and offered.

Walk in Penn’s Woods has wonderful statewide partners: all the venues and the resource professionals have volunteered their time and land. But we need your help to make everyone’s introduction to Penn’s Woods a huge success! With your contributions, we’ll be able to:

Visit our crowdfunding site (http://c-fund.us/b24) and help us make this happen!
Please help us get the word out.  Make a contribution. Share our posts with your contact list. And Save the Date, Walk in Penn’s Woods is October 1, 2017. We want to walk with you!
Posted by David R. Jackson at 9:10 AM No comments: