Learning Among Forest Landowners and Professionals 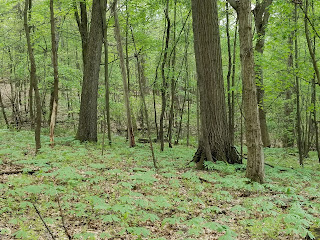 Join us for this interactive webinar, presented in partnership with Penn State Extension, PA DCNR William Penn State Forest District, and the Brandywine Conservancy. It will explore some of the common perceptions (both true and false) held by Pennsylvania's private forest (woodland) landowners. Statements commonly made by landowners about their woods, wildlife, forest pests, timber management, and the intersection between forest management and conservation easement protections will be used to facilitate sharing and learning. Using a collaborative learning approach, the presenters will ask participants what they think about several statements presented to them. Participants will be encouraged to write in their responses and share personal thoughts and experiences during the webinar. The presenters will then respond and share their own comments and knowledge. Questions and further discussion will be encouraged after each statement is covered.

The webinar will be presented on Thursday, May 13th from 7:00 - 8:30 PM (EDT) online via Zoom. Pre-registration is required.  You can register here.

Posted by David R. Jackson at 4:04 PM No comments:


Almost all North American bats rely on forests for survival. Individual forest landowners can play a large role in supporting these important animals, and a new publication authored by the White-nose Syndrome Response Team offers guidance on how.

Posted by David R. Jackson at 5:46 PM No comments:

Basal bark herbicide applications are targeted treatments you can make year-round yet are particularly effective and simple to apply in spring. Most common invasive shrub species are easily controlled with these applications. They include Japanese barberry, shrub honeysuckles, autumn olive, multiflora rose, privet, and many others. These species are common invaders of woodlands and natural areas across the mid-Atlantic region.

Most invasive shrubs tend to leaf out early in the spring, well before our native tree and shrub species do and before most perennial plants have emerged from the ground. By leafing our early, they can be easily spotted by scanning across the woodland understory or an early successional meadow. This characteristic makes them easy to find and identify as invasive thus allowing you to identify where these invaders are located.

Basal bark herbicide applications permit you to be very specific and targeted in your control efforts. This application allows you to place the herbicide directly onto the stems of the invasive shrubs when native trees and shrubs are still dormant. In addition, because most perennial plants have not emerged yet, applications to lower stems can be made very easily and efficiently. Making applications this time of year greatly minimizes the possibility of damaging desirable native plant species.

Basal bark herbicide applications are made using a low-pressure backpack sprayer to wet the lower 12–15 inches of the stem using a solid cone or flat fan nozzle. To be effective, it is important to wet the entire stem, root collar area, and any exposed roots. Basal bark herbicides use an oil carrier (commercially available basal oil, diesel fuel, no. 1 or no. 2 fuel oil, or kerosene) to penetrate the bark. Commercially available basal oils come in either mineral or vegetable-based formulations.

To make basal bark herbicide applications there are a few pieces of equipment you will need, including a backpack sprayer; my preference is a Birchmeier backpack. Birchmeier’s are a commercial grade backpack with viton seals that will hold up to oil-based formulations. The wand that comes with the sprayer will work but I would suggest changing the nozzle to a Y1 or Y-2 brass adjustable cone. If making basal bark applications to large acreage you may also want to consider investing in the B & G Extenda-Ban low-volume basal wand. This wand in a commercial grade wand with a shut off valve built into the tip. This prevents over-applying and dripping product from target to target. It will save you money in the long run.

Numerous products are labeled for basal bark applications. The ester formulation of triclopyr is the active ingredient of choice for woodland applications. It is found in a number of different products and in ready to use formulations. The herbicide is mixed with basal oil at a 20% rate for low-volume applications. This means each gallon solution will contain a mixture of 20% herbicide and 80% basal oil. Note, this is the low-volume application rate where you are applying a concentrated solution to the stem but NOT to the point where run-off at the groundline is noticeable.


Triclopyr ester formulations are general use herbicides, meaning in Pennsylvania they can be purchased and applied by the landowner to their own property. They contain 61.6% triclopyr-ester active ingredient unless using a ready-to-use formulation, which are only 13.6% active ingredient. Triclopyr ester is a systemic herbicide absorbed by the plant through the bark and translocated throughout the plants vascular system.

Triclopyr works by disturbing plant growth. It accumulates in plant meristems, cells where growth takes place, causing uneven cell division and growth. Triclopyr binds to soil organic matter and clay particles, which limits its movement in the soil and prevents root uptake by desirable plants. It biodegrades quickly with half the active ingredient degraded by soil microorganisms and sunlight within 30–45 days. The herbicide is classified as only slightly toxic with a CAUTION signal word on the product label.

Basal bark herbicide treatments allow for targeted invasive shrub control in spring with little danger of off-site and nontarget species damage. They are well suited for treating small-diameter stems. Basal bark herbicide applications provide year-round application flexibility but are particularly effect at controlling invasive shrubs in spring when they are just starting to leaf out. Triclopyr ester herbicides control a wide range of species including the most problematic invasive shrubs. It is a general use herbicide, meaning landowners can purchase and apply it to their own properties without certification in Pennsylvania. Be sure to read and follow the herbicide label, it is a legal document.

Posted by David R. Jackson at 9:58 AM No comments: