A Call for Support / Transgenic Chestnut

I thought it important to share this with my readers.

Many of you are probably at least vaguely aware of the expectation that American chestnut will be saved from virtual extinction by the work of The American Chestnut Foundation (TACF), a program of backcross breeding to introduce Chinese alleles for blight resistance into the genome of the American chestmut (Castanea dentata).

This work began in 1983 and followed 60 years of failed breeding efforts by USDA and others. TACF became the “little engine that could,” a small non-profit that has managed to leverage tens of millions of dollars in philanthropy, volunteer labor, scientific collaborations, and state and federal funding toward a goal that had been abandoned as impractical by the 1970s.

Saving American chestnut has always been a goal with wide public appeal – rescuing a cherished element of our natural and cultural history that went missing a century ago. This inspirational goal, combined with confidence that TACF’s science-based program of R&D will succeed, is the leverage that sustains support for the work of the organization. It’s a fragile arrangement, like many worthwhile things, and before success is achieved it will have to be sustained by 50+ years of confidence and enthusiasm from people who themselves may never see the goal realized.

Progress with the breeding program is slower than expected because there are more genes involved in Chinese resistance than originally believed. This work will continue, but attention has broadened to include a transgenic American chestnut created by Bill Powell and Chuck Maynard at SUNY-ESF, the culmination of 30 years of difficult work supported by the NY Chapter of TACF. With legal guidance provided by TACF, SUNY-ESF has applied to USDA-APHIS for permission to use the transgenic tree in restoring American chestnut.

The public comment period on the application to USDA-APHIS ends October 19, and I urge my readers to submit a comment. Commentary from both lay persons and scientists is an important consideration in the approval process.

Here are links to the pertinent information:

2.       Using Science to Save the American Chestnut Tree

This single-gene addition to American chestnut is an ecologically safe modification, and there is no commercial interest in obtaining USDA-APHIS approval for use. This is purely a conservation effort for the best of purposes, to restore a keystone species to its original habitat.

If the application is approved, followed by approvals from EPA and FDA, then many more years will be required to move the gene into diverse, regionally adapted populations for restoration. While that is underway, the original breeding program will continue, and TACF will pursue efforts to identify Chinese resistance genes that could be used for cisgenic transformations.

The rescue of American chestnut is a marathon, and SUNY’s transgenic is simply one more step and not necessarily a complete solution. But for reasons both technical and otherwise, I believe that approval of the transgenic is likely to be critical to the success of TACF’s mission. Moreover, if anti-science arguments can prevent this innocuous application of genetic engineering, then the future is grim not only for American chestnut but also for many other plant species under assault by introduced diseases and insects. When a plant has essentially no native resistance to an introduced pest, then genetic modification can well be the only means of saving it.

Kim C. Steiner | Professor of Forest Biology, Department of Ecosystem Science and Management, and Director, The Arboretum at Penn State

Posted by David R. Jackson at 5:45 PM No comments: 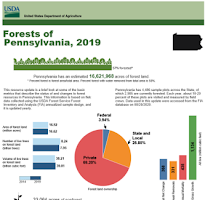 The USDA Forest Service's Forest Inventory and Analysis (FIA) program continually produces vast amounts of data on the extent, conditions, trends, and ownership status of the forest resources of the United States. The program supplies annual updates that provide a brief overview of forest resources in each state based on an inventory conducted by the FIA program in cooperation with each State forestry agency. Now you can easily access some of this information through an interactive website that offers fact Sheets for each state.
Posted by David R. Jackson at 12:40 PM No comments:

What is a Carbon Neutral Fuel?

The Hardwoods exhibit featured seven educational displays, all pertaining to how implementing sustainable forestry practices and the use of hardwood products can help reduce one’s carbon footprint. This is the third in a series of seven articles. These articles will provide information pertaining to each of the seven themes that were displayed. One article will be provided monthly.

Article 3: What is a Carbon Neutral Fuel?

By Jonathan Geyer and Dave Jackson

A carbon neutral fuel is one that does not increase the amount of carbon dioxide (CO2) cycling through the atmosphere. For example, burning wood is considered carbon neutral. When burned, it does not increase the amount of CO2 in the atmosphere. This is because the forest carbon cycle is a closed loop system (Figure 1). As trees grow, they photosynthesize, taking in carbon dioxide, converting the carbon into woody biomass and releasing the oxygen. Removing carbon from the atmosphere and storing it is known as carbon sequestration. The carbon stored in wood is released back into the atmosphere when the wood is combusted. However, new carbon is sequestered by other trees as they grow, and the cycle continues.

Wood-based fuel like firewood and wood pellets release a minimal amount of carbon into the atmosphere compared to coal, oil, and natural gas. When fossil fuels are combusted enormous volumes of CO2 are released into the atmosphere, more than what trees can sequester. Fossil fuel combustion leads to large increases in the amount CO2 cycling through the atmosphere (Figure 2). Trees need CO2 to make food, however, too much CO2 in the atmosphere can lead to what we now call global climate change.

Trees are a renewable natural resource which means they will naturally regrow or be replaced within a person’s lifespan. For many years Pennsylvania’s forests have been growing more wood volume than is being harvested. A sustainably managed hardwood forest in Pennsylvania can be completely harvested and replaced on average every 80 years. At the opposite end of the spectrum are fossil fuels, such as coal, gas, and oil. They are nonrenewable natural resources. They cannot be readily replaced and will eventually be completely used up.

Carbon neutral fuels, like firewood and wood pellets, neither contribute to nor reduce the amount of carbon dioxide in the atmosphere. Using carbon neutral fuels can help prevent this from happening. The carbon released from burning firewood or pellets is absorbed by the subsequent crop of new trees, which will grow to be the next source of carbon-neutral fuel……and the cycle continues.

Posted by David R. Jackson at 5:19 PM No comments: