The American Forest Foundation (American Tree Farm System and Project Learning Tree) has produced a video that helps show the public some of the reasons America's family forests are important to us all. Family owned forests provide all Americans with valuable resources such as clean air, water, wildlife habitat, and wood products. The estate tax will be a threat to many family forests.

If the estate tax is not reformed before 2011, a 55 percent tax will be collected on all estates valued over $1 million, the levels of 2001. This will affect many family forest landowners, and may force some of them to sell their land or harvest their timber unsustainably to pay the tax debt. If the estate tax is not changed the threat of permanent loss of forests will increase.

Senators Dianne Feinstein (D-CA) and Mike Crapo (R-ID) introduced S. 3664, the Family Farm Estate Tax Deferral Act of 2010. This bill would remove the estate tax burden on family-owned forests, if the land stays in the family and is managed sustainably. S. 3664, would provide family forest owners with an exemption from the estate tax, if they keep the land in their family and manage it as a forest.

You may want to urge your Senators to act on the estate tax for family forest owners before time runs out and urge them to support S. 3664. Write to your Senators here. 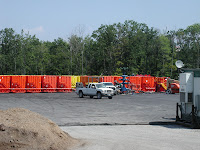 * About 60,000 new Marcellus wells are projected by 2030 in Pennsylvania with a range of 6,000 to 15,000 well pads, depending on the number of wells per pad;
* Wells are likely to be developed in at least 30 counties, with the greatest number concentrated in 15 southwestern, north central, and northeastern counties;
* Nearly two thirds of well pads are projected to be in forest areas, with forest clearing projected to range between 34,000 and 83,000 acres depending on the number of number of well pads that are developed. An additional range of 80,000 to 200,000 acres of forest interior habitat impacts are projected due to new forest edges created by well pads and associated infrastructure (roads, water impoundments);
* Impacts on forest interior breeding bird habitats vary with the range and population densities of the species;
* Watersheds with healthy eastern brook trout populations substantially overlap with projected Marcellus development sites;
* Nearly a third of the species tracked by the Pennsylvania Natural Heritage Program are found in areas projected to have a high probability of Marcellus well development;
* Marcellus gas development is projected to be extensive across Pennsylvania's 4.5 million acres of public lands, including State Parks, State Forests, and State Game Lands;
* Integration of conservation features into the planning and development of Marcellus gas well fields can significantly reduce impacts;
Posted by David R. Jackson at 5:05 PM No comments: 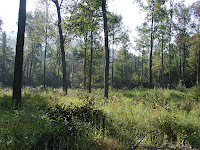 A follow-up story to my blog post from October 21, 2010 entiteld Forest landowners Encounter New Challenges appeared in the Portland Insight on November 4th (see below).  I thought I would share this with my readers.  Granted, this is written in Oregon, but again, the same applies for much of Pennsylvania.  We have more that half a million owners of forestland in the state.  Many of our owners are very concerend about proper land management, they seek out information and guidance from professionals, and they practice proper stewardship of the land.

Pennsylvania also runs a program entitled the Forest Stewarsdhip Program.  This program provides funding for landowners who wish to receive a forest managment plan.  This program is administered by the USDA Natural Resource Conservation Service with technical advice provided by the Bureau of Forestry (BOF).  For information on this program contact your BOF service forester.

Last month’s Sustainable Life story, “Tree farmers encounter new eco-challenges” (Oct. 14), could leave the reader wondering, “Why be a family forestland owner?” The story gloomily recounts that harvested lands sometimes aren’t replanted; that the timber sometimes is harvested and the land sold for development.  To read the full sory from the Portland Insight, November 4, 2010, click here.
Posted by David R. Jackson at 11:23 AM No comments: