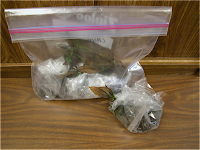 On Feb. 18, 2010 the Penn State Plant Disease Clinic received a sample of Laurus nobilis (actual sample photographed at left), known commonly as bay laurel, true laurel, sweet bay, laurel tree, Grecian laurel, or bay tree. The tips of the leaves submitted were dead or dying and it was reported by the grower that 95% of well rooted plants in 12 or so flats exhibited the symptoms. The United States Department of Agriculture-Animal Plant Health Inspection Service (USDA-APHIS) confirmed the plants to be infected with Phytophthora ramorum, the Sudden Oak Death pathogen known to occur in trees and shrubs on the west coast of the U.S. and in Europe. Phytophthora ramorum can infect many important ornamental trees and shrubs under the right conditions. There is a great deal of concern that this fungus-like organism could cause significant economic damage to eastern forests and landscapes if not excluded from the region.

The’ bay laurel’ submitted was not Umbelluiaria californica, the California bay or California bay laurel that grows on the west coast and is a major host of Phytophthora ramorum that then spreads to oaks. However, Laurus nobilis is known to be a host of Ph. ramorum.

SO WHAT YOU SAY!!
Phytophthora ramorum has, to date, been excluded from the eastern U.S. but this occurrence may indicate that the plant pathogen is now or will soon be in the region from multiple sources. In 2009, Laurus nobilis was named as the Herb of the Year by the International Herb Association (IHA). Laurus nobilis seed can be purchased from a number of sources including through Amazon.com. Web information indicates that the seed is difficult to germinate. It is my understanding that people have been encouraged to grow this plant and that it has been used in various Master Gardener projects. If seed or tissue associated with seed is actually the source of the pathogen, it is possible that Phytophthora ramorum has arrived in the east with seed purchased by backyard gardeners, etc. Where is the ‘failed to germinate’ material discarded? Where are plants with dying leaf tips discarded?

"It is VERY important to note that the P. ramorum was detected on a plant growing in a GREENHOUSE. There is NO EVIDENCE that Phytophthora ramorum is anywhere in the east outside that greenhouse. Certainly there is NO EVIDENCE THAT IT IS IN THE GENERAL ENVIRONMENT OR FOREST in the east. The reason for releasing the info was to remind us that P. ramorum COULD be brought to the east on plant material. The growing of Laurus by gardeners is being encouraged. Let's hope Laurus is not actually an important source of P. ramorum." Dr. Gary Morman, Professor of Plant Pathology, Penn State University
Posted by David R. Jackson at 5:33 PM 1 comment:

Came across this interesting article posted on Penn State Live March 22, 2010 about the relationships between deer and coyotes.  I also wanted to let everyone know that the PA Game Commission just released the deer harvest figures from the 2009-2010 hunting season.  They reported that a total of 308,920 deer were harvested in the state.  This represents an eight percent decline from the previous seasons’ harvest of 335,850.

Coyotes Not Decimating Deer Numbers According To Expert

University Park, Pa. -- It's a question that has captured the imagination of Keystone State deer hunters and wildlife lovers: Has increased predation on helpless deer fawns by an growing population of Eastern coyotes resulted in dwindling whitetail numbers across Pennsylvania's rugged northern reaches? The answer is no, according to a deer researcher in Penn State's College of Agricultural Sciences.


"It's a cruel world out there for wildlife," said Duane Diefenbach, adjunct professor of wildlife ecology and leader of the Pennsylvania Cooperative Fish and Wildlife Research Unit housed in the college's School of Forest Resources, "but it's no crueler in Pennsylvania than other states."

There is no question the coyote population has grown dramatically in the Northeast in recent decades, he said, and everyone agrees that coyotes do prey on fawns, "but our data tell us that coyote predation is not an issue in Pennsylvania."

If you are interested in reading the rest of the story click here.
Posted by David R. Jackson at 1:57 PM 3 comments:

This article appeared in the Friday, March 13, 2010 issue of Lancaster Farming.  I thought some of my readers might find it interesting.  It deals with the prospect of mandating a specific minimum width forested buffer on all strreams of the Commonwealth.  Currently, there is no specific buffer width required by law.

Forested Buffers Get a Hearing in the House

HARRISBURG, Pa. — When it comes to cleaning up the Chesapeake Bay, the discussion usually centers around a few solutions: getting wastewater treatment plants up to date and getting farmers to manage their nutrients better.

But at a meeting Monday at the Pennsylvania State Capitol, the discussion centered on something that often gets overlooked: trees.

The House Majority Policy Committee hosted the meeting, which included representatives from several environmental groups as well as the group representing the state’s building industry, the Pennsylvania Builders Association.

The talk centered on the importance of tree buffers in tributaries and whether or not the state should require minimum buffers along waterways.

Posted by David R. Jackson at 3:07 PM No comments: 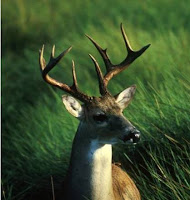 I realize this may be old news to some of you but I recently had an article sent to me highlighting some of this information.  I thought I would share it with my readers.  The Wildlife Management Institute, a non-political organization based in Washington, D.C, was contracted by the state to audit the Game Commission.  The findings were released Feb. 16 to the State Legislative Budget and Finance Committee.  You can view the entire report entitled "Deer Management Program of the Pennsylvania Game Commission a Comprehensive Review and Evaluation" by clicking here.

The Pittsburgh Post Gazette ran a nice article on Sunday, February 28, 2010 that summarizes some of the findings.  It begins as follows:

A recent 2010 Whitetail Report by Quality Deer Management Association ranked Pennsylvania's deer management program second behind Vermont among Northeast states. Biologists from other wildlife management agencies have been generally supportive and complimentary of Pennsylvania's ambitious plan.  And while the Wildlife Management Institute's recent audit was critical of parts of the plan, its authors found nothing fundamentally wrong with the program.

Click here to read the full story.
Posted by David R. Jackson at 3:20 PM No comments: 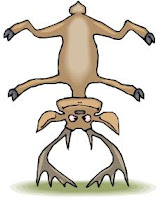 What does is really mean to “balance” the deer herd? Wildlife biologists use this terminology quite often. But how many of us really know just exactly what they are trying to accomplish, how we go about it, or how we know when we have gotten there. The natural resource educators from Penn State Cooperative Extension are offering a number of programs this spring that may help answer those questions.
Overabundant deer populations pose serious issues for many homeowners, agricultural producers, woodland owners, as well as the public at large. Safety issues such as Lyme disease and deer-vehicle collisions have impacted many people. A Maryland survey found that 1 in 6 citizens know someone who has experienced a deer-vehicle collision. Many agricultural producers suffer significant losses to deer. Homeowners suffer thousands of dollars in damage to their landscapes and deer have reduced the biodiversity of our woodlands by selectively browsing vegetation. Managing deer populations so they are in balance with the available habitat is essential.
To read the full story go to the Pennsylvania Forest Stewardship News release.
A web seminar will be offered by Penn State Extension may help answer some of your questions. The webinar is entitled Deer Habitat Management is offered on March 9 at noon and again at 7:00 PM. For webinar details and registration go to the PA Forests Web Seminar Center.
Penn State Extension Educators will also be offering a number of hands on workshops entitled “Deer Density and Carrying Capacity Workshops.” These workshops are designed for those interested in learning more about white-tailed deer biology and habitat. The workshop teaches how to evaluate a given habitat and how it relates to deer biology, numbers, and carrying capacity. For a listing of dates and locations go to the Penn State Natural Resources Extension Web Calendar.
Posted by David R. Jackson at 5:25 PM No comments: