Caretakers of the Forest 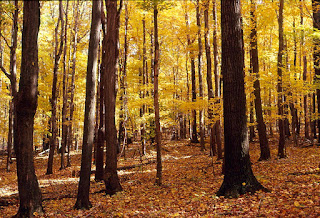 I wanted to share the link to the trailer for a public television documentary that tells the story of people, their forests, and the communities that support them.  It was produced by WPSU for the Penn State Center for Private Forests.  It is very well done.  Check it out.  You may find it motivational and in support of your own endeavors.

Posted by David R. Jackson at 3:58 PM No comments:

With the bitter cold forecasted for tonight I thought it would be fitting to share this article from the Weather Channel.  Interesting, every state has recorded below zero temperatures except for Hawaii!

The Coldest Temperatures Ever Recorded inAll 50 States
by Linda Lam 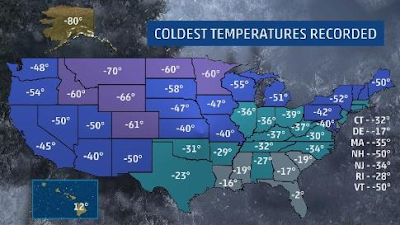 When winter approaches and the colder temperatures begin to take hold you may have wondered just how cold it can get in your state.

The map below indicates the coldest temperature ever recorded in all 50 states, according to the National Oceanic and Atmospheric Administration (NOAA).  When taking a close look at the data there are some surprises.

One of the most interesting facts is that every state in the continental U.S. has seen temperatures drop below zero.

The only state that has not seen a subzero temperature is Hawai'i. The coldest temperature recorded in Hawai'i is 12 degrees at the Mauna Kea Observatory, which is at an elevation of 13,796 feet, on May 17, 1979.

Of course, as expected, the coldest temperature in the U.S. was set in Alaska. The mercury plummeted to 80 degrees below zero on Jan. 23, 1971 in Prospect Creek in central Alaska, north of Fairbanks.

The coldest temperature recorded in the contiguous U.S. is 70 degrees below zero, measured at Rogers Pass, Montana, on Jan. 20, 1954.

The oldest record was set on Jan. 22, 1885 on Mount Washington, New Hampshire, the highest peak in the Northeast, when the thermometer dropped to 50 degrees below zero.

The most recent record on the list was set on Feb. 10, 2011 in Nowata, Oklahoma, when the temperature reached 31 degrees below zero.

Records in the South are colder than you might expect. South Carolina, Georgia, Mississippi and Louisiana all have dropped to the teens below zero, while Tennessee has seen the mercury plunge as low as 32 degrees below zero.

One interesting, but not unexpected, note about the Midwest is the difference in temperature records with states south of the Great Lakes to those near and northwest of the Great Lakes. Illinois, Indiana and Ohio all have records in the 30-degree below zero range, while Michigan, Wisconsin and Iowa have records that range from 45 to 55 degrees subzero.

In the West, elevation makes a difference, as does being in the interior. Rogers Pass, Montana, which holds the record for coldest temperature in the Lower 48, 70 degrees below zero, rises to an elevation of 5,610 feet above sea level and is located on the Continental Divide. In Arizona, the record of 40 degrees below zero was set at Hawley Lake at an elevation of 8,200 feet.
Posted by David R. Jackson at 4:56 PM No comments:

Trees are the answer, but what are the questions?

Have you ever seen this bumper sticker, “Trees Are the Answer?”  It was created by the Society of American Foresters.  Do you know what the questions are?  I came up with 10 and posted them below.


1.     What provides us with products and goods we depend on every day? Managed forests are a sustainable source of environmentally friendly wood and wood products….material to build and furnish homes and paper products.  Trees are renewable, recyclable, and biodegradable.
2.     What protects our rivers and streams and provides us with clean water?
Trees and forests reduce runoff, prevent erosion, filter pollutants, and cool waters with their shade.  Forested watersheds provide millions of people with fresh drinking water.
3.     What helps you save on your heating and cooling costs?
Trees provide shade in the summer and wind breaks in the winter, minimizing our heating and cooling costs.  Trees increase property values by 15% or more.
4.     What helps us address climate change and global warming?
Forests moderate global climate change by capturing and storing atmospheric carbon.  Planting and growing trees and using trees in durable products helps offset carbon emissions.
5.     What helps clean the air we breath?
Forests produce oxygen and help clean the air we breath.  To grow 1 pound of wood, a tree uses about 1.5 pounds of C02 and produces about 1 pound of 02.
6.     What can provide us with a clean, sustainable source of energy?
Woody biomass can provide us with a clean, renewable source of energy through direct combustion or through conversion to liquid fuels.
7.     What plays a vital part in our nation’s economy?
100’s of thousands are employed in forest related jobs providing billions of dollars to the nation’s economy.  The US Dept. of Labor estimates that there are more than 30,000 jobs just in forestry and conservation, many in rural areas and impacting local economies.
8.     What provides habitat for many species of wildlife?
Trees and forests of different ages provide many animal species with places to live.  Both managed and unmanaged forest ecosystems are vital for the survival of the animals that live there.  The diversity of animals found in the forest is only as diverse as the forest landscape itself.
9.     What provides many recreational opportunities?
Trees and forests make recreation more scenic and enjoyable, whether you’re into hiking, camping, and biking or bird watching and photography.
10.  What do we have as much of today as we did 100 years ago?
For the past 100 years, the amount of forestland in the US has remained relatively stable at around 755 million acres.


I believe Trees are the answer to all these questions.  That was just 10 questions.  Can anyone come up with any others?

Posted by David R. Jackson at 9:02 AM No comments: