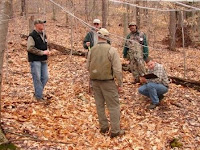 Musser Gap was conserved in 2007 to protect important water resources and wildlife habitat that was threatened by a residential development. The property was purchased by ClearWater Conservancy in partnership with the PA Department of Conservation and Natural Resources (DCNR), State College Borough Water Authority, the six Centre Region municipalities, and Altrusa International of Centre County. It is now owned by DCNR Bureau of Forestry and is part of Rothrock State Forest.
The Musser Gap Stewardship Committee was established in 2008 to create a Conservation Stewardship and Recreation Plan to guide the conservation and enhancement of the natural resources of Musser Gap while creating a recreational gateway between the community and Rothrock State Forest.
Volunteers are wanted to help conduct a deer density and browse impact survey in Musser Gap and surrounding properties on Friday, March 27th starting at 8:00 a.m. in the Ferguson Township Building. April 1 will be the snow date. Anyone interested in assisting with the data collection is encouraged to volunteer. Participants will learn how to calculate the deer density in a given forest setting; how to evaluate the condition of deer habitat and the level of deer browsing impact on tree seedlings; and how the condition of the habitat relates to deer numbers and habitat carrying capacity.
Dave Jackson, Forest Resource Educator with Penn State Cooperative Extension, will teach volunteers the survey protocol the morning of the survey. We will then travel to Musser Gap where groups of volunteers, led by experienced personnel, will assist in conducting the surveys on pre-established transect lines. Volunteers need to be prepared to hike in the woods for more than a mile over rough terrain. Following the field data collection, we will reconvene as a group to compile the results and discuss what we found. Data collected by the survey will be used to help guide habitat management in Musser Gap and will be shared with neighboring landowners.
The survey is being coordinated by Penn State Cooperative Extension, DCNR Bureau of Forestry, and ClearWater Conservancy.
Pre-registration is required by March 20, 2009. To volunteer please call ClearWater Conservancy at 237-0400 or email at Katie@clearwaterconservancy.org.
Posted by David R. Jackson at 9:25 AM No comments:

Abandoned Mine Drainage in the West Branch Watershed

Sponsored by the Woodland Owners of Centre County

In response to the nation’s current economic climate, environmental-related issues have taken a back-seat to domestic policy and unemployment. In fact, a January poll by the nonpartisan Pew Research Center cites that only 41% of voters deemed protecting the environment a top priority – down 15 points from last years’ 56%. While this precipitous drop is not surprising, it highlights the fact that environmental issues are not likely associated with job creation or increased local economic productivity.

Contrary to this evidence, Trout Unlimited recently published a study documenting the economic benefits associated with remediating local abandoned mine drainage pollution. The study reports that cleaning up the more than 1,200 miles of polluted waters and 42,000 acres of abandoned mine lands in the West Branch Susquehanna River watershed could potentially create approximately 6,000 green-collar jobs and an associated $800 million in economic benefits. The study also reports that streams free of abandoned mine drainage pollution would potentially generate $22.3 million in sport fishing revenue on an annual basis.
Posted by David R. Jackson at 9:35 PM No comments: 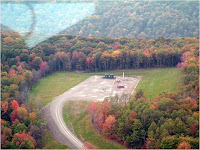 For landowner Jamie Ulrich, it started with a letter in the mail. Then there were a few phone calls, and one day last winter Ulrich found a note hanging from the doorknob of his Clearfield County farmhouse. The letters and calls were from gas and energy companies that wanted to lease Ulrich’s land to explore for underground natural gas. “I thought there was some mistake,” says Ulrich, who works for the Pennsylvania Department of Agriculture’s State Conservation Commission. “I didn’t think we were in typical gas country.”
In January 2008 Ulrich and his wife, Annie, were offered $50 an acre to lease their sixty-one-acre farm, and they considered signing. They talked to neighbors who were getting offers. After attending an extension workshop, the Ulrichs decided to hold out for a better offer. “I went to an extension workshop and heard Tom Murphy speak, and I was impressed,” he says. “Folks like Tom have been a tremendous help. They’ve seen the trends, they’ve been to Texas and seen what’s happened there with the Barnett shale, they have the facts.
“Back in May, our offer was $800 an acre, and I thought, okay, now it’s time to sign. I called Tom, and he said, ‘Jamie, I think that’s a little light. Right now time is your friend.’ He gave us courage to hang in there.” The Ulrichs bided their time, and on October 1 they signed a five-year lease for $1500 per acre with 15 percent royalties on any gas that is extracted from their property. “It was definitely worth it to educate ourselves and get clear, objective information from extension,” Ulrich says. “It’s been a stressful time, but following extension’s advice to be patient paid off for us.”
To read teh full story go to: http://naturalgas.extension.psu.edu/323.htm
Posted by David R. Jackson at 3:13 PM No comments: 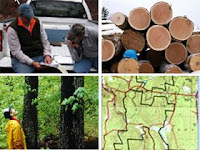 Timber harvesting is an important management tool for private forest landowners. With planning, it allows owners to meet many of their objectives. This seminar will cover the recommended steps owners should take in order to have a successful timber harvest. This seminar also counts towards 1.0 credit of Category 2 SAF CFE credits.
Live seminars are scheduled for the second Tuesday of every month at noon and 7 p.m., skipping July and August. Each session is recorded and loaded onto the Web Seminar Center along with a copy of the presentation and any handout materials. So, if you are unable to participate in the "live" session, a recording of it will be available for you to view at your convenience. Of course, none of the interactive elements will be available when watching the recording.
To participate in the live seminars you must register and have a "Friend of Penn State" user ID. The "Register Now" page on the website will walk you through this process. If you are a member of the Penn State community, you already have your User ID, but we would ask you to register on the website so that you can receive reminders of upcoming programs.
Participation in the web seminar does not require any special software. To view live and previously recorded seminars all you need is a high-speed Internet connection and sound. To register and take part in the live seminars or to view the upcoming seminars schedule, visit http://rnrext.cas.psu.edu/PAForestWeb/.
(Photo credit: Fountains Forestry)
Posted by David R. Jackson at 4:22 PM No comments: