This article covers the key characteristics on how to identify tree-of-heaven and distinguish it from a couple of common native look-alikes. From observations we have found that tree-of-heaven is one of the preferred hosts of the introduced spotted lanternfly. Interestingly enough, we have found this to be good news, as we are able to use this to our advantage to help control spotted lanternfly populations. Correct identification of the tree is essential since several native trees can be easily confused with tree-of-heaven.

The scientific name for tree-of-heaven is Ailanthus altissima.  Many people simply refer to it as Ailanthus. Some other common names include Chinese or stinking sumac. It is an invasive tree native to China, originally introduced to the Philadelphia area by an amateur gardener in 1784, more than 200 years ago. It was valued as a street and shade tree as it showed great tolerance to harsh urban environments. It also established easy, had rapid growth, and an absence of serious pests. It was widely planted in the Baltimore and Washington DC areas, even into the 20th century. However, enthusiasm soon waned after gardeners became familiar with its suckering habits and foul smelling odor.

Tree-of-heaven has become naturalized across much of the United States and now occurs in 42 states from Maine to Florida and west to California. It is very common in the mid-Atlantic and mid-west and is now found on the west coast where is was introduced by Chinese immigrants.

Tree-of-heaven has rapid growth and can grow into a very large tree, reaching heights of 80 to 100 feet and up to six feet in diameter. However, the species is also relatively short-lived and rarely survives more than 50 years.

The leaves of tree-of-heaven are pinnately compound, meaning they have a central stem, called a rachis, in which leaflets are attached on each side. One leaf can range in length from 1-4 feet with anywhere from 10 to 40 leaflets. The leaflets are long and narrow or what is referred to as “lance” shaped.

The margins, or edges, of each leaflet are smooth or “entire.” This simply means they do not have teeth or “serrations” along the edge of the leaflet. However, at the base of each leaflet you will find one to two protruding bumps on the margin. These are commonly referred to in the literature as glandular teeth. This is a great diagnostic characteristic to look for when trying to identify this tree during the growing season. In addition to the glandular teeth at the base of each leaflet, when crushed, the leaves and all plant parts give off a strong rancid smell similar to cat urine or burnt peanut butter.

The bark of tree-of-heaven is smooth and green when young, eventually turning light brown to gray. It resembles the skin of a cantaloupe when young, later turning darker gray and rough.

The twigs of tree-of-heaven are alternate on the tree. They are stout, greenish to brown in color with small lateral buds and lack a terminal bud at the end of the twig. They have large V or heart-shaped leaf scars. The leaf scar is the area exposed when the leaf falls from the stem.  Lateral buds are located at the top of each leaf scar, but not enclosed by the scar. The twigs can be easily broken to expose the large brown center, or pith. This is one of the trees most convincing identification feature. The pith is spongy in texture, and brown in color.  It also has a similar unpleasant odor as the crushed leaves.

Note however, a combination of features including branching pattern (opposite vs. alternate), leaf margin, bud, leaf scar, and bark (and possibly smell depending on the time of year) can be used to differentiate each. Recall, a pinnately compound leaf is a leaf with a central stem, called a rachis, with leaflets along each side. A pinnate leaf can have either an odd or even number of leaflets contained on the leaf.  Tree-of-heaven typically have an even number of leaflets.

For this article we are going to focus in on just two of these native look-alikes; staghorn sumac and black walnut. Both of which appear to be preferred hosts for spotted lanternfly. Sumac is probably the most likely species to be confused with tree-of-heaven. After all, one of the common names for tree-of-heaven is Chinese sumac. Again though, leaf margin, twigs, leaf scars, and fruit (and possibly smell) are easy to use to separate the species.

Staghorn sumac also has stout, brown twigs covered with fuzz, resembling a deer’s antlers in velvet. Of course, this is the characteristic that gives the tree its common name of “staghorn” sumac. The bark of staghorn sumac remains fuzzy for several years ultimately turning gray-brown and smooth with numerous horizontal marks, called lenticels. It becomes a bit scaly later in life as stems mature.

Black Walnut
The leaf of black walnut is also pinnately compound, 12 to 24 inches long, with a stout rachis that is somewhat pubescent, or hairy. The terminal leaflet is often missing or poorly formed. Similar to staghorn sumac, the leaflets of walnut are also finely toothed, or serrated. Most are familiar with the fruit of walnut, it is a round nut covered with a green husk that quickly turns black once it drops from the tree.

The twigs of black walnut are stout and light brown in color. The leaf scars are one of the distinguishing characteristics as they are 3-lobed and resemble a "monkey face." The center of the twig, called the pith, on walnut is also a distinguishing characteristic of the tree. The pith is divided into chambers, referred to as a “chambered” pith. By comparison, the bark of black walnut is much darker and rough; ridged and furrowed with a rough diamond pattern.

Summary
To summarize, we will briefly cover the key characteristics used to distinguish tree-of-heaven from staghorn sumac and black walnut. We will start with the leaves.  All three have pinnately compound leaves containing a central rachis with multiple leaflets. Tree of heaven leaves are typically much longer, reaching lengths of 3-4 feet. The margin of the leaves on tree-of-heaven are smooth containing just 1-to-2 teeth at the base of each leaflet while the leaf margins of both sumac and walnut are toothed, or serrated. When crushed, the leaves of tree-of-heaven give off a strong offensive odor. The twigs of tree-of-heaven are stout and hairless with large v or heart-shaped leaf scars, and contain a spongy brown center, or pith. The twigs of staghorn sumac are fuzzy, similar to deer antlers in velvet; while black walnut twigs are much less stout with leaf scars that resemble a “monkey face.” They also contain a chambered center, or pith. Lastly, the bark of tree-of heaven resembles a cantaloupe; staghorn sumac bark is smooth with horizontal lenticels; and black walnut bark is ridged and furrowed with a rough diamond pattern.

Tree of Heaven Fact Sheet
Identifying Tree of Heaven and Some Native Look-alikes Video
Posted by David R. Jackson at 11:57 AM No comments: 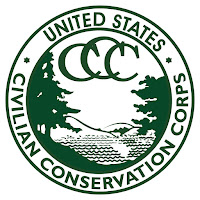 If you are interested in history you will enjoy this one,  the Centre County Historical Society put together a recorded podcast about the Civilian Conservation Corps, specifically Poe Valley camp.  Check it out.
https://soundcloud.com/user-115246989/episode-7-ccc-in-centre-county
Posted by David R. Jackson at 9:46 AM No comments: