Justification for Controlling Tree of Heaven 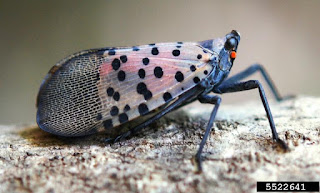 Lycorma delicatula, commonly known as the Spotted Lanternfly (SLF), is a new invasive insect that has spread throughout southeastern Pennsylvania since its discovery in Berks County in 2014. SLF presents a significant threat to Pennsylvania agriculture, including the grape, tree-fruit, hardwood and nursery industries, which collectively are worth nearly $18 billion to the state's economy.
Penn State Extension Resources
PA Department of Agriculture Resources

Then the good news: 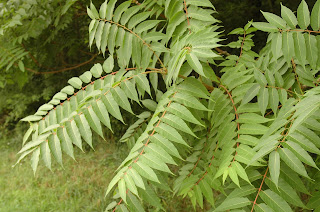 We should not be leaving the response to this problem to government alone. Landowners need to destroy the invasive exotic ailanthus tree, also known as the tree of heaven. Although SLF will feed on other trees and plants, all life stages strongly prefer tree of heaven, and adult SLF seem to require a meal from these trees prior to laying eggs, although this has not been proven yet through research. This provides an opportunity to concentrate the SLF population on a property by performing host tree reduction. This method involves removal or killing most tree of heaven on an infested property while leaving a few to serve as trap trees. Trap trees are treated with an insecticide which controls the insect once it feeds on the tree.
Tree of Heaven Control Methods
Guidelines for the Control of Spotted Lanternfly

While waiting for federal, state, and local agency responses, this is an opportunity to mobilize citizen science to detect and help us contain the infestation. Take advantage of the relative ease of recognition of both the pest and Ailanthus at all stages. Engage school science teachers at all levels in teaching recognition and reporting. Engage garden clubs, friends of parks groups, churches, neighborhood associations, and civic organizations, as well as landscapers and nursery employees, in getting the word out. We need as many eyeballs as possible looking for this pest and keeping it contained. Treat it as a regional issue and coordinate among mid-Atlantic states, not just as Pennsylvania’s problem.

Wolf signed an executive order expanding the Governor’s Invasive Species Council to bring additional expertise and resources to bear in the battle against new invasive species, such as the spotted lanternfly. The council will expand from 10 to 14 members to pave the way for adding representatives of county and municipal governments, conservation districts and the transportation sector. State Agriculture Secretary Russell Redding will continue to serve as the council’s chairman.

People in areas that haven't seen the pest in the past should report lanternfly sightings to state agriculture officials. 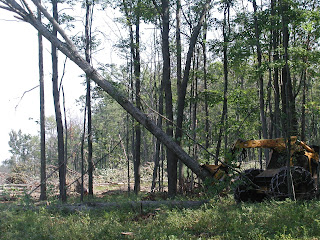 NC State Extension Specialist and Professor of Forestry, Robert Bardon, has prepared an excellent resource for landowners interested in selling timber.  I wanted to share this with my readers.  I provided the introduction and link to the page below.  Give it a read if you plan to sell timber in the near future.

I have also used the below resource for educating folks on the timber sale process as well.  It was produced by the University of Wisconsin and the Wisconsin DNR and is also very well written.
Conducting a Successful Timber Sale

Learning from experience can be very expensive when it comes to timber sales, many of which are once- or twice-in-a-lifetime occurrences. Years of growth and value are accumulated in a mature timber stand, and the combined annual income from all those years is frequently marketed in a single transaction. When and how you sell your timber can influence how much money you make, your overall financial plans, the cost of forest regeneration, and other management objectives.

Too much is at stake for you to sell timber without an understanding of the markets and of the quality and quantity of your timber. There are no daily market price reports for standing timber (stumpage), nor are there any government support prices. Demand and price for many timber products fluctuate widely. Size, quality, and species of timber are also highly variable. Specialized knowledge is required to identify tree species and to estimate volume and value within standards accepted by local markets.

This publication offers tips on marketing and selling, timber terminology, examples of timber sale agreements, and advice on seeking professional help from a consulting forester. By using this information, you can make your next (or first) timber sale both a pleasant and a profitable experience.

Click the below link for full publication.
TimberSales: A Planning Guide for Landowners

Posted by David R. Jackson at 9:23 AM No comments: