Is Overharvesting a Threat to Our Forest?


Recently, there have been a number of news stories published related to the growth of the biomass industry, particularly in the South. These articles often tell just one side of the story. They describe a narrow and inaccurate view of the threats to family-owned forests.

In an op-ed published this week in “The Hill” entitled "Top Threats to Forests do not Include Over-harvesting", the American Forest Foundation shared a different story, the real story of forest landowners. They point out the most significant challenges Tree Farmers face are development pressures, catastrophic wildfire, invasive plants, insects and disease. Ironically, these threats can all be addressed by increased markets for sustainable wood. With increased markets woodland owners are able to finance practices that create forest resiliency.

I hope you will take the time to read this article and consider sharing your story as well. The American Forest Foundation is always looking for forest landowners/Tree Farmers who actively manage their land to ensure forests remain as forests, in particular, working forests remain as working forests. If interested in sharing your story as part of their communications efforts, please email info@forestfoundation.org to learn more.

How Europe's Climate Policies Led to More U.S. Trees Being Cut Down (Washington Post)
UK Biomass Industry Must Show Fuel is Sustainable (1Sun4All.com)
Posted by David R. Jackson at 10:06 AM No comments: 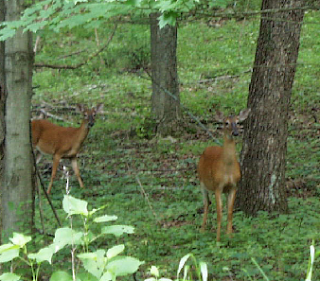 Back in October of 2013 I first reported on a new deer forest study being launched by Pennsylvania's Cooperative Fish and Wildlife Research Unit. This research will help Pennsylvania’s forest and game managers better understand how deer affect forests so they can make better management decisions.

Deer-Forest Blog:
To keep up on the study findings check out their blog. posts are made periodically with some very informative findings. The first post was made to the blog in June 2013 and the latest being today. Today's post was entitled "So Why Did the Deer Cross the Road?" http://ecosystems.psu.edu/research/projects/deer/news/2015/so-why-did-the-deer-cross-the-road-or-not  You can also subscribe to the blog by providing your email address here.

About the Study:
Researchers from Penn State, U.S. Geological Survey, Pennsylvania Game Commission, and Pennsylvania DCNR Bureau of Forestry will be monitoring deer populations and forest changes in Rothrock, Bald Eagle, and Susquehannock State Forests. By carefully monitoring deer populations and diversity and growth rates of forests in these areas, this study will lead to a better understanding of the complex relationships between our state’s deer herd and the forest.

Deer are an important part of Pennsylvania’s forests. However, too many deer can change forests in ways we may not like — for example, by eating too many seedlings of some tree species. But deer are not the only issue. Forest managers have to deal with problems such as invasive plants, insect outbreaks, soil acidity, and tree diseases.

Four study areas, ranging in size from 25 to 40 square miles, have been selected. One pair of study areas is in the center of the state, in the Rothrock and Bald Eagle State Forests, and one pair is in the north, in the Susquehannock State Forest.

Deer in these study areas will be managed differently with the help of hunters.  Forest conditions will be monitored to see how they respond to real-world deer and forest management activities. During the study, researchers from Penn State, the U.S. Geological Survey, the Pennsylvania Game Commission, and the Pennsylvania DCNR Bureau of Forestry will carefully monitor deer populations and changes in the species mix and growth rates of plants in the study areas.

Timeframe:
Fieldwork began in January 2013 with the capture and radio-collaring of deer. During May-August 2013, eight field technicians began collecting vegetation data on 200 permanent plots (50 per study area).  These permanent plots will be revisited every other year.  Additional monitoring of areas with planned timber harvests will begin in 2014.

Current funding will support the project for the period 2013-2017. We expect to start to detect changes in vegetation in years 3 and 4 of this study. Ideally, this project should be continued beyond the initial 5-year study period to better understand how forest management conditions respond to management actions over many years.
Posted by David R. Jackson at 2:40 PM No comments: