Deer and Motorists on the Move at the Same Time 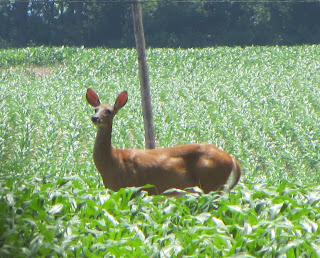 With the days getting shorter and the whitetail rut kicking in motorists are driving to and from work at the same time deer are most active. Collisions between vehicles and wildlife are a big problem. Each year, on average, 1-2 million collisions with large animals, especially deer, end in 200 fatalities, 26,000 injuries, and costs exceeding $1 billion.

Deer see things differently, instead of tracking movement by following objects with their eyes as people do, a deer’s eyes are stationary. This allows deer to detect movement from predators that may be lurking. To a deer, a car heading into its path may only seem like an object that’s increasing in size. Deer also see less detail than humans. And a deer’s keen night vision results from an ability to take in a lot of light, which makes headlights blinding.

Dawn and dusk are active times for many wildlife species, including deer, which is the time when people are traveling to and from work this time of year. Choice deer habitat often overlaps with human travel routes, increasing the likelihood of collisions. In addition, deer movement peaks in the fall — mostly October and November — with the breeding season, called the rut.

The Forest Service produced and award-winning video entitled Avoiding Wildlife-Vehicle Collisions for their employees. The video provides information relevant to anyone who gets behind the wheel at dawn and dusk this time of year. Knowing the risk factors can help inform you how to manage your driving situations to reduce the risk of collisions with wildlife.

Posted by David R. Jackson at 5:23 PM No comments:

Fall is a time to get outdoors and enjoy the cooler weather unfortunately, it is also a time when adult ticks are active.  To protect yourself and prevent tick bites, Penn State Extension entomologist Erika Machtinger, has provided a new fact sheet that includes information about ticks and how to protect yourself and your family from tick bites. The fact sheet is entitled Ticks and Tickborne Disease.  In addition, it includes information on the many species of ticks that occur in Pennsylvania and the diseases ticks can transmit.

Many species of ticks occur in Pennsylvania. The most common are black-legged (deer) ticks, American dog ticks, lone star ticks, and groundhog ticks.

Ticks can transmit pathogens that cause disease in humans and animals. The most recognizable of these diseases is Lyme disease, which is caused by Borrelia burgdorferi, a member of the family of corkscrew-shaped bacteria known as spirochetes, and transmitted by blacklegged ticks.

Other pathogens may be carried by ticks and transmitted at the same time. It is possible to have multiple infections from different pathogens.

This article includes basic information about ticks and how to protect yourself and your family from tick bites.