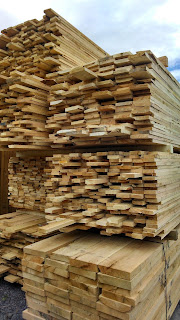 As part of their series on the forest industry in the state, West Virginia Public Radio spent some time at Allegheny Wood Products' Sawmill and Pellet Mill in Kingwood, WV. The resulting article and audio segment are a quick tour of a modern wood processing facility. Check it out.

In the next part of our occasional series on the timber and forest products industry – from seedlings to final products, we follow cut logs to one of West Virginia’s most sophisticated sawmills.  Independent producer Jean Snedegar spent some time at Allegheny Wood Products’ Kingwood Sawmill and Pellet Mill, with plant manager, Mark Wilson.

To read the full story and listen to the audio click here.
Posted by David R. Jackson at 1:44 PM No comments:

Greetings on the day before Thanksgiving.  A friend (retired forester) sent me this short video on the miracle of Yellowstone National Park. Old news but interesting nonetheless.  It appears to be quite controversial as I found that some scientists claim the video gives the wolves way too much credit.  I provided a news release below so you can read up on it.  I couldn’t help but think how this might apply to deer and vegetation dynamics in Pennsylvania.  Enjoy it and have a safe holiday.

YELLOWSTONE NATIONAL PARK, Montana — A casual visitor might not notice big changes at Yellowstone National Park in the years since wolves were reintroduced in 1995.

The scenery is still fabulous and soul-stirring. The bison — or buffalo — still roam and the antelope play. The steaming hot springs are still cooking and the geysers still deliver faithfully to thousands of visitors every day.

But if visitors were to follow veteran park biologist Doug Smith into a thicket of willows alongside certain streams, change might literally slap them in the face. And it may be thanks to wolves.

"This has been explosive or dramatic willow growth in here and, to a degree, aspen as well," Smith said as he plowed through a dense tangle of branches. Twenty years ago the willows were just a few inches high, he said, "and now they're, well, almost twice as high as I am."

The possibility that wolves are at the heart of the change has fueled a number of scientific studies and, as almost anything about wolves typically does, it has provoked significant controversy.

Are wolves responsible for a "miracle" that "changed the rivers" of Yellowstone? That provocative claim in a YouTube video that's been widely seen over the past two years has ignited excitement about the impact wolves have had in the 20 years since park biologists brought back the hungry predators.

It's a fascinating and controversial scientific issue, entirely separate from the political battles that have raged around wolves. Ranchers, environmentalists and others have long fought over what the wolves destroy: wildlife and livestock.

The alleged "miracle" is that wolves have had the opposite effect on some species of plants and animals, encouraging biological diversity and abundance.

Willows and aspens
Some scientists say the explosive growth of willows and aspens in some areas of Yellowstone is a clear example of a trophic cascade, a sequence of ecosystem effects triggered by top predators like wolves that ultimately trickle down to other players in the environment.

"How do carnivores — wolves and cougars and bears — impact plants? They don't eat plants," Smith said, quickly answering his own question. "They do it indirectly, by impacting the animals that eat plants. In this case, it's elk."

Herds of elk are a photographer's favorite and a tourist delight in Yellowstone.

"Those animals are cute," said a young tourist as she and her mother watched several elk munching plants alongside Yellowstone's scenic Madison River.

But a generation ago, there were so many elk that they were a sort of biological blitzkrieg, doing heavy damage to their own habitat. Twenty years ago there were about 20,000 elk in northern Yellowstone, munching up vast amounts of willows and aspens. Since then, elk numbers have been cut down by about three-fourths.

"That decline in elk reduced elk eating willows and these willows have just shot up, exploded," Smith said.

That's where the controversial YouTube video comes in. Titled "How Wolves Change Rivers," the 2014 video is narrated by British writer George Monbiot. It gives wolves credit for profound ecological changes.

"As soon as the wolves arrived, even though they were few in number, they started to have the most remarkable effects," Monbiot says in the video."

The video has been viewed 25 million times in the past two years. It describes dramatic improvement of habitat for a host of creatures. "Rabbits and mice began to rise," the video says, "which meant more hawks, more weasels, more foxes, more badgers."

As the video climaxes, it says, "The wolves changed the behavior of the rivers. They began to meander less. There was less erosion. Their channels narrowed. More pools formed." That helped stabilize river banks and fix the rivers in their courses, the video contends, "So the wolves, small in number, transformed not just the ecosystem of the Yellowstone National Park, this huge area of land, but also its physical geography."

Not so fast
Wildlife ecologist Dan MacNulty of Utah State University takes issue with the video's sweeping statements. "It's an exaggeration," he said. MacNulty has been studying Yellowstone wolves, and what they eat, for 20 years and believes their powers are often overestimated.

"They're not supernatural predators, and people get that impression from films," he said.

He believes both wolf lovers and haters exaggerate their impact. "So basically, you have two different views that are wrong for the same reason."

Wolves have definitely played a role in reducing the elk population, MacNulty said, but it's an open scientific question how big a role other predators played.

"Cougar numbers have increased, grizzly numbers have increased," he said, arguing that those other predators may be partly responsible for the decline of elk. MacNulty also notes that Montana permitted more aggressive elk hunting by sportsmen since the mid-1990s. On top of that, elk numbers may have been reduced by a changing weather pattern, noting drought could drive down the elk population.

Smith agrees wolves shouldn't get sole credit. But he appreciates the YouTube video for bringing a complex topic to the public.

"The video that shows 'Wolves Change Rivers' is a little bit far-flung," Smith said. "You have to put a lot of imaginative and creative pieces together, but there is a pearl of truth to it."

The controversial video seems partly based on the work of professors William Ripple and Robert Beschta from Oregon State University, and they stand by the main theme.

"We have observed changes in streams. … We expect changes in the courses of rivers to occur, as plant communities improve following the return of wolves," Bescheta said in email to KSL and the Deseret News.

Of course, most of the land area of Yellowstone is not covered by small, meandering creeks lined with aspens and willows. The changes to those species apply only to a small percentage of the land. But that doesn't mean the changes are inconsequential.
16 comments on this story

"These are what we call biodiversity hot spots," Smith said. "These areas provide a lot of habitat for other plants and animals. And this has impacted a lot of animals. That has an outsize effect on the entire area."

Some stream-side areas have not recovered in recent years, possibly because some locations don't get enough water.

MacNulty acknowledges that the wolves have had a significant impact in some areas. But he believes it will be decades before science can provide definitive answers about the power of wolves in remaking the environment.
Posted by David R. Jackson at 10:00 AM No comments: 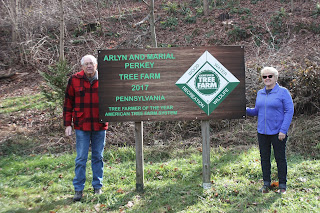 To read about past Pennsylvania Tree Farmers of the Year visit the PA Tree Farm Program web site.
Posted by David R. Jackson at 8:38 AM No comments: