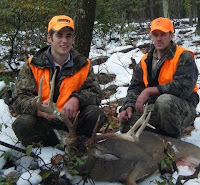 HARRISBURG – The Pennsylvania Board of Game Commissioners today gave preliminary approval to hunting and trapping seasons and bag limits for 2010-11, including broad changes to deer, bear, turkey and small game seasons.

The public may offer comments on all proposed 2010-11 seasons and bag limits, as well as other Board actions, between now and the Board’s next meeting, April 19-20, at which time the Board will finalize seasons and bag limits for 2010-11.  Also, the Board will take action on setting antlerless deer license allocations for the 22 WMUs at its April meeting. Deer harvest estimates for the 2009-10 seasons will be available in mid-March.

Following are highlights that could have a dramatic affect on the 2010/2011 deer season.

The Board of Game Commissioners gave preliminary approval to a slate of deer seasons for the 2010-11 seasons that includes adding Wildlife Management Units (WMUs) 2C, 2E, 4D and 4E to the split five-day antlered deer season, Nov. 29-Dec. 3, and seven-day concurrent season, Dec. 4-11.  Those WMUs now part of the split season structure are WMUs 2C, 2D, 2E, 2G, 3C, 4B, 4D and 4E.  The proposed package retains the two-week (12-day) concurrent, antlered and antlerless season in the remaining 14 WMUs.

Based on a motion by Game Commissioner Thomas Boop, the Board directed staff to prepare for its April meeting to suspend the issuance of Deer Management Assistance Program (DMAP) antlerless deer permits to public landowners, unless an approved management plan is in place.  Boop noted that this action does not impact private landowners ability to enroll in DMAP, which enables landowner to address deer management objectives on their properties. (PA Game Commission: 1-26-2010, http://www.pgc.state.pa.us/)