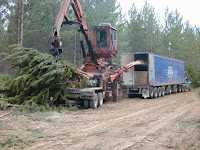 The Forest Guild just released their Biomass Retention and Harvesting Guidelines for the Northeast. This work synthesizes and builds on two previously released companion reports: Ecology of Deadwood in the Northeast (May 2010, a review of the science) and Revised Assessment of Biomass Harvesting and Retention Guidelines (April, 2010, a review of current state and foreign country biomass harvesting guidelines). All three reports may be found at the Forest Guild’s website.


Related, a report from Manomet Center for Conservation Sciences will soon be released – a note from the Florida Forestry Association’s Forestry Friday (5/28/10):

"The Manomet Center for Conservation Sciences is scheduled to complete a "six-month study" of biomass energy very soon. All eyes are on Massachusetts where the state formally suspended the review and permitting of proposed biomass power plants for approximately one year to allow time for the Manomet report. The thrust of the questions Manomet would answer: Is biomass—specifically, power produced from burning wood (and, in some cases, construction and demolition debris)—renewable, sustainable and carbon-neutral? Early reviewers on the draft say the soon-to-be-released study by conservation scientists could be a game-changer and deliver a serious blow to the woody biomass industry."