UPDATED Timber Tax Tips - what is the update? 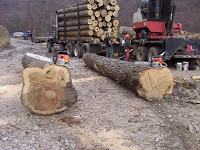 The US Forester Service , Cooperative Forestry Section recently updated their Tax Tips for Landowners for the 2010 Tax Year based on the bill that was recently signed into law extending the Bush tax cuts for an additional two years.  Below is an explanation of the updates from Dr. Mike Jacobson, Assiciate Professor of Forest Resources at Penn State University.

"Some of you may have heard and have been wondering “what is the update?” The only change in this timber tax update from the previous version sent out last October is the depreciation allowance if you are in the business. Now, for qualified businesses you can elect to expense up to $500,000 in the first year, given certain limitations. It was up to $250,000 before the Congress acted in December. As you know the Bush tax cuts are extended for two years which left most income tax consequences the same as what they were in previous years. If the tax cuts hadn't got extended capital gain and ordinary income rates would have changed. The big change was the estate tax rules which now excludes up to $5 million per spouse at a 35% rate. In 2010 you know there was no estate tax.  Remember, one change that did take effect in 2010 is that all timber sales, regardless of type of sale, now require a 1099 form. So if you sold timber in 2010 make sure that the buyer gives you a 1099." (Dr.Michael Jacobson, 1-6-11)
Posted by David R. Jackson at 9:04 AM