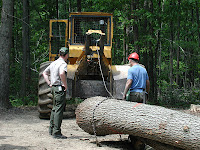 Having recently answered a number of questions from a landowner concerning timber theft I thought I would share a few resources with my readers that may be helpful in the event timber theft happens to you.

The best prevention is to make sure your property lines are well marked with surveyor ribbon and tree marking paint.....ribbons can be pulled down and moved but paint it more permanent.  Most paint last 3-5 years so be sure to freshen the markings often. 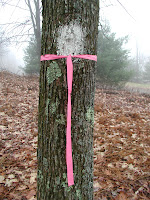 Here are some good resources I came across while doing a search.
Timber Trespass by Mark Bodamer, Forester, DCNR Bureau of Forestry
Timber Theft in Tough Times: A Growing Concern for Landowners and Farmers by Richard Triumpho, Farming Magazine, June 2010.
Timber Theft and Trespass by Jeff Stringer, University of Kentucky, Department of Forestry

Lastly, here is an interesting article that appeared on NorthCountryNow.com on February 16, 2013.
Timber theft a fact, but aware St. Lawrence County forest land owners can protect themselves by Paul Hetzler.

Only the crunch of gravel mars the predawn quiet as a truck, headlights off, rolls to a stop. Working quickly, professional bandits round up your unsuspecting timber. As your herd of prized trees is prodded toward the tailgate ramp, their soft mewling is barely audible amidst all the rustling…

While it does at times parallel cattle rustling, with skilled thieves whisking away a few exceptionally valuable trees in an early-morning or weekend raid, timber theft encompasses more than outright banditry. How much more, exactly, is a matter of debate. There are still law enforcement agencies which view a clear-cut (so to speak) timber theft, even one that amounts to tens of thousands of dollars (According to a 2007 SUNY ESF survey, the average value of timber in NYS stolen per event was $10,650.), as a civil matter akin to a boundary dispute. On the other hand, some foresters believe that every timber sale not conducted by an honest forester is theft. All agree, though, that this crime is a theft that keeps on taking, in that it can undo years of good management, and require decades for recovery.