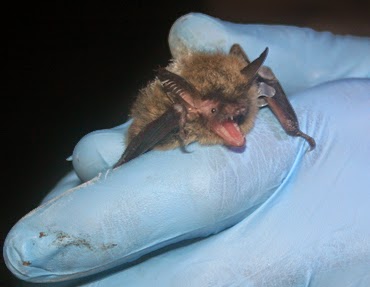 FWS.gov (April 1): The US Fish and Wildlife Service has announced it is protecting the northern long-eared bat as a threatened species under the Endangered Species Act. This is primarily due to the threat posed by white-nose syndrome, a fungal disease that has devastated many bat species populations.

At the same time, the FWS issued an interim special rule that eliminates unnecessary regulatory requirements for landowners, land managers, government agencies, and others in the range of the northern long-eared bat. The public is invited to comment on this interim rule as the FWS considers whether modifications or exemptions for additional categories of activities should be included in 4(d) rule that will be finalized by the end of the calendar year. The FWS is accepting public comments on the proposed rule until July 1, 2015 and may make revisions based on additional information it receives.

“In making this decision, we reviewed the best available scientific information on the northern long-eared bat, including information gathered from more than 100,000 public comments,” said the Service’s Midwest Regional Director Tom Melius. “We are listing this species because a disease – white-nose syndrome – is spreading and decimating its populations. We designed the 4(d) rule to provide appropriate protection within the area where the disease occurs for the remaining individuals during their most sensitive life stages, but to otherwise eliminate unnecessary regulation.”

The listing becomes effective on May 4, 2015, 30 days after publication of the final listing determination in the Federal Register.

To read the full story click here.
Posted by David R. Jackson at 8:51 AM