A recent news release listed in the Society of American Foresters E-Forester (11-6-15) noted that north eastern forests that had been damaged by acid precipitation are finally making a comeback.  The US began passing environmental legislation to try and control the problem more than 40 years ago.  A study published in Environmental Science and Technology entitled "Declining Acidic Deposition Begins Reversal of Forest-SoilAcidification in the Northeastern U.S. and Eastern Canada" led by the USGS recently released their findings.  They examined soils on 27 sites in both the US and Canada.  All the sites have been experiencing decreasing levels of acid precipitation over the past 8-24 years.  They found aluminum concentrations (a sign of acid rain damage) declined while the pH in upper soils layers has increased across virtually all sites.  Lead study author Gregory Lawrence stated, “Recovery is happening. We’re still trying to figure out how much capacity these ecosystems have to recover, but there’s no question that decreases in acidic deposition are having a positive effect.”  This is good news.  This research offers promising evidence that soils may indeed be rebounding to pre-acid rain conditions.

To read the full story from gizmodo click here.

What is acid rain? 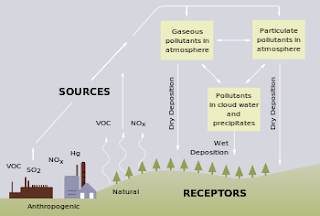 Acid rain is any form of precipitation that is unusually acidic, meaning that it possesses elevated levels of hydrogen ions (low pH). It can have harmful effects on plants, aquatic animals and infrastructure. Acid rain is caused by emissions of sulfur dioxide and nitrogen oxide, which react with the water molecules in the atmosphere to produce acids. Governments have made efforts since the 1970s to reduce the release of sulfur dioxide into the atmosphere with positive results. Nitrogen oxides can also be produced naturally by lightning strikes and sulfur dioxide is produced by volcanic eruptions. The chemicals in acid rain can cause paint to peel, corrosion of steel structures such as bridges, and erosion of stone statues. (wikipedia.org)