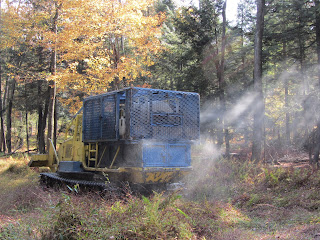 I wanted to share with you an update concerning the herbicide active ingredient Gylphosate. Gylphosate is the active ingredient in the original "Roundup" herbicide by Monsanto. It is found in many, if not hundreds, of generic brands today. Many brands of glyphosate have "forest" labels such as Accord XRT II and Rodeo, both by Dow AgroSciences.  Some glyphosate products, such as Rodeo, also contain aquatic labeling.

Glyphosate was one of the first herbicides studied in Pennsylvania for controlling interfering understory vegetation such as fern, striped maple and beech in Allegheny and northern hardwood forests. It was found to be very effective, especially when mixed with sulfometuron methyl (e.g., Oust XP), in controlling many interfering understory plants. It is used widely today in site preparation and release treatments including the control of exotic invasive plants. Without the use of this herbicide regeneration of hardwood forests on many sites would be all but impossible. It may be one of the most commonly used herbicide active ingredients in forestry, not to mention its use in agriculture which far exceeds the forestry use.

A recent declaration by the International Agency for Research on Cancer (IARC) prompted Acting Director Lauren Zeise of the California Environmental Health Hazard Assessment (OEHHA) to add glyphosate to the state’s Proposition 65 list of chemicals that are “known to the state of California to cause cancer.” Monsanto is now suing California over the proposed rule and wants a California court to prohibit a state listing of glyphosate as a known carcinogen.

At the heart of Monsanto’s complaint is how OEHHA arrived at its determination and the apparent reversal of opinion within the agency over the toxicity of glyphosate. In response to the OEHHA proposal and as part of public comment, Monsanto presented 15 pages of annotated and footnoted comments to the agency late last year, saying effectively that peer-reviewed science does not support listing glyphosate as a carcinogen. Even OEHHA said as much within the past 20 years. In 1997 and again in 2007, the state agency said that glyphosate is “unlikely to pose a cancer hazard to humans.” Four separate studies cited by the IARC and numerous entities agreed that glyphosate was not linked to tumors in laboratory tests.

We will have to continue to follow the ruling. If glyphosate is found to be cancer causing this could change the way weeds are treated in both forestry and agriculture.

Read the full story by clicking here.
Posted by David R. Jackson at 9:35 AM