I thought my readers might enjoy this news story printed online for the Tribune Review, Sunday, November 20, 2016. It was sent to me by a colleague of mine. It is essentially the same conversation I was having with folks at a Sustainable Forestry Initiative logger training course on Sustainable Harvesting Practices just this past fall. If it’s in the news, it must be the best way of doing things!  Right? Give it a read and listen to the video and let us know what you think. Maybe we could change the title to something more fitting.

Be sure to contrast this article with the post by Dan Pubanz from April 27, 2016 entitled “Why the Forestry Profession Should Harshly Criticize High-Grading.” Also, if you haven’t already red it, be sure to read the article by Dr. Jim Finley posted on June 21, 2016 entitled “Describing Sustainable Timber Harvesting: What do Words Mean?” 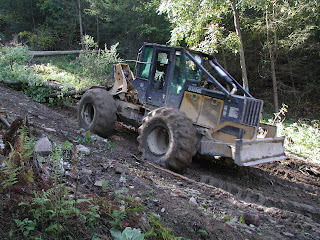 A succession of loud snaps from crashing limbs are followed by a final thud as a crew of Amish loggers cut century-old hardwood above Route 56 in Lower Burrell. Although youth football fans who regularly line Flyers Field might not consider the surrounding hillside a forest, to a forester, the heavily wooded area certainly qualifies. And the mature hardwood trees are ripe for select cutting.

It's a common practice, as Pennsylvania is the largest producer of hardwood lumber in the nation, according to the state's Department of Conservation and Natural Resources' Bureau of Forestry. The commonwealth's $20 billion per year forest products industry employs about 100,000 Pennsylvanians.

“Any forest is a large garden; you pick the mature fruit,” said Tom McQuaide of Torrance, a consulting forester for Pennsylvania Forest Management timber and log sales. He is contracted to cut and sell the logs, taking bids from sawmills throughout the state.

The selective cutting of hardwood is a common way to harvest some mature trees and open up the canopy for younger upstarts, he said. “We don't like to waste them,” he said. “Overly mature trees are rotted inside.” McQuaide was hired by a private landowner to selectively cut on the crown of the hill above Flyers Field along Route 56 in Lower Burrell. They limited their activities so the cuts wouldn't change the view at the field.

A pile of red oak, basswood, white ash, hard maple and other logs sat in a staging area near Route 56. “We cut some of the nicest hardwood timber in the world,” McQuaide said. Jeff Woleslagle, spokesman for the state forestry department, agreed: “While the forests of Pennsylvania grow a variety of hardwoods, its cherry and oak are truly world class.”

McQuaide pointed to a red oak log. It's in great condition, with tight annual rings in the washed-out, red center. “This will go into furniture — a table or cabinet,” McQuaide said. No one will know for sure until the giant logs are cut lengthwise at a sawmill, then inspected for quality.

But before then, there's a lot of work for McQuaide and his crew as they take down the trees he marked beforehand. The Amish workers cut and dragged the logs with a skidder outfitted with chains on its front tires to conquer the steep terrain. Nathan Barrett, a timber harvester from Dayton, Armstrong County, carefully sharpened the teeth on the 20-inch bar of his chain saw.

The oldest tree he felled in the last week at the site was a 150-year-old red oak. Before he cut a 50-foot hard maple, he read the layout of the forest, such as the nearby slim cherry trees to find the path of least resistance and safety.

As Barrett checked out the direction of a cut and fall, McQuaide said, “You can drop it across the road and top it. That's where it wants to go.” With a loud splinter, the oak fell predictably into the cherries, then to the forest floor. After a few weeks of cutting this month, the fruits of the crew's labor were a little more than 100 trees over 25 acres. That will translate into 60,000 board feet.

Dear Ms. Thomas,
Your November 20 article, “Logging Effort above Route 56 in Lower Burrell a Labor of Love,” has reached far and wide. Since its release, I have received notes from several colleagues and it was even listed on the Society of American Forester’s eForester website.

As a bit of background, I am the Ibberson Professor of Forest Resources at Penn State, Pennsylvania extension forester, and the Director of the Center for Private Forests at Penn State. My entire career has focused on the sustainable management of forests.

There are many threats to the sustainability of Pennsylvania’s forests – insects, diseases, wind, weather, parcelization, and timber harvesting. As a forester, I understand silviculture, which is the art and science of managing tree species composition, forest structure, growth, and regeneration or renewal. Harvesting is the tool of silviculture and should lead to improved forest conditions or set the forest on a path for renewal. Unfortunately, too often select harvesting is the chosen tool for prescribing timber harvest treatments. In a select harvest, the focus is on what to remove and not on what to leave for the future of the stand and in the process it tends to lead to “taking the best and leaving the rest.”

The harvest described in your article focused on taking the “biggest trees” of some species (red oak, maple, poplar, and cherry for example from your piece) and leaving the smaller trees to grow for some future harvest. This approach and argument is flawed. Most of Pennsylvania’s forests are, in forestry parlance, even-aged. In an even-aged forest, tree diameters will vary widely; however, most people interpret diameter as representing age. So, a harvest designed to take the biggest trees first is akin to culling the fast growing trees first. Or, said another way, it is like taking the winners of the Kentucky Derby to market and leaving the losers to grow and breed for future races.

If you had the chance to study forest stand development, you would see that some tree species grow faster than others and those trees generally require more light to germinate and grow. A select cut takes those trees first. Doing this often reduces species diversity. Sometimes with only one select cut an entire species cohort is lost. With repeated select cuts diversity is sure to be reduced. Then too, with select cutting, taking the biggest and best of the species, seed source is sure to be lost and there is seldom enough light on the forest floor to allow seedlings of light loving species to develop. The bottom line is that while select cuts sound good, they end up depleting the forest and leading to unsustainable outcomes.

Select cuts focused on the treatment described in your article do not represent the “love” you conveyed; rather, they are abuse of the forest. Others hear the term “select” cut and the logic seems right, but it doesn’t work. As a result, too many harvests are leading to less healthy, less resilient, less sustainable forests for the future, and, yet, people think it is the right thing to do.

I’ve attached two articles to this note that warrant sharing with your readers. I appreciate that they fly in the face of your earlier piece. Forest owners deserve to hear another perspective on caring for our forests today so that future owners and others enjoy healthy and diverse forests tomorrow.

If you would like to discuss this perspective further, I would be happy to talk with you.

Thanks for taking the time to read and consider my concerns and the concerns of my colleagues who shared your piece with me.

The comments by Jim Finley show that there is still a significant difference of opinion between practicing foresters and Penn State Forestry when it comes to select cutting. However, I would make the observation that many of the foresters advocating select cutting are Penn State graduates who are adapting to the realities of commercial timber harvesting. Their purpose is to generate reasonable income while keeping both short and long term regeneration in mind.

We landowners have no ax to grind, and are trying to adapt to what makes good sense.
As described in my previous posts, the logic presented by Jim Finley is contradicted by experience in managing my 400 acres woodland parcel in Centre County. As a refresher, the first hardwood harvest on this parcel in the history of the earth was conducted in 1995 and a second one was completed in December 2016. Select harvests were performed both times and the volumes and monetary values were nearly identical.

Concerning the conclusion that smaller diameter remaining trees are unhealthy, I recall a visit I had with Jim Stiehler, a state forester, in the early 1990s. We were touring the property and standing near some white oak stumps where a small quantity of firewood had been taken to widen a trail. He pointed out that two of the trees were of different diameter, and gave me a quick lesson in how one same-age tree dominates the growth of another nearby by capturing the light, and how the less dominant is not necessarily unhealthy but grows more slowly. However, it is true that some of the less dominant may get choked out and die, but this just contributes to the nutrition of those that remain.

After our first harvest in 1995, I noticed that what we had left was a lot of healthy smaller diameter trees. The same is true after the recent harvest.

I recognize that there is a real possibility that the next regeneration may not be as robust as the first, and the time might come when a clear-cut is advisable. However, it obviously was not the thing to do in 1995.

In my opinion, generalized policies should be viewed with caution, and sound practices should be tailored to each situation. For example, in my frequent travel from Northern Virginia to Centre County, I see a lot of mature woodland where clear-cutting is the only sensible method of harvest. This is because the forests have matured to the extent that there are no small trees and the understory barely exists.

This is illustrated along Route 350 as you climb the mountain from Bald Eagle to Sandy Ridge. Most of the game lands woodland that you can see has never been harvested and is over-mature. Near the summit, a limited area has been clear-cut and the regeneration is spectacular.

In the case of harvesting in Lower Burrell, long term regeneration was likely less important than retaining 25 acres of beautiful woodland to look at.