The dreaded chronic wasting disease has shown up for the first time in wild deer in Clearfield County, the heart of Pennsylvania’s traditional hunting territory and adjacent to the state’s famous elk herd.

At a press conference held by the Pennsylvania Game Commission Thursday, officials said the very future existence of whiteailed deer and elk in Pennsylvania is at stake. "We've got a big problem. The threat is real. The situation is potentially dire," said Wayne Laroche, the Game Commission's wildlife-management director.

A mature buck in Bell Township, Clearfield County, was shot by a Game Commission officer on June 7 on State Game Lands 87 after it showed signs of being diseased, the agency said. The deer tested positive for chronic wasting disease, a disease that is always fatal to infected deer and other members of the cervid family, including elk. It's highly likely that means other wild deer are infected, Laroche said.

CWD had been found in captive deer at two different locations in the region in Jefferson County in 2014, but this is the first case of an infected wild deer. Besides being bad news for hunters in the big woods counties of the state, the Game Commission also is worried now that the disease has spread closer to the state’s elk herd. The infected deer is only 10 miles from the nearest elk herd.

Deer-hunting in Pennsylvania is a $1.6 billion industry. And tourism surrounding viewing elk has become a linchpin in local economies in northwestern Pennsylvania. More than 100 elk are tested annually for CWD and so far none has been found with the disease. But the history of CWD in other states has been to continue to spread despite efforts to stop its progression by killing local infected populations.

That's because saliva and feces and urine that spread the disease is easily picked up by deer because they are social animals. And the disease can remain on the ground for up to 15 years, Laroche said. "Everywhere it has always increased. There are no examples of it burning itself out." At best, wildlife managers can keep the disease controlled, he said. 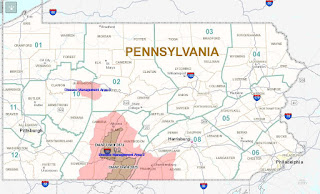 The Commission reacted to the bad news by announcing a program to kill deer in the immediate vicinity with sharpshooters and to issue 2,800 deer permits for hunters to kill deer in the 350-square-mile Disease Management Area 3 this fall. "It's important our response is as effective and efficient as possible to attempt to curtail this disease before it becomes well-established in an area where it not only is a threat to our deer, but also our elk," said Laroche.

The Game Commission said 2,800 extra Deer Management Assistance Program permits for hunters to kill antlerless deer in the upcoming seasons will be made available, likely beginning today. The agency asked for hunters to let them know where the deer are killed so the deer can be tested for CWD.

Sharpshooters likely will be used after the deer seasons end. CWD has been an increasing threat to whitetail deer in Pennsylvania and has also been found in 51 free-ranging deer so far in southcentral Pennsylvania since 2012. Some 25 wild deer were found in 2016.

Pennsylvania hunters reacted to the news with alarm and some with criticism of Game Commission tactics to fight the spreading disease. "As I have been saying for awhile now, CWD has long been established throughout Pennsylvania. There will be no containment plan that works. All of the current solutions have proven to not do much, yet the PGC continues to forge ahead with failing plans," said one Pittsburgh member of the HuntingPA.com outdoor forum on the Internet.

Another hunter from Elk County countered with, "There is little doubt it is going to eventually spread across most and perhaps even eventually all of the state but the people who have studied the subject know it can be slowed greatly by following the action plan in place by the Game Commission." Another blamed the mess on captive deer farms that raise private deer herds to sell to fenced-in private hunting preserves.

"The only reason it is in this state and spreading is from deer farms and transporting those deer. Every captive deer should have been killed years ago and anyone moving one over the border should be locked up and fined to the max."

There is no vaccine to prevent deer or elk from contracting CWD, which is spread by body fluids. To date, there is no evidence CWD can be transmitted to humans. However, the Game Commission advises hunters not to eat meat from animals known to be infected with the disease.

For more on CWD go to: